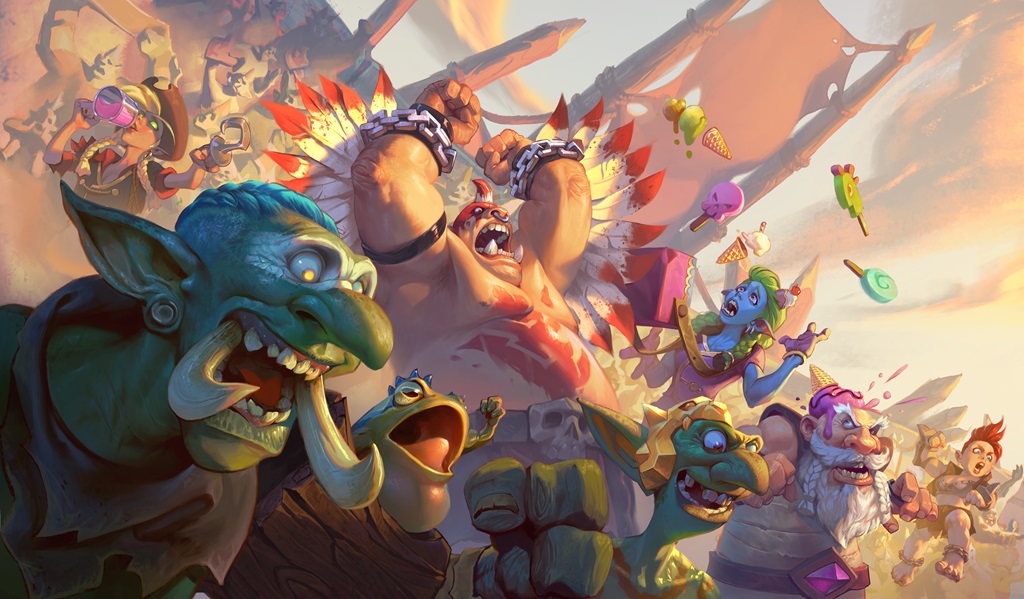 ‘[We] love that new card games are made every year’

It feels like Hearthstone has been around much longer than four years. With myriad expansions under its belt, a ton of support and a thriving eSports scene, it’s had a major impact on how studios approach the card game space, both in terms of platform availability (mobile editions are pretty much assumed now by the playerbase) and overall market strategy.

But with competitors like Artifact and Magic: Arena lurking about, I wanted to get a sense as to how Hearthstone fits into the digital card game space in 2018.

I had the chance to speak with Mike Donais, Lead Designer and Peter Whalen, Lead Initial Designer on how Hearthstone was coming along, and in typical Blizzard fashion they don’t seem scared of the competition. When asked about the impact that Magic: Arena will have when it exists beta and throws its $10 million eSports commitment around, Donais responded, “I love that new card games are made every year and try to play as many as I can so that I can learn design lessons from each of them. Seeing all these games with fun new ideas inspires us to keep doing even better. The new expanded card game audience has been great for us too. More people talking about card games and playing them has led more people to check out Hearthstone too.”

Building on that idea of going all-in, I also quizzed the team on the value of restraint. Hearthstone has a good cadence of bringing in new ideas without going overboard, and Donais agrees that it’s an approach that’s served them well so far. He notes that they like going with keyword mechanics in particular and that only having to learn a few new concepts cuts down on the complexity level, which helps newcomers acclimate.

Whalen shines a little light on an idea that was originally slated for the latest Rastakhan’s Rumble expansion, but was scrapped: “We always try a bunch of different mechanics in each expansion and then release the ones we’re most excited about. For Rastakhan’s Rumble, we tried a lot of variants on Loa [Troll God] – we had a version where when the Loa died they’d go dormant and give you an effect for the rest of the game. That ended up being frustrating since you had few ways to interact with it, so we moved it off the Loa and onto the Spirit but restricted it to just Stealth for one turn. We also explored a few other keywords that just ended up not fitting the expansion well enough. One of them was “Prophecy”, to capture the Witch Doctor vibe of Trolls. Cards with Prophecy would add a really powerful thing to the top 3 cards of your deck that would cast automatically when drawn. It was a kind of delayed payoff that was an interesting mechanic but ended up not really making sense in the Rumble setting.”

When asked about one individual card that Blizzard thinks will shake the meta up the most, the answer was unequivocally Zul’jin. For those of you who don’t play, Zul’jin, in addition to being one of the most iconic trolls in the Warcraft lore, is also the only hero card in the Rumble expansion, capable of shifting your current hero into Zul’jin himself, complete with a new hero power and a formidable battlecry. As a 10-cost card you need to survive until he’s casted, but once that happens you’re in pole position.

Donais explains why this particular card is going to have an impact while also sharing a few other powerful archetypes: “There are a couple new deck themes in each class, and I have a ton that I have already been experimenting with. Zul’jin has been the most popular card this expansion by far – and not just in pure spell decks, he is also showing up in Hunter decks that have some minions. I have also been playing some Paladin Shirvallah, the Tiger decks; there are at least three different ways to build that deck and I don’t think people are done experimenting with Shirvallah just yet. The other deck I have been playing a lot is a Priest Quest deck with Princess Talanji that the Hearthstone streamer J4CKIECHAN made popular.”

As for the decision to go with a Troll expansion in the first place, Donais says that they “wanted to do trolls for a long time,” and had “talked a lot about animals and spirits and Loa.” Eventually they reached the decision that all nine classes would battle for supremacy in the arena and eventually started choosing Loa that represented each one to fit that theme. The fact that it slotted nicely into World of Warcraft: Battle for Azeroth‘s launch was a “bonus,” for Blizzard. Collaborations are commonplace at Blizzard, so they talked with the WoW team who were able to provide suggestions and tweaks for Rumble.

Finally, I had to close by asking about the status of the dusting system four years later. Some feel that it’s too slow to dole out rewards, but Donais and his team think it’s just right: “We love the flexibility of the system because players like to collect and play in different ways. Our goal is to give the maximum amount of flexibility. Some love golden cards, some love Standard, some love Wild, some play all classes, while others only play half the classes. We also like that it doesn’t put any pressure on the player to go out and find good deals on single cards. Additionally, part of the fun of Hearthstone is the ability to look at your collection and use what you have, but at the same time, if a player really wants that powerful Epic or cool golden card then they can craft it.”