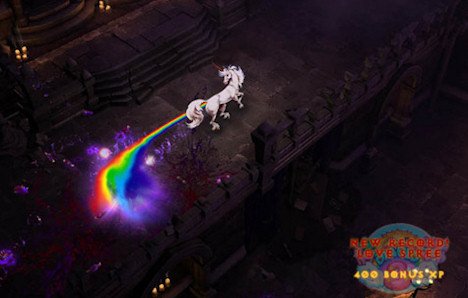 The controversy surrounding Diablo 3 has been utterly ridiculous, and nobody seems to know that more than the developer itself. Blizzard has been poking fun at purist “fans” who complained about the game’s artistic style for a while now, and the joke has come to a head with these mocking screenshots.

As Diablo obsessives whine and moan that Diablo 3 isn’t dark and ugly enough to be a proper sequel (even bitching about realistic rainbow effects), the game’s community manager has poured several tanks of gasoline on the fire by showing fans two Diablo 3 screens with special enhanced features, such as unicorns that sh*t rainbows and a special “love spree” bonus meter. The results are quite hilarious, and will definitely take some of the snobby aggressors down a peg or two.

At least most of the Battle.net forums where these were posted found the situation funny and not some sort of grave insult. Personally, I feel that anybody who looks at that image of a demonic, mace-wielding Marshmallow Man without laughing should be covered in boiling hot marmalade and thrown into a nest of wasps.