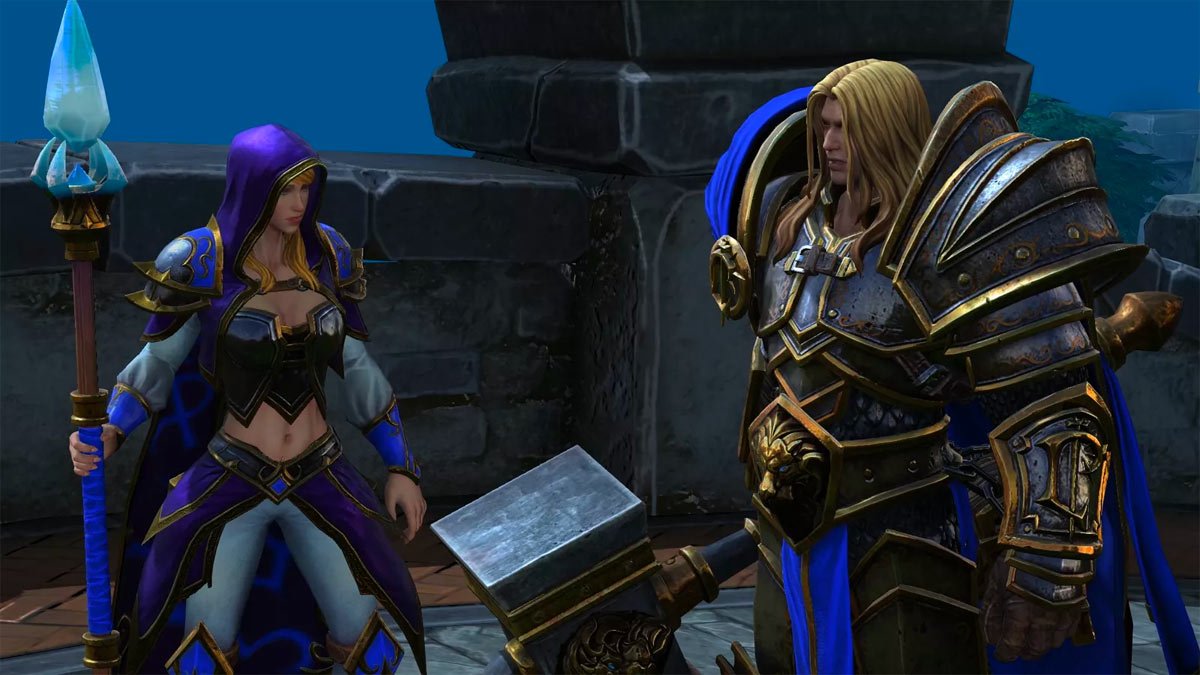 Arthas was always the Lich King!

Fans were stunned after yesterday’s announcement of Warcraft III: Reforged. Not only did Blizzard remember that Warcraft was once a strategy game, but they were going much farther in updating the classic than last year’s StarCraft: Remastered. This could almost be considered a remake of the quality of textures and cutscenes going on. That touch up is extending to a bit more than just aesthetics, though.

As reported by Polygon, Blizzard’s Brian Souza and Pete Stillwell elaborated on the changes coming to Reforged in a post-presentation interview. The biggest announcement is that Reforged will be compatible with the original release of Warcraft III. Even community developed maps and mods will work with the new remaster. You won’t need to buy the new version to play online, either, though doing so will obviously net you more modern visuals.

Stillwell explained the difference between this and StarCraft: Remastered. “When we went to Korea [for StarCraft: Remastered] and talked with pros and people still playing in game rooms, the overwhelming feedback was ‘Please don’t change the game.’…But with [Warcraft III: Reforged], we’ve talked with the communities in Europe and in China [who say], ‘Hey, we don’t think this game is done.'”

To that end, Blizzard will be introducing a wide range of balance tweaks and even expanding on the options available in the game’s editor. In a move that will likely be controversial, Blizzard is also working with writer Christie Golden (famous for her Warcraft novels) to tweak aspects of Warcraft III’s story to fall in line with established World of Warcraft lore.

This move is being done to give, “renewed focus to a few central characters that we thought deserved a little bit more time in the limelight,” as Stillwell puts it. Stillwell then mentions characters like Jaina and Sylvanas, whose roles in the original campaign were pretty thin. He even brought up the Murloc creatures, which were basically a reskinned enemy before becoming an entire race in World of Warcraft.

“A lot of stuff in Warcraft III was just kind of put in as ‘Hey, isn’t this awesome? This is cool,’ Stillwell recounted. “Like the Murlocs for instance. One of the artists back in the day, he came in over the weekend because he felt that there needed to be more creeps on the maps … so he just retextured what the ghoul was and he made a Murloc.”

Along with that, some of the landscapes in Warcraft III will feature more defined architecture to better capture what World of Warcraft has on offer. The biggest can be seen in the trailer for “The Culling” mission, which features a Stratholme more in line with the popular MMO than the original. Stillwell mentions, specifically, that Stratholme originally had Greek columns and a small river that didn’t make a whole lot of sense for the village.

Whether or not these changes are what you want is another matter. I’m not sure how I feel about rewriting entire bits of lore, seeing as how World of Warcraft was built off of Warcraft III and not the reverse. I guess it would be interesting to see that backstory become more fleshed out, but nothing in WoW directly contradicts the RTS classic. This just seems like a bit of meddling to better justify the “Reforged” moniker.

At the same time, the classic Warcraft III isn’t going anywhere. Reforged is based on that and while balance updates will make their way to the original, players will still be able to access that version in all its 2002 glory. You can already boot it up in HD thanks to a patch from earlier this year, so it isn’t like Blizzard is demanding you move over to the new version.

All in all, I’m not quite sure what to make of this. I’m still pretty excited since I love Warcraft III. Those tweaks might get out of hand, though, and that wouldn’t be good.

Warcraft 3: Reforged is more than just a remaster of Blizzard’s classic RTS [Polygon]