Probably the biggest and most unexpected news that came out of Blizzard’s Diablo III press event last week was the announcement that players will be able to buy and sell items in-game for real currency. In addition to having a standard, gold-based Auction House like World of Warcraft has, Diablo III will also feature a safe, Blizzard-sanctioned way for players to exchange items for cash.

For many players, auction houses are a game unto themselves, and I certainly spent my own fair share of time exclusively playing the auction house in Warcraft. If Blizzard can convince enough players to put up their own cash to participate, I think this has the potential to be extremely successful for both Blizzard and the players who choose to use it. 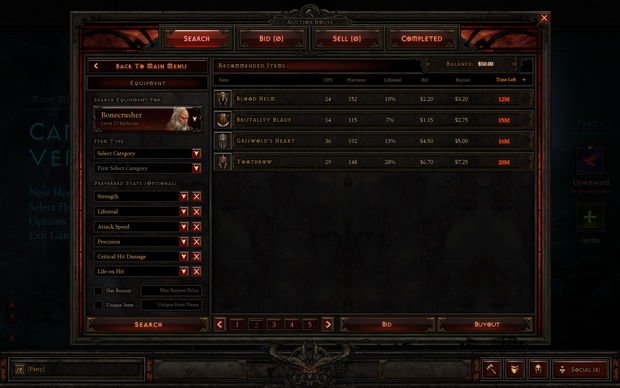 According to Executive Vice President of Game Design Rob Pardo, Blizzard is well aware that players will trade items and gold for real cash in virtually all of their games. From the shady loot-for-cash websites that plagued Diablo in the mid-90s to the Chinese gold farmers we see in WoW today, making money off videogames has been a simple reality for years.

Given that it’s going to happen anyway, Pardo and the Blizzard team figured they might as well create an official place for players to sell their items and gold without fear of being ripped off. To do that, they’re giving you this auction house.

For the most part, it operates similarly to the World of Warcraft auction house: the major difference being that real money is involved. Items can be listed directly from your stash, which is now shared between every character on your account. (In Diablo II, every character’s stash was only accessible by that character, and transferring items between your own characters was a massive pain in the ass.) Sellers can set a minimum starting bid and sell the item like a true auction, set a buyout price and skip the auction , or both. One other, smaller difference is that buyers and sellers will be completely anonymous; this makes sense to me, given the presence of real money. 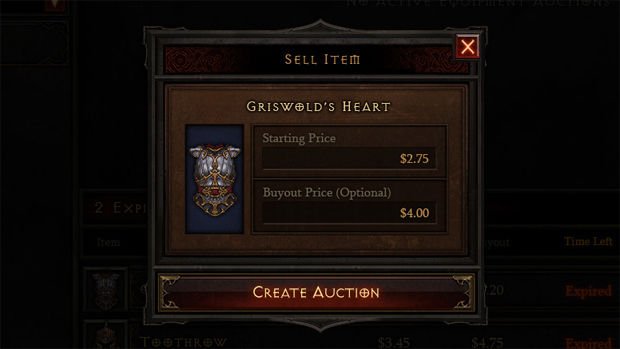 Once you successfully sell an item, you have a choice to make. The money you made from that sale can go to one of two places: it can be deposited into your Blizzard account, or it can be cashed out through a third-party service.

If you deposit it into your Blizzard account, only basic listing and sales fees apply. You get the full value of your item, and that money can be used for anything Blizzard-related: other auctions, your WoW subscription fee, and even merchandise from the Blizzard store.

Money deposited into a Blizzard account, however, cannot be later cashed out into real money — this would invoke a whole host of legal issues, with Blizzard essentially acting as a bank. If you choose to cash out through the third-party service, that company will take a small percentage of your cashout, but your money will be available to you as real cash, either added to your credit card or deposited into a PayPal or bank account.

To reduce the risk of people cornering the market or artificially driving up prices (like we see on WoW servers), there will only be one auction house for each currency — if your country is in the eurozone, your auction house is shared with all other euro-using countries. The typical WoW server only has around 5,000 players, making it easy for players there to fix prices and damage the economy. It will be much harder for that to occur in Diablo, simply because of the sheer volume of users.

It’s important to note what this auction house won’t be. It’s not a store — Blizzard is selling nothing directly. Everything on the auction house will be weapons, armor, and items that other players have actually found in-game and have put up for trade. Pardo said that, barring some serious unanticipated problem that would require them to get involved, Blizzard plans to be completely hands-off once the auction house is running. The economy will be entirely determined by the players, and Blizzard has no intention of stepping in to regulate it. Additionally, Blizzard has stated that “99.9%” of the items in the game won’t be soulbound — in essence, if it’s not part of a quest or a plot device, you can toss it up for sale.

Blizzard has also stated that Hardcore characters will not be able to use items purchased through the real-money auction house, as they think that would take away from a significant portion of the Hardcore experience. Softcore characters will have access to these items in PvP. 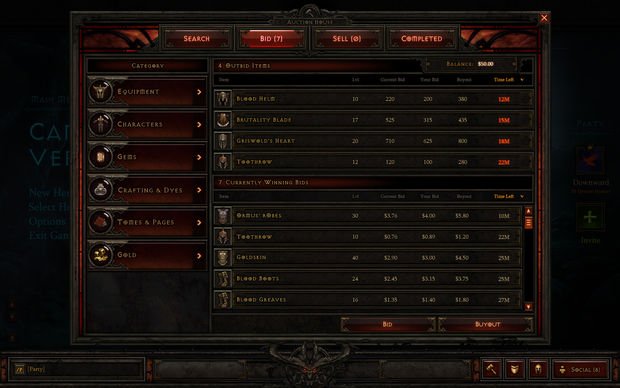 Blizzard has to make money off this somehow, though. When you want to list an item, you pay a ‘nominal’ (actual numbers were not given to us, as they’re still being decided on) listing fee, and when your item is sold you pay a small sales fee. As of now, the listing and sales fees are both a flat rate — they won’t scale if you sell a really valuable item.

The listing fee was decided to prevent people from dumping their entire inventory into the auction system — people should decide what’s crap and what isn’t, and only list items people are actually going to be interested in. Blizzard also wants to prevent people from setting wildly unrealistic buyout/bid prices, and having to put up a small amount of real cash to list an item will hopefully keep the economy reasonable. That said, to encourage people to participate and try out the auction house, accounts will likely be given a certain amount of free listings every week.

Overall, Blizzard says that this (real) cash auction house is simply them giving players what they want. It also makes a lot of sense financially, particularly for regions like Asia where players don’t purchase the game itself, but tend to play in PC cafes and LAN centers. If it doesn’t seem like your thing, the standard gold-based auction house will still be available for players who are unwilling or unable to put up real cash, and I suspect a fair amount of players will be using it. I’m personally hoping the cash-based auction house takes off though — I’d love to be able to make back the money I spent buying the game just by playing it.