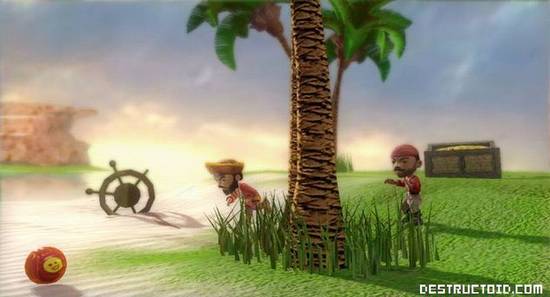 While my hopes were up that Blazing Lizard’s first title would include wood chipper and pirahna tank deaths, it’s hard to argue with this. The developer (made up of ex-Volition members) has revealed their downloadable title, Pirates vs. Ninjas Dodgeball, which (thank God) is exactly what it sounds like.

The game (the first in a series!) allows for up to eight players to choose from five unique teams (including pirates and ninjas, of course) and compete head-to-head in the sport that seperates the mice from the men — dodgeball. Unlike traditional dodgeball, teams aren’t restricted to one side of the court, and are allowed to freely roam the game’s six “arenas.” Characters also have combat moves and special abilities, none of which are wood chipper or pirahna related. Sigh.

Pirates vs. Ninjas Dodgeball is being developed using Blazing Lizard’s proprietary next-gen engine, Infyrno, and will support up four players local, eight players online, and four players in Co-op mode. The game will be available for download in early 2008 for yet to be announced home console systems.

“What more needs to be said when it comes to Pirates vs. Ninjas?” asked Blazing Lizard’s Studio Director, Chris Stockman. “This is the ultimate in rivalries, and we aim to have them settle it with all out, balls to the wall action.”