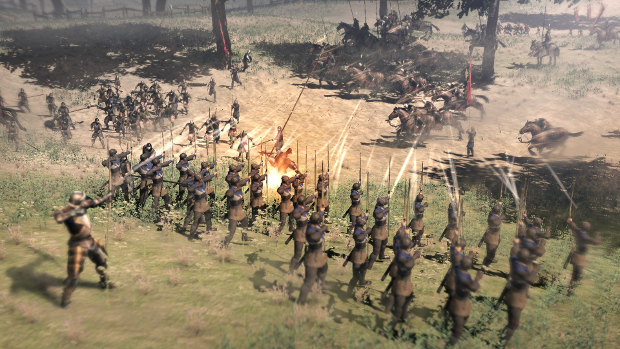 I’d never played Bladestorm, the historical action/strategy title that seems to be a bit of a cult classic within the Dynasty Warriors type. It’s still a bit odd that Koei Tecmo is reviving the 2007 PS3 and 360 game and that the HD update is also coming to the PS3 along with the PS4 and Xbox One.

The TGS showing was sparse. Only the PS4 and Xbox One versions were being demoed, but the two Xbox One stations seemed to have cheaper (not by too much) TVs than the two PS4 stations (also my Xbox One character froze towards the end of the level). It also failed to shed light on the revealed full name, Bladestorm: The Hundred Years’ War & Nightmare.

The “Nightmare” bit is meant to refer to a new separate section of the game that eschews faux historical dealings for a fantasy world of goblins and the like.

So there wasn’t much to go on, aside from the newly added ability to switch between one of the four squads you’re using. The bit of demo might have been overpowered, because I was just awkwardly maneuvering my swarm like a minivan on oil-slick ice, occasionally running rough shod, and then go back to hanging out.

Four fighters in hand (archers, horseback cavalry, warriors, and spear wielders) I played through a bit of what is still at least new to me. Those turned off when they hear “Dynasty Warriors,” the button presses become a bit more delicate and fragmented as main attacks with lengthy recharge are mapped to the face buttons.

Lots of times, you’re just directing your swarm of soldiers into another swarm of soldiers and they just kind of kill each other, like when you’d smash army men together.  Lots of cutting and pointed weaponry going on in these soldier clouds, but you could also turn it up another level by triggering the Bladestorm special move for a major steel dust up.

Still weird that Koei Tecmo’s bringing Bladestorm back with mysterious, tonally different new content. Those who aren’t totally puking in their Nikes at the idea of something in the Dynasty Warriors realm, but with less button mashing and more steering, might get something out of the sword sheep herding affair.