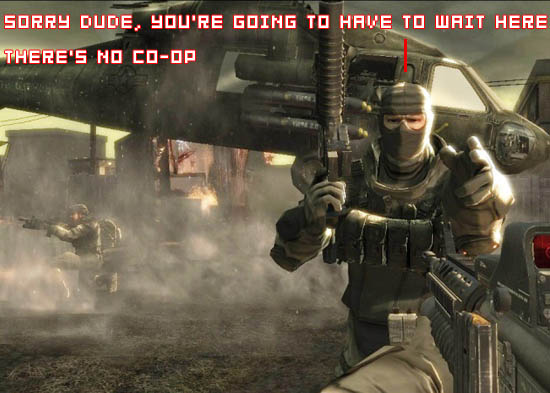 IGN has a hands-on writeup on the multiplayer aspect BlackSite: Area 51, and the overall tone is pretty positive, aside from a couple of new developments.

It’s good news that Xbox 360 owners will be able to play ranked and unranked matches, with full voice support, but PS3 owners won’t be as lucky. None of those features will make it into the PS3 version of the game.

It looks like co-op gameplay for both versions was chopped:

It’s also unfortunate that we must report that the online co-op that was promised for the game early on won’t make it into the final release. Whether or not it could be added in a downloaded pack remains to be seen, though we’re not holding our breath.

Even with all of that, this gun-game-turned-FPS looks like a winner. You’ll just want to be sure to grab the Xbox 360 version if you want to join in the multiplayer action.