Last year Patrick reviewed PC strategy role-playing game Blackguards, and he loved it. Blackguards 2 is out on Steam today. I have put about a dozen hours into the sequel, but I am not even close to the point where I can comfortably review it.

That said, I have played enough to get an impression for how it plays, and I have seen enough to say that players may want to be wary about making a purchase.

For strategy RPG fans, there is a lot to like with Blackguards 2. There is sufficient intrigue in the plot, tons of battles to fight, several different strategies to employ, and plenty of hex grids to traverse. There is a lot of game here, and overall it’s enjoyable.

One of the problems that Blackguards 2 presents stems from the fact that it is so deep. After the tutorial, the player is presented with a huge sum of adventure points to spend on customizing the protagonist Cassia with almost every skill available and no guidance on what makes the most sense. Later on it turns out that Cassia is one of the few units who can use magic, and I regretted putting so many points into her melee combat abilities.

A lot of maps have objects that can be interacted with, and those are marked clearly. However, the actual interaction is not always clear, leading to unfortunate trial-and-error gameplay. At one point I triggered falling rocks, assuming they would do something to a pursuer, but they had no effect. Another time I tried to drop a chandelier on some enemies, but the area of effect was not delineated, and I smashed myself. Restarting battles because the game is stingy with its information is common. 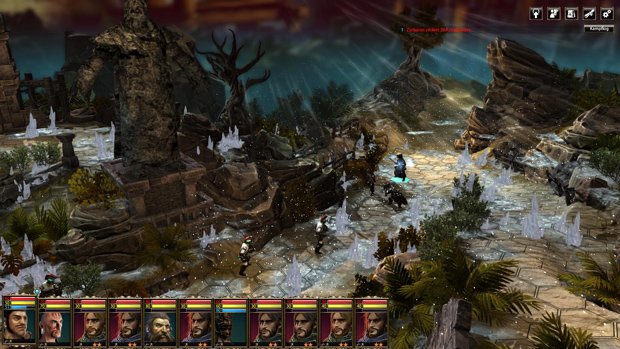 Worse yet are battles that must be restarted due to bugs. I hit several bugs early on, but none were as bad as one that would let me play an entire battle, get to the victory screen, and then lock up. Characters were still animated, but the screen wouldn’t fade to black as normal. I nearly quit after the third time it happened on a particularly long battle, but found a workaround where I exit to the main menu between each battle to prevent it. I have been playing the last nine or so hours in this manner, afraid that if I don’t exit and restart I will waste more of my time.

The other bugs are more easily forgiven, but still betray a lack of polish. Sometimes exiting from a shopping menu would exit the town entirely, forcing extra time spent on loading screens to re-enter. Sometimes spending skill points stops working before reloading the training screen. Sometimes the screen doesn’t track the battle action properly and the player is left to read the battle log to see what happened.

For these reasons, I am a little surprised that Blackguards 2 has fared as well as it has from early reviews. It’s possible that the technical issues I have experienced are isolated, but the design oversights are surely there. The underlying strategy gameplay is entertaining enough to merit purchase for some, but I wouldn’t call this a must-buy just yet. Stay tuned to Destructoid for the official review within the next couple weeks.