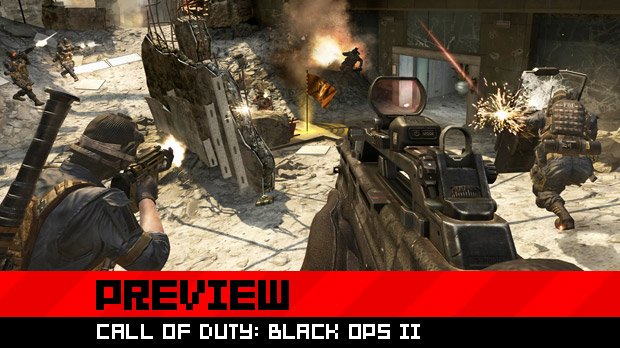 Call of Duty: Black Ops II broke retail records a mere 24 hours after the public debut of the single-player campaign. An impressive feat, considering that multiplayer, the franchise’s bread and butter, wasn’t even shown off until just a week ago.

It’s a good thing for fans that Treyarch isn’t a studio who would just settle for minor refinements, then. They very well could have, but instead, the team has rebuilt the multiplayer system so much that you would be forgiven for thinking they’re insane.

The Create-a-Class system as you’ve known it from past Call of Duty games — and pretty much all first-person shooters these days — is dead. Treyarch challenged the assumptions of what multiplayer in an FPS should be and has created something that makes the Call of Duty experience feel fresh again.

Pick a number between 1 and 10

The Create-a-Class system up to this point has followed a pretty simple formula. You’ve always had to pick at least one primary, secondary, attachment, lethal, and tactical, and multiple Perks and Streaks to craft your custom character. Well, forget this system completely, as you now have total freedom over what you want to bring in.

The new system is referred to as “Pick 10,” and it’s exactly what it sounds like. Players are now allocated ten points and have the choice of taking any ten pieces of content they want, each of which takes up an allocation point. For example, you don’t have to bring in a secondary gun and can instead use its allocation point on something like an extra attachment for your primary or an extra lethal grenade.

To further drive home what this means, players can literally jump into a game with nothing but a knife and just use all of their allocation points on beefing up their character with Perks. Of course, that’s an extreme example, and you’ll be relying on pure luck to find a gun on the ground quickly. Still, it’s something you could do if you’re crazy enough. 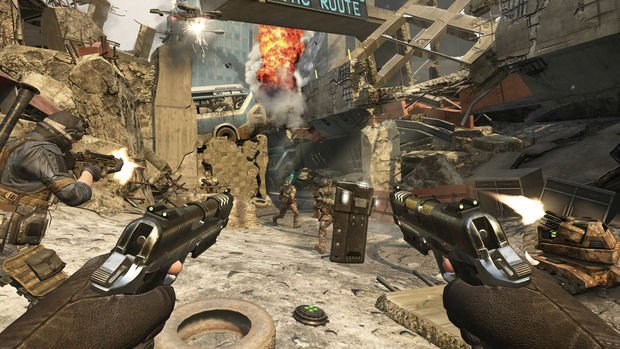 Perks are no longer “absolutes”

Perks have also been completely redefined. For starters, Perks only impact the player’s traits now, and don’t give any enhancements to the weapons — those have been relegated to the attachments. Pro Perks have been completely killed as well, so now the system is simply a matter of what you get from the start.

It’s crucial to note that what I saw was in alpha state, so some things can and likely will change before release. With that said, here are the Perks that were available during my hands-on time: 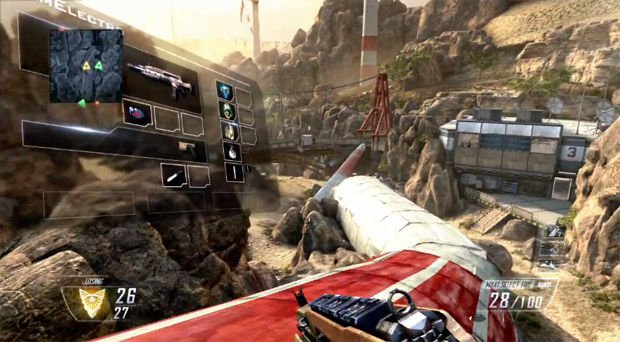 The Pick 10 system has all your traditional weapon slots for creating your class, but it also adds three new slots called Wild Cards. This feature lets you “break the rules” of the traditional system by allowing you to stack your character like crazy.

There were six Wild Cards that Treyarch showed off, with choices like being able to take a third attachment, an extra lethal, two primary weapons, an additional attachment to add to your secondary, or an extra Perk 1, Perk 2, or Perk 3. Each Wild Card will of course use up one of your allocation points, as will whatever extra ability you take from the Wild Card menu.

Welcome to the grid

Black Ops II simplifies the customization presentation by putting everything right in your face. Before, you’d have to move about multiple sub-menus, which made the process of customizing cumbersome. Now when you select something like the Assault weapons category, a visual carousel comes up that lets you scroll left or right so you can see all of your options.

Not feeling an Assault gun? Then simply press up or down to navigate to the shotguns, machine guns, pistols, rockets, and so forth. It’s now very easy and, more importantly, fast to jump to all of the different sections when you want to equip your character.

The system is also about keeping the door always open. Say you’ve used all ten of your allocation points but you try to pick something else anyway. Rather than graying out all of your options, the game simply shows you your currently equipped items so you can easily swap one out. 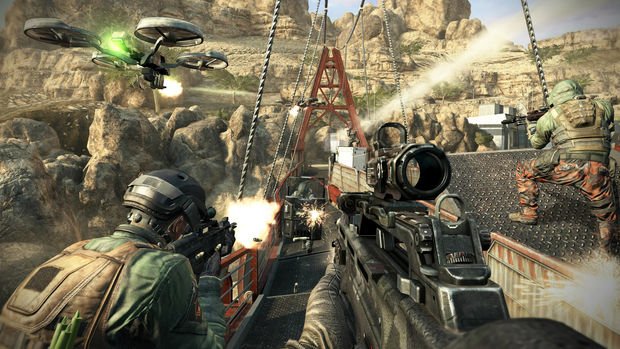 Black Ops II‘s multiplayer is set in the year 2025, which means you get FUTURE GUNS! Here’s a list of the weapons I saw, but note that it’s not the final list:

Again, this isn’t the final list. One developer told me that the crossbow will be back, much to my delight. Also, notice the lack of Riot Shield? It’s been replaced by the Assault Shield, which does the same job but can also be literally planted in the level to provide mobile cover on the fly. It can be picked back up, and it will die off with the player too.

Another new weapon mentioned in the Tactical list is the Shock Charge. It’s a stick that you throw to plant into the ground. Once an enemy steps within its proximity, the stick will immobilize the player with an electric shock. It’s non-lethal but can kill someone if their health is low enough.

There are a lot of fan favorite attachments returning to Black Ops II, but there are also a ton of new ones that take advantage of the 2025 setting. One of my favorites is the “Select Fire” Attachment, which makes the first couple of rounds from your gun fire at a faster rate over the rest of the clip when you hold the trigger down. Players who can feather their triggers will have a real advantage here.

On the more futuristic side, there’s the Millimeter Scanner, which is kind of like the evolution of the Heartbeat Scanner. As you look through the sights, a pulse wave is sent out that shows you the silhouette of stationary enemies who are hiding in smoke or are behind a wall. Another one, the Laser Sight, increases hip fire accuracy. Sound familiar? This used to the be the Steady Aim Perk from past games. 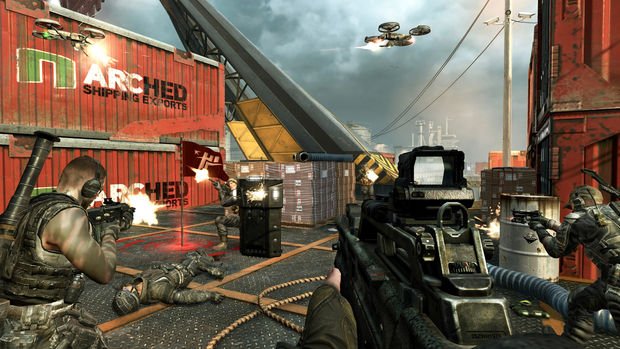 The old Killstreak system has been kicked to the curb in favor of the new and improved Score Streak. Everything you do nets a certain point value now, which goes towards filling up your Score Streak meter located on the bottom right of your HUD. Reaching a certain point threshold will then unlock one of your three Streak rewards.

David gave a great example where a player grabs a flag (100 points), kills a guy (200 points for a flag kill), and then scores the flag (150 points). With the 450 points accumulated, the player is able to unlock two of his low-level Streak rewards, one that cost 375 points and the other 400 points. That’s right, rewards aren’t mutually exclusive.

This system is able to better reward offensive and defensive players. One prime example of the defensive reward is with the UAV, as the player who calls it in now earns 25 points for every kill their teammates are able to get thanks to the spot assist. So much for just ignoring the UAVs, eh?

“Using score lets us reward desirable gameplay behavior,” David told us. “Tying the reward system directly into score is one of those assumptions we challenged pretty hardcore and said, ‘Wow, duh!’ There was a real obvious moment where we were like, ‘Of course, that makes perfect sense!’ We need granularity here, let’s use something better than strictly kills or the equivalent of one point.”

There’s going to be somewhere around 20 Score Streaks rewards, including returning rewards like K9s, Death Machine, and more. Some of the new ones include:

Early on, I found my perfect Score Streak setup: a combination of the UAV, Lighting Strike, and any of the higher-tier aerial vehicles. UAV and Lightning Strikes were both great ways to quickly stack up the points for whatever heavy reward I had in the line-up. Oh, and keep in mind that the Score Streak meter resets every time you die. 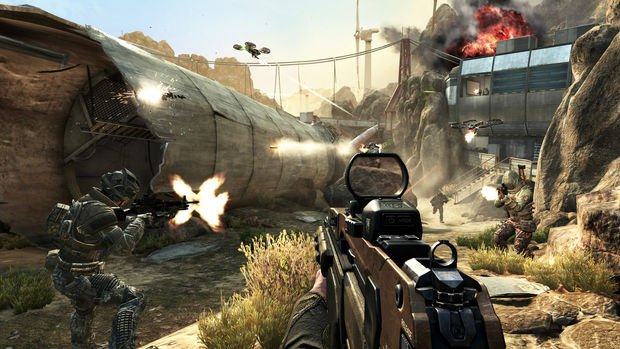 HOW DO YOU GET THE THINGS?!

Black Ops II does not have CoD Points. Instead, you earn an unlock token every time you level up, which can be used on weapons, Perks, equipment, Wild Cards, Score Streaks — everything, basically. However, while you get to chose what you want to unlock, not everything will be on the table right away.

Content will revealed to you in small bursts every time you accomplish a major rank change, such as going from Lieutenant to Captain. This way, players won’t be totally overwhelmed by all the options. Plus, this gives players something to look forward to through their multiplayer career.

“This is a lesson from Black Ops I,” David told us. “Something that CoD Points, in my opinion, suffered from. Whereas CoD Points were really awesome, I could just buy everything I wanted by level 33, and I’d start to tap out at that point cause I got what I want.”

So yes, this means content is gated by rank changes, of which there are 55 ranks in all. However, there are over 100 pieces of content, which means you won’t be able to unlock everything by the time you have to Prestige, of which there are 10 levels of. That said, Prestige-ing will also play a part in unlocking content, and Treyarch will be revealing more on that at a later date, promising that it “will all make sense.” 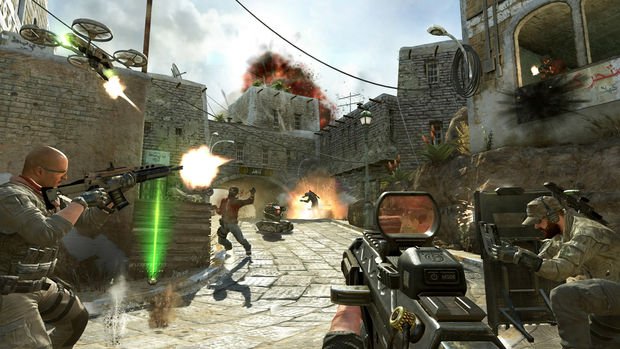 Treyarch showed off four maps: Aftermath, Turbine, Cargo, and Yemen. Aftermath was set in the ruins of downtown Los Angeles. Turbine felt a little like the Afghanistan map from Modern Warfare 2, though it offered more verticality. Yemen had an urban setting with a nice chokepoint in the middle, perfect for CTF games. Cargo was the most interesting, as the center of the map was always changing due to shipping crates getting placed/removed by a giant crane.

Two of the new modes we got to play were Multi-Team and Hardpoint. Hardpoint was a King of the Hill gametype with a constantly moving hot zone that the player needed to hold and dominate to score points. Multi-Team is the first time that more than two teams can fight each other on a map, up to six teams in all. Plus, Black Ops II supports a max of 18 players in a lobby now.

Additionally, challenges will be back with “a twist,” Wager Matches will be back in some form too, custom games will offer further customization features, and the emblem editor will provide new opportunities to offend everyone.

And that’s a taste of all the new things Black Ops II‘s multiplayer will be doing. To say I was stunned by all of these changes is putting it mildly. It’s without a doubt a game-changer, not just for the Call of Duty series, but for the first-person shooter genre in general. Now more than ever, you really have total control to create the playstyle that will best fit you.

I had a lot to say here, but believe it or not, that’s not all Treyarch had to show off to the press. In an industry first, they’re adding the ability to livestream your matches online on PC AND consoles, plus they’re even providing the tools for you to SHOUTcast matches right from the game itself. This is a huge addition for not only Black Ops II but for the industry as a whole, and you can learn all about it in our SHOUTcast preview .