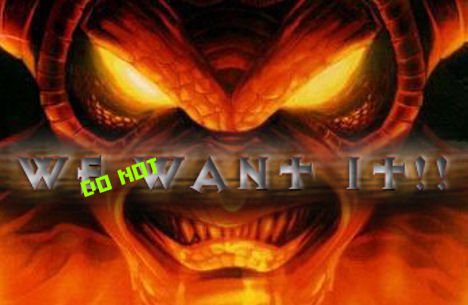 PetitionOnline has to be one of the worst inventions known to mankind, giving any prissy little bitch with too much time and not enough friends a chance to rally some overly dramatic call to arms about inconsequential rubbish. Enter Diablo III, and a bunch of “fans” who have found something to complain about despite getting a sequel to their favorite games.

According to some sad wankers, Diablo III is too bright. Yes, in this medium where people complain about there being too much gray and brown and darkness in games, there exists a subset of humanoid insects who think things aren’t dark enough.

Among their stupid complaints are; too many bold lines and clear shapes, blue and green lighting, exaggerated character models, outside scenarios with vivid colors, beautiful forests (yes, they complained that the scenery looks beautiful) and waterfalls that can create rainbows. All this and more is enough for over 2000 “people” to put their name down in protest. OH NO SON NOT THE CLEAR SHAPES! NO CLEAR SHAPES IN MY DIABLO! THIS IS NOT WHAT WE WANTED!

I suggest you read the whole petition, as it’s as funny as it is depressing. What I hate about these “fans” is that they claim to know the IP better than the people who created it do, having the audacity to say things like “that is NOT Diablo/Fallout/Banjo-Kazooie.” Sorry, but playing a game a lot isn’t some unquestionable qualification that allows you divine knowledge about what makes an IP. Your Diablo IS going to look more like Warcraft now, so you better get damn used to it.