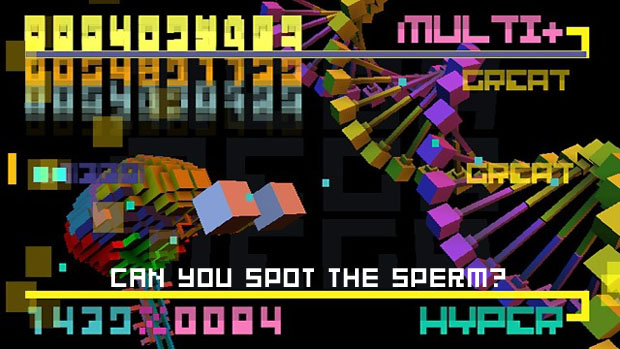 OK, it’s a little late, but here’s a sneak preview of last week’s Bit Transmission with Alex Neuse from Gaijin Games. Alex was willing to divulge a lot of crazy stuff on the show, but my favorite bit was when he confirmed that my theory about the meaning of the Bit.Trip games was at least somewhat accurate. I’ve long thought that the Bit.Trip series depicts the formation of a human life, including the part with the sperm and the egg. Though Alex wouldn’t tell me exactly when it happens, he did confirm that at one point or another, when you’re looking at the Bit.Trip games, you’re looking at sperm.

Looks like the Bit.Trip series and that weird in-vagina XBLA game may be the start of a new genre; the sex-education-in-utero-action-thriller.

Other highlights from the show include confirmation that “Nether” and other aspects of previous Bit.Trip titles that are absent from Bit.Trip Runner will appear in future Bit.Trip games, a progress report on Bit.Trip 5, the current status of Anthony’s lawsuit (and Gaijin’s counter suit) over the Runner trademark, a tentative release date for the Tron-like Lilt Line, and more.

Finally, if you have Wario Ware D.I.Y. Showcase, and you haven’t traded codes with the guys at Gaijin, you’re missing out. They’re giving out microgames that you can’t get anywhere else. Sign up for free games here, and if you’ve got the guts, and check out the full podcast here.