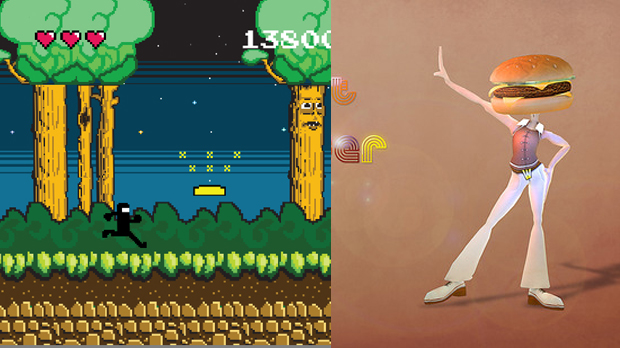 When I first heard about the Bit.Trip Presents: Runner 2’s exclusive playable character Whetfart Cheeseburger at PAX East 2012, I would haver never guessed he’d look like this. With a name like Whetfart, I expected him to look wet and smelly. Based on this first impression, I’m guessing that Whetfart smells great, but only time will tell.

Like I’ve mentioned before, Runner 2 appears to be the Super Mario World to Bit.Trip RUNNER‘s Super Mario Bros. It looks like that notion will carry over into the game’s retro stages as well, which have jumped forward in time from an Atari 2600 Pitfall-inspired look to a style that could have been a good fit on the Turbografx 16. The future is now!

I’ve also heard some awesome new music for the game that I can’t say too much about. I will say that it sounds like Matt Harwood has been given the opportunity to branch out a lot more this time around. Just as the game is moving beyond the “8-bit” visual style into something that more fully expresses the potato chip loving personalities of the guys at Gaijin, the soundtrack also feels more personal, all while retaining the signature Bit.Trip style.

There is also the chance that the Wii U version will get some awesome exclusive content. Can’t talk about either, but rest assured, it all sounds awesome.