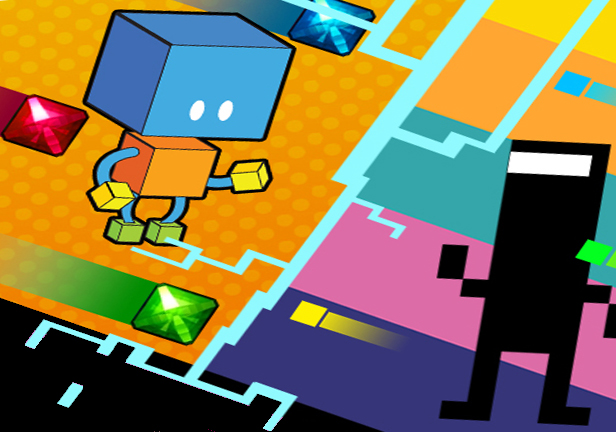 OK, so right off the bat, I should tell you that I’ve never played Zyrx, but if the Gaijin games team hangs out with the guy who made it, then it’s probably good.

Not only do the developers of Bit.Trip VOID hang out with him, they even plan to make a game with him. Scratch that, they plan to make a game with him over the course of 24 hours during this year’s Blip Festival in New York City. As anyone with any experience in making games (or anyone with any common sense at all) will tell you, this is an insane idea. This could be hell for all involved. It could lead to a game of pure, legendary crap. It could also result in the creation of something really special.

Some of the most surprising, original comics I’ve read in the past few years came out of 24 Hour Comics Day, so seeing the practice taken up by game developers gets me hyped. Take out the profit motive and months of time to over-think from the game development process? It could be a recipe for greatness.

Or again, it could lead to crap. I guess we’ll find out in a few weeks.

Hit the jump for the full press release regarding this project, currently code named “The Battle of the Brands.”

As we all know, Blip Festival 2009 is almost upon us, and I thought I’d take this opportunity to let everyone in on a little secret…

The handsome frontman from Robotube Games is going to be collaborating with the Gaijin crew on a little experimental Blip Festival inspired video game project.  Here are the rules:

1. Try to make a game in one day while at Blip Festival 2009 all the way over in New York City

2. Drink lots of coffee
3. Release the end product to the public, even if we fail miserably

They are the only rules.

You will live the results.

And for marketing purposes, we’re calling this fantastic event the BATTLE OF THE BRANDS!  Even though we’re collaborating, not battling!  And even though we may not even use our existing “brands”.  It just sounds so cool.  And you know what?  We can do whatever we want!  It’s our freakin’ deal, so shut up if you feel like it!

We’ll each be updating our sites, blogs, twitters, facebookz, etc.  In the spirit of being indie, we’re flying this plane by the seat of our pants!

Blip Festival is entering its fourth year of celebrating the best and brightest from the realm of chipmusic and its related disciplines.  The festival showcases the use of the former heavyweights of computing such as the Commodore 64 and Amiga, the Atari ST and 2600, and the Nintendo Entertainment System and Game Boy to create arresting music and visual art.