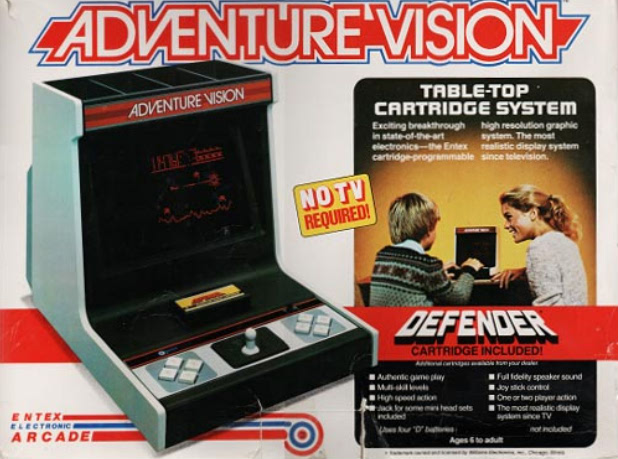 If you ask most people to name a retro console that features bright red LEDs and monochromy and causes migraines and epileptic seizures, they’ll start shaking in horror. “V-V-Virtual Boy…” they’ll stammer, barely daring to say the words. Robotube Games founder and Sacred Heart University professor Jason Cirillo, however, isn’t most people: if you ask him that question, he’ll spit in your eyes and bellow “The Entex Adventure Vision, motherf*cker!”

Actually, he wouldn’t because he’s a nice guy. What he would do, however, is point you to Bit Museum, episode 4: The Smoke and Mirrors of Entex Adventure Vision (embedded after the break).

Anyway, believe it or not, Nintendo weren’t the first to have the horrible idea of using only red LEDs on a barely-portable console — Entex did it first in 1982, with their Adventure Vision. If you’ve never heard of it (I hadn’t, until today), that’s because only about 50,000 of them were sold, and only about 100 of those still exist today.

It’s definitely a weird little machine: there were only four games developed for it (three of which were ports of Konami arcade games), and its guts had moving parts. I’m not sure on the specifics, but it had a tiny motor that spun a two-sided mirror around really fast, thus allowing you to play wobbly Asteroids clones and Defender.

Robotube currently develop games for the iPhone and iPod touch (although it seems like Jason’s trying to get GaijinGames to port some of them over to the DSi), and their Bit Museum series recently won an award in the Documentary & News category at the NAPTE NexTV awards. This means that they’ll be able to pitch their show to TruTV. Congrats, guys!

I was getting worried, since it had been a while since I’d heard from Jason, but I’m glad to see he’s doing well and still making hilariously informative videos. Here are some older ones about Nintendo, the Magnavox Odyssey, and the Vectrex.