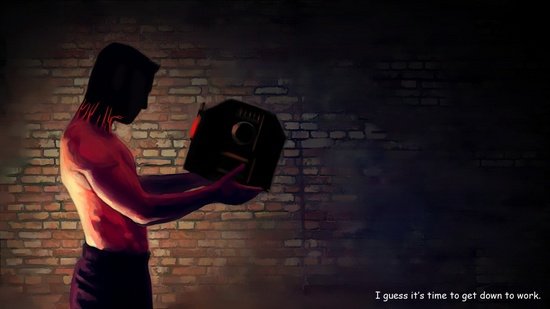 [Editor’s note: This is the final promotion for the Birthday-versary of awesomeness. Thanks again to everyone that made something for today, you all are amazing. — CTZ]

Hello Destructoid, and Happy second Anniversary. I wasn’t originally intending to do this comic for any apparent reason. I had briefly mentioned this plan in a C-Blog post, which many missed because it was only up for a few hours. Hamza contacted me after seeing it and informed me of an epic community thing he was epically orchestrating. The conversation went something like this:

Hamza: Hey, you think you can get it done by March 16th?
Ceark: Sure.

And thus this labor of love, blood, and sweat began. 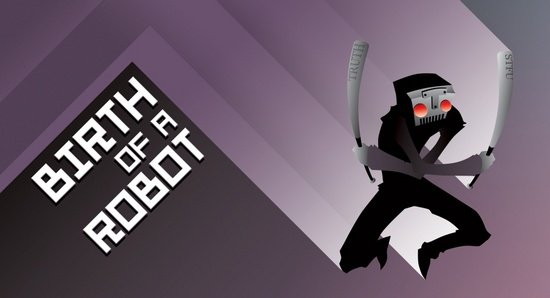 From the beginning, I was planning on having other Destructoid artists contribute to this. I wanted GuitarAtomik to do an awesome cover page for me, which he provided above (and I must say, he never fails at awesome). I’ll get into the other artist contributions at the end.

The antagonistic character in the novel is purely fiction. Any similarities to persons, living or dead, is purely coincidental.

It’s a crazy world and people will sue over anything. Sorry, but a disclaimer is a necessity. And it’s kind of funny anyway, because you see it at the beginning of a lot of videogames anyhow. Since we’re on disclaimers, please note that I didn’t take the time to color check anything, at all. That’s a mathematical process that I just didn’t have time to do. So, the colors are going to probably be off from page to page. Sorry. 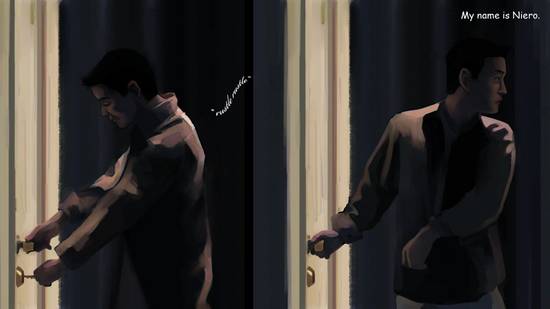 This project took me around 250 hours over the last month and a half, and for the speed I work at, it’s not nearly enough time for me as I am slow. During the duration of this project, nearly all my free time was devoted to this. When I wasn’t at work or sleeping, I was probably working on this. Although it’s far from my best work, I am proud that I was able to get this done. 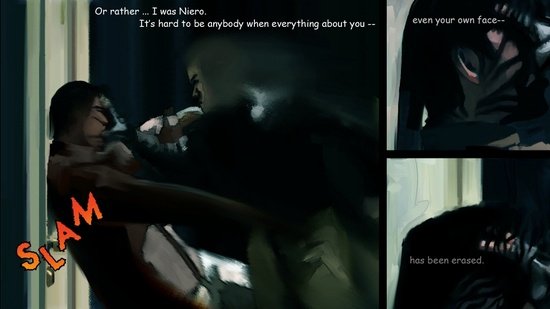 So what has Destructoid done for me to make me willingly, gladly go through this amount of effort? I’ll elaborate with a little (long) story. 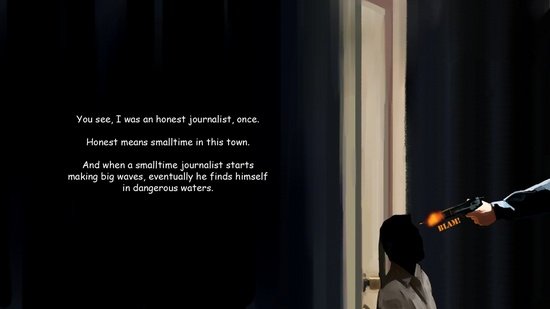 I grew up on gaming like everyone else here. Unlike a lot of the gamers-growing-up stories I’ve heard though, I never had problems making friends, talking to girls (or guys for some of you), or being picked on. I more or less got along fine with everyone. 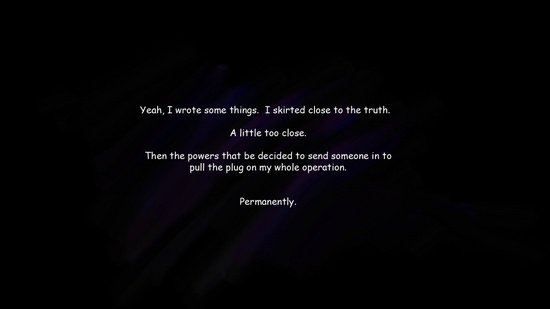 But, I wasn’t one of the art kids until high school. Before that, I was a just a gamer kid. Perhaps, one of the only gamer kids. There were plenty of kids that played and liked videogames, but no other kid that was really INTO videogames. Thus, I had no one to really share and discuss my passion with, because no one played all the games I did. No one else had, as Chad calls them, the “memory card” quality moments that I had. 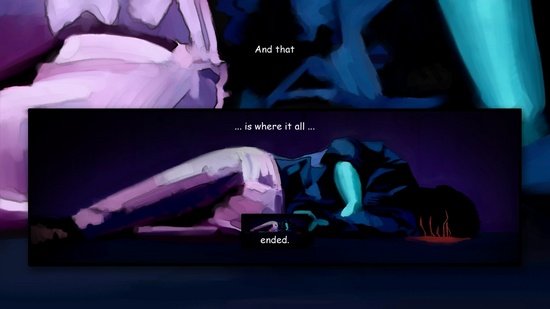 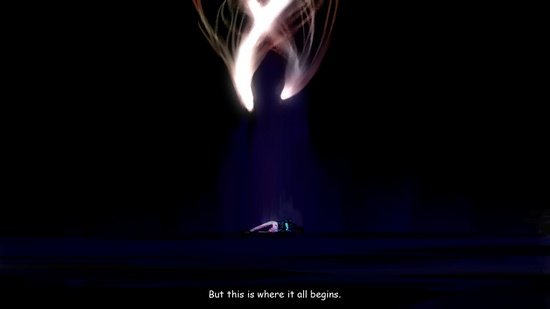 So high school was when I started drawing. I really sucked then, far more than the other art kids. I had an uber late start after all, and I have a color deficiency. But I was devoted, and I was lucky to have very supportive parents. 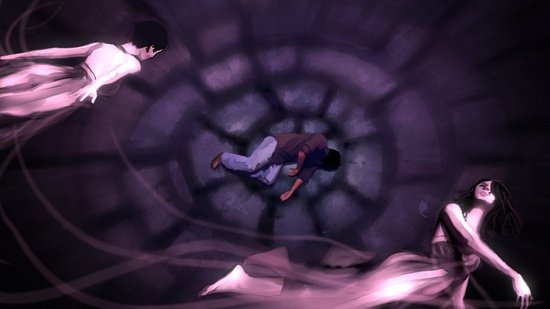 With hard work and plenty of support, I eventually got good enough to get a BFA and a job in film. Of course, the journey of artistic improvement never really ends. I’ll still be refining my abilities to the point where I’m dead I’m sure. 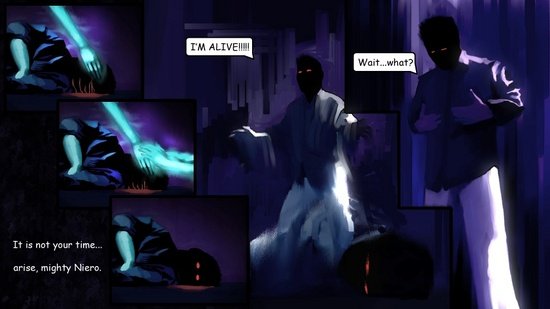 But back to my main point. I’ve never had the feeling of being part of a gaming community. I’ve always had really great friends. They are in fact epic in their greatness. However, I have had very few close gamer friends throughout my life. I can count them on one hand. I discovered Destructoid during college, and due to time constraints, reserved my participation to lurking from Juneish 06 until sometime around last Novemberish. When I finally had personal time again, I decided I wanted to be a part of a community, where I can openly share my love with games with literally an army of gamers as avid as me, and in most cases more so. This is when I started participating in Destructoid. 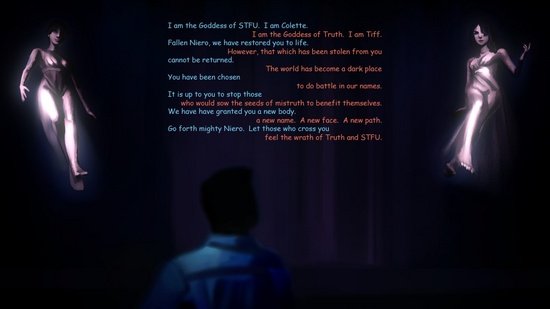 Of course, getting accepted and known into a community of any sort is rarely automatic. You have to give to receive. This is how a community sustains itself, this is how a community almost becomes familial. This is the kind of community that Destructoid uniquely is. Now I’m not the kind of person that half asses things. I make decisions, often on the whim, and I commit to them, and I do everything I can to see it through. It’s probably the Aries blood in me. So I didn’t really dick around too much. You guys quickly showed me what is fail and what is not. I did what I could to show that I wanted in, in most Captain Obvious way that I could — with my art. I also did what I could manage to improve the community quality of Destructoid. That’s why I started the C-Blog recaps, and will continue doing them until Niero works his magic and makes that sorta stuff automated. 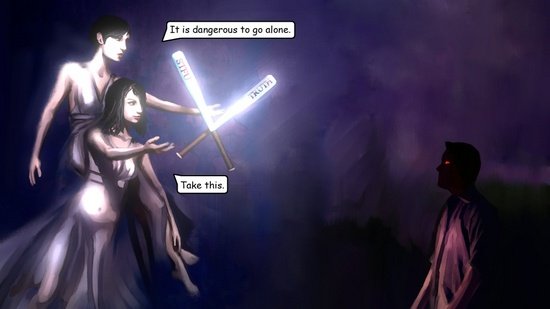 By this point, I definitely feel like I’m a real part of the Destructroid Army now, not a number on the registered users list. We all already know how badass Destructoid is so I won’t go into that. Let’s just say I’ve made countless new friends, partied with awesome people, got free shit from Ron Workman, and have plenty of people to play and discuss games with, and that’s awesomesauce. Destructoid is now part of my daily routine (Captain-Obvious on that statement too). 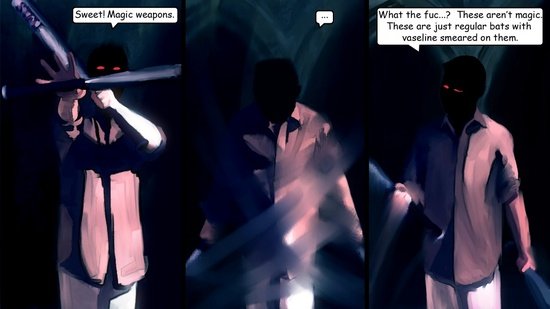 OK, so enough of that story. On to the comic book. So as I mentioned before, this took roughly 250 hours. I even turned down one of the occasional freelance offers I get to do get this done. Also as I mentioned before, this is a bit rushed; there just wasn’t enough time to make this perfect. In fact, there are only two pages that turned out as originally planned and those two are the only pages that I’m really happy with. 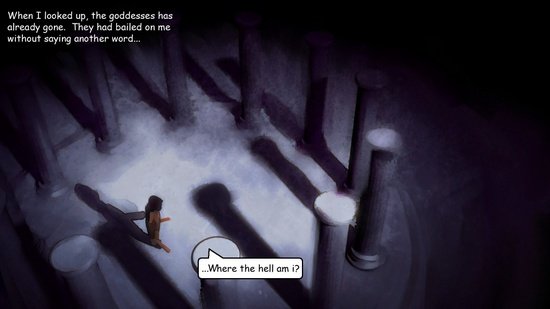 Thus, there are a ton of obvious artistic errors in problems and CBB’s, but I’m not going to dwell on it. I got it done (somehow). 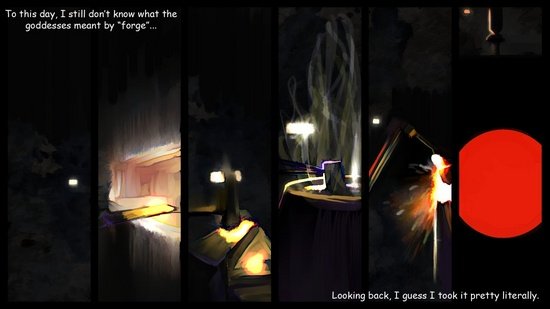 I will say kudos to anyone who can figure out what order I did these pages in. This entire comic was painted completely out of order. Hints: The first page is one of the pages I’m most happy with, the 10th page is the second page I’m most happy with. The crappier the page looks, the more likely it’s one of the last pages, you can easily tell by the types of brushwork I’m using.

This is one of the pages I’m happy with. I spent a lot of time on this page because I felt the need to do justice to the rumors I’ve heard about Niero. What rumors you say? Let me share a few:

-Niero is super muscular. He’s built like the brick shithouse of a rugby team.
-Getting teabagged by Niero is the equivalent of having 2 wrecking balls dropped on your face. But he’s a nice guy so he wouldn’t do that.
-Niero is not legally allowed to breathe in public. The force of his lungs is considered a WMD. He only breathes once a day into a specially built titanium tank that has to be unpressurized first.
-Niero must be very careful with his movements. Any over flexing will cause the clothing of himself and those around him to disintegrate. Fatal injuries may also occur to those around him.
-Niero wears special shoes that displace his muscle weight. Otherwise, he would destroy the ground.
-Niero can bench press more then you. With his cock. 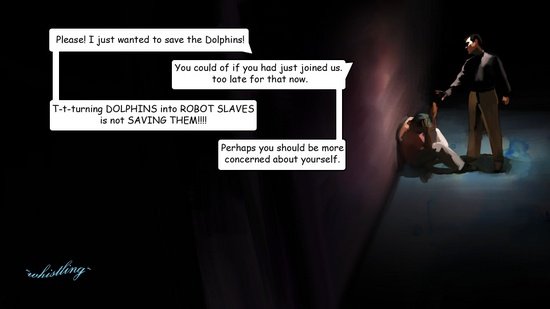 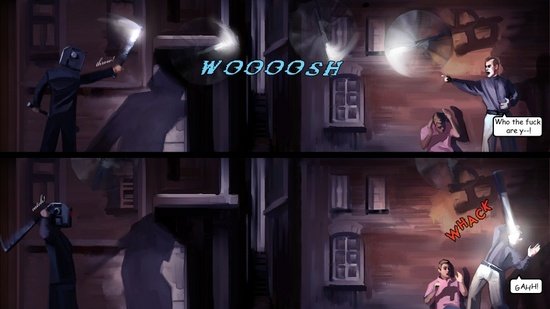 In fact, as I continued through the list of editors, I soon realized that the only that could fit this role is Chad. He’s just so friendly. That’s why anyone would let him put a baby in ya. 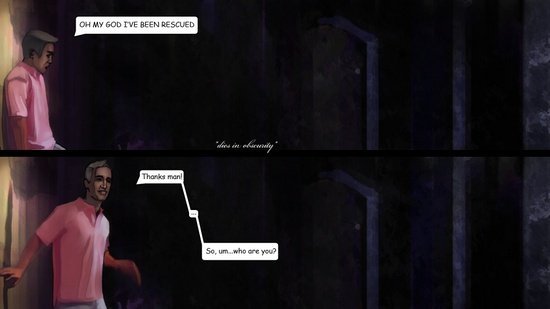 Thus, Chad, and the dolphins of the world, are saved. 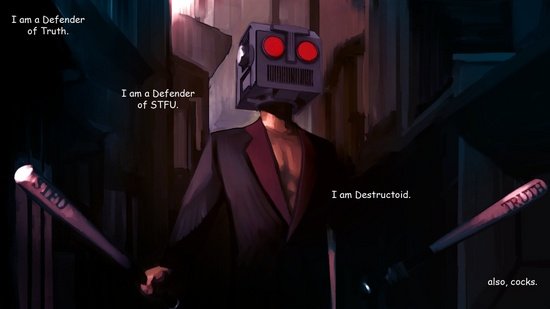 This is perhaps my favorite page. You may be wondering why I’m always painting Niero in a dark suit rather then white, and a dark metal helmet rather than green (or silver like the real one). For the dark suit, that’s purely compositional, a white suit would simply “pop” too much. Also, because I paint imprimitura and paint cool and warm or vice versa, a white suit in my style would probably look more blue or orange. On the green helmet…well let’s just say I very very rarely use the color green, for anything (at least not consciously). 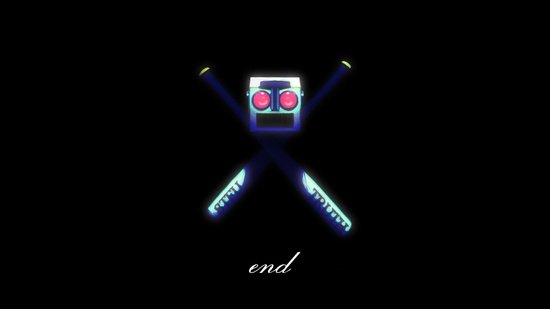 So that’s the end of my short comic (I used a little green here though!). I originally intended to do a full spread of the entire editorial staff, but didn’t have time for it. That may still be coming, as there is one more thing to this comic that I will explain in a moment. First though, I need to thank and acknowledge a few folks:

– Hamza, who orchestrated this whole thing and checked over this post.
– Colette and Charlie Suh, who provided me with reference photos.
– Jim, who rewrote my entire dialog so that it wasn’t utter shit, because I suck at writing.
– GuitarAtomik, for the cover illustration.
– RioMcCarthy, and Deiga, for contributing to the guest gallery (on time!)
– And Finally to Niero.  You have built the most badass community, ever, 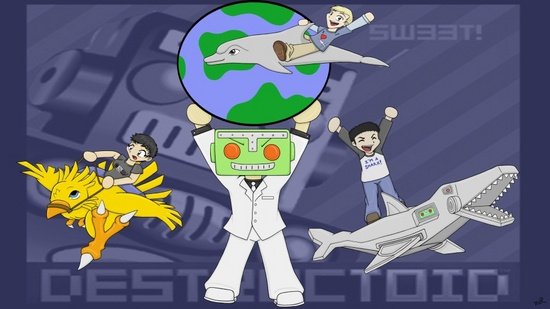 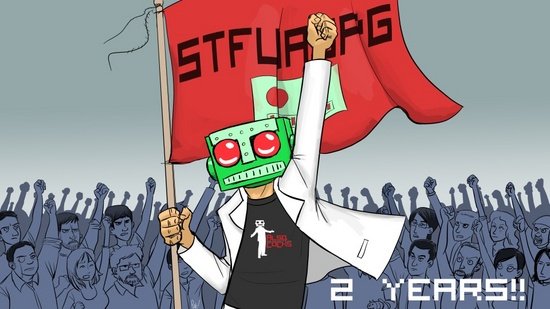 Now you may be thinking “That’s awesome, but why the guest artist gallery?” Well, I just mentioned that there is one more element to this comic book.

The thing about artists is that you can’t learn everything, you learn as much as you can but in the end, you’ve have to focus on a few specialties. In my artistic career, I’ve specialized my training in the following things: traditional painting, digital painting, fashion design and construction, 3D animation, and one more thing that few people know: book making.
That’s right, I’m pretty skilled in the art of making completely handmade, unique one of a kind books from scratch. So for the final part of this project, which will be done probably mid April, I am making a hand bound, one of a kind book to send to Destructoid. One day when Destructoid has an actual office, they can probably stick it in a display case or something.

Now, a big thanks to the artists that were able to make time to contribute. A few had mentioned that they didn’t have time to do something before today so let me just say, you guys are awesome nonetheless, but since I won’t be making the actual book till next month, feel free to work on something if you still want to put something in the book.

And to the rest of the community that would like to contribute, please feel free to do so. Please note that this is serious business, so put some real effort into it, otherwise I don’t think it will be right to put it in. If you’re interested, contact with me with your ideas and I’ll give you the guidelines.