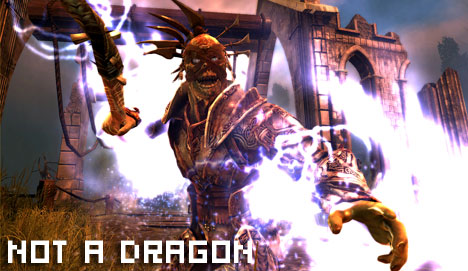 The first will be this Gen Con Indy, which our own Brad Nicholson terrorizing reporting from later this week. The Penny Arcade Expo will also have the BioWare team showing off the game’s combat, gameplay, and story features; a stage demo is planned as well, and will reveal a “major feature” of Dragon Age: Orgins. Our guess is that it involves — wait for it — dragons. We hope.

Europeans look to be getting the shaft this year: BioWare will be showing the game to the press only behind closed doors. Hey, there’s still time to grab a ticket to the States, right?

TO THE WORLD’S MARQUEE GAME CONVENTIONS

Coming from behind closed doors and onto the show floor, BioWare is thrilled to reveal the heart-pounding demo that wowed international media at E3 2008 to the eager fans at Gen Con Indy, August 14-17, 2008, at the Indianapolis Convention Center in Indianapolis, Indiana.  This marks the very first public appearance of Dragon Age: Origins ever, with fans able to get a first-hand look at some of the exciting combat, devastating magic and credible digital actors that make up this epic adventure.

Dragon Age: Origins will then cross the ocean to Leipzig, Germany, to reveal itself to eagerly awaiting European fans at the GC Developers Conference, held August 20-22, 2008, at the Leipzig Exhibition Center.  Dragon Age: Origins project director and executive producer Dan Tudge will be conducting behind closed doors demos to the press, revealing new details about combat, exploration, dialogue, the game’s origin stories and a few other juicy surprises not to be missed!  BioWare’s community team will also be there to demo Dragon Age: Origins in a special lounge for invited members, fans and leaders of international EA community sites, August 22-24.

Fans attending the Penny Arcade Expo in Seattle, Washington, August 29-31, 2008, will get a close look at Dragon Age: Origins as the BioWare team shows off some of the exciting combat, gameplay and origin story features.  Another special stage demo is also planned for PAX, providing the world’s first look at a major feature of Dragon Age: Origins.