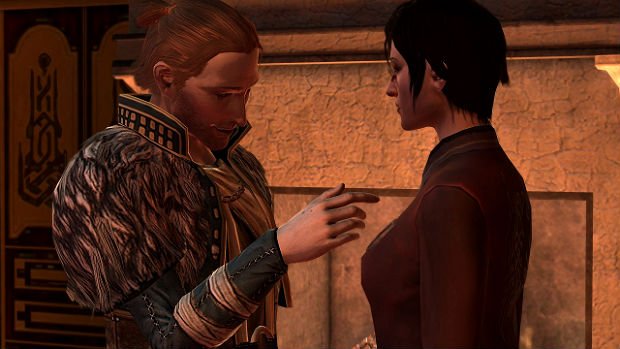 When I interviewed David Gaider for a series of Dragon Age II-related previews, he seemed a charming, soft spoken, and intelligent writer with a passion for role-playing games. Imagine my surprise, then, to see the bespectacled scribe destroy a proposed “No Homo” mode.

On the BioWare forums, Dragon Age fan Baltas accused the developers of short-changing the “Straight Male Gamer” by including four gender-neutral love options in the game. To clarify: each of Dragon Age II‘s romance options are omnivorous, flirting with both male and female Hawkes, something Baltas finds “awkward.” He feels that the romance options in the game were primarily designed with gay and lesbian fans in mind and that “straight male gamers [were] a secondary concern.”

(It’s worth noting, though, that Sebastian Vael, the extra companion included in the “Exiled Prince” DLC is heterosexual.)

Baltas concedes that male Hawkes could have heterosexual encounters with both Isabella and Merrill, but complains that they “are what one would call “exotic” choices. They appeal to a subset of male gamers and while it is true you can’t make a romance option everyone will love, with Isabella and Merrill it seems like they weren’t even going for an option most males will like.”

Ignoring the fact that Isabella is hardly “exotic” — I’m pretty sure that white women with tans and huge breasts are pretty much de rigeur — Baltas’ real triumph is his lamenting the lack of a “No Homosexuality” option, which, apparently, “could have been easily implemented.”

“The romances in the game are not for ‘the straight male gamer’. They’re for everyone. We have a lot of fans, many of whom are neither straight nor male, and they deserve no less attention. We have good numbers, after all, on the number of people who actually used similar sorts of content in DA:O … and that’s ignoring the idea that they don’t have just as much right to play the kind of game they wish as anyone else. The “rights” of anyone with regards to a game are murky at best, but anyone who takes that stance must apply it equally to both the minority as well as the majority. The majority has no inherent “right” to get more options than anyone else.

“And if there is any doubt why such an opinion might be met with hostility, it has to do with privilege. You can write it off as “political correctness” if you wish, but the truth is that privilege always lies with the majority. They’re so used to being catered to that they see the lack of catering as an imbalance. They don’t see anything wrong with having things set up to suit them, what’s everyone’s fuss all about? That’s the way it should be, any everyone else should be used to not getting what they want.“

And Gaider’s coup de grace: “And the person who says that the only way to please them is to restrict options for others is, if you ask me, the one who deserves it least. And that’s my opinion, expressed as politely as possible.”

“The truth is that making a romance available for both genders is far less costly than creating an entirely new one. Does it create some issues of implementation? Sure — but anything you try on this front is going to have its issues, and inevitably you’ll always leave someone out in the cold. In this case, are all straight males left out in the cold? Not at all. There are romances available for them just the same as anyone else. Not all straight males require that their content be exclusive…”

And finally, Gaider addresses — albeit tangentially — something that bothered me about Anders: he comes on way too strong at the beginning of the game.

“Would I do it again? I don’t know. I doubt I would have Anders make the first move again — at the time, I thought that requiring all romances to have Hawke initiate everything was the unrealistic part. Even if someone decides that this makes everyone “unrealistically” bisexual, however, or they can’t handle the idea that the character might be bisexual if they were another PC … I don’t see that as a big concern, to be honest.

Romances are never one-size-fits-all, and even for those who don’t mind the sexuality issue there’s no guarantee they’ll find a character they even want to romance. That’s why romances are optional content. It’s such a personal issue that we’ll never be able to please everyone. The very best we can do is give everyone a little bit of choice, and that’s what we tried here.”

While I appreciate Gaider coming down to mix it up with the riff-raff — and gay-baiting on a videogame forum certainly constitutes riff-raff — can we stop and talk about the kind of sexual parallel universe Hawke lives in? If you roll a male Hawke, Anders is gay; if you’re a female Hawke, he’s straight.