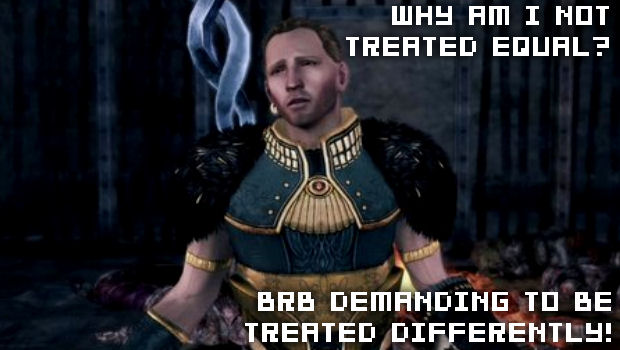 BioWare writer David Gaider has upset people for daring to portray a gay character as anything but a flawless beacon of brilliance in Dragon Age 2. A petition for his firing has started up online, inspiring a counter-petition in support of him.

Despite recently standing up against a homophobic Dragon Age fan, Gaider stands accused of negatively portraying gay people by having them lose friendship points if your character spurns their advances. Apparently, portraying somebody as being upset over rejection reinforces the stereotype that “gays are unable to be normal people and think [about nothing but] sex.”

It is possible the anti-Gaider petition was started by a troll trying to fire up trouble. If that’s the case, it’s certainly been successful, as members of the gay gaming community has been talking about it heavily.

I’m with Ken for sure. I think certain individuals within certain demographics want their fictional representatives to be 100% meritorious, possibly to salve their own insecurities and gain some sense of justification. Anything that deviates from this total pandering is blasted as bigotry, when it’s not that way at all. Just because you have ONE gay character who might be, say, a bad guy in a game, that doesn’t mean you’re saying all gay people are. Just that one, fictional, gay person.

Amazes me how some people demand equal treatment while expecting special acquiescence.