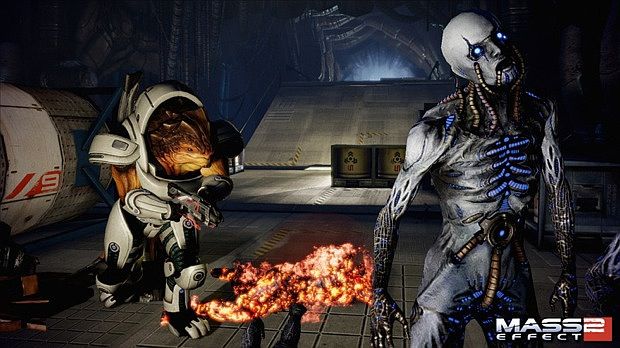 Rumors of Mass Effect 2 on PS3 continue to persist. This time the rumor fires are being fanned by a lone comment, a possible slip of the tongue, made by BioWare’s Jay Watamaniuk during a presentation at Poznan Game Arena.

According to Polish gaming Web site Polygamia, Watamaniuk presented two games during the event, one of those being Mass Effect 2. In that section of his presentation, Watamaniuk said the sci-fi RPG was set to hit three platforms: the Xbox 360, PC, “and probably PS3.” Polygamia writes that the man realized his mistake and shortly began backpedaling, saying that the studio doesn’t comment on rumors and speculation. In other words, they don’t comment on stories like this.

Just last week, EA shot down Mass Effect 2 PS3 listings on an official Russian EA Web site, saying that they were made in “error.” Retailers outside of North America, on the other hand, have been listing the title as PS3-bound despite no outward indications from EA that the title is hitting the Sony’s black platform.

In North American, currently through Amazon, pre-orderers of the PS3-bound Collector’s Edition of BioWare’s other upcoming RPG, Dragon Age: Origins, can net themselves a cloth map, a tin box, and “an unlockable item for Mass Effect 2.” We’re still unsure if this is an accidental listing ripped from the contents description of the Xbox 360 version of the special edition package. In fact, we’re unsure of a lot of things relating to this ME2-to-PS3 business — all we have are a series of little and quite possible mistakes.

[Update: Consider this latest Mass Effect 2-on-the-PS3 thing, and any subsequent stories on the subject toast. In a recent official message board post, Watamaniuk made it very clear that ME2 is only coming to two consoles: the PC and the Xbox 360. “There is a report circulating today based on an appearance I made in Poland yesterday,” he said in the post. “Seems there was a misunderstanding about ME2 coming to PS3.”

That’s what we’ve needed to hear for a while.]