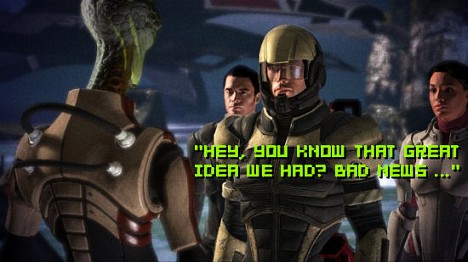 A few days ago we posted an article about the PC versions of Mass Effect and Spore containing some worrying copy protection methods that would require users to validate each game online every ten days. While I expressed concern that such a move could go horribly wrong, others were more vocal — chief among them the BioWare fans who absolutely railed against the somewhat harsh measures.

Well, BioWare has said it listened “very closely” to the fans (though really, you didn’t need a hearing aid to register such fury from PC gamers) and has now opted to back away from the incredibly strict authentication methods. Mass Effect will now only require validation when you first run the game and when you download additional content. How about that, eh? Kicking your legs around and screaming actually works sometimes!

From BioWare’s FAQ on the matter:

BioWare has always listened very closely to its fans and we made this decision to ensure we are delivering the best possible experience to them. To all the fans including our many friends in the armed services and internationally who expressed concerns that they would not be able re-authenticate as often as required, EA and BioWare want you to know that your feedback is important to us.

So there you have it. One of those rare moments of victory for the consumer, and an easier validation process for any PC gamers looking to buy Mass Effect. One can only imagine that Spore will similarly back out of this verification process, but that remains to be seen.