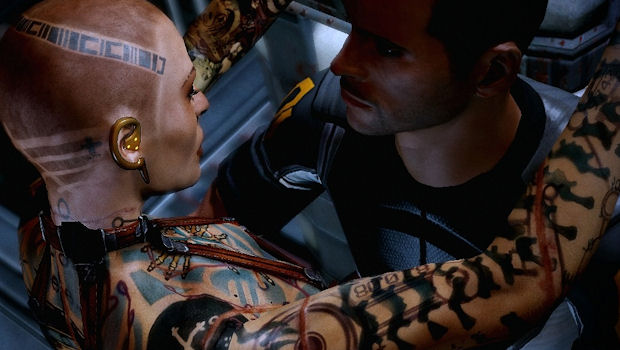 BioWare loves implied interspecies lesbianism, but has so far shied away from providing any man-on-man shenanigans. When asked why Mass Effect 2 lacks the option for gay sexual enterprises, the developer explained that the game has a “PG-13 movie” feel, and that homosexual acknowledgement would compromise that.

“… We kind of pulled back and looked at where we had to draw the line in terms of how much content we make. How much should we support?”, states Casey Hudson. “So we kind of pulled back and said, ‘Well, the love interest is part of the story and it helps you care about the characters in a different way.’ We still view it as … if you’re picturing a PG-13 action movie. That’s how we’re trying to design it. So that’s why the love interest is relatively light.”

So, Commander Shepherd’s sexuality is very much straight — unless blue aliens are involved. Ray Muzyka adds that this decision doesn’t compromise BioWare’s commitment to choice: “It doesn’t mean that we’ve in anyway changed our philosophy toward enabling choice. We love giving players choice, and we are going to continue to enable that for future games. That’s a commitment for some of our franchises. For some other franchises we’ve had more defined characters and sort of approaches to things, and they’ve had a more defined personality and a more defined approach to the way they’ve proceed through the game and the world.”

So there you go. Your male Shepherd will not be enjoying any serious cock and you’re going to have to deal with that. It’s a shame that a game based so firmly around choice can’t provide that, though.