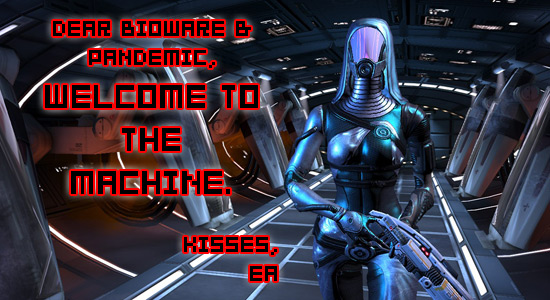 After everyone and their dog reported on the news that Electronic Arts purchased BioWare and Pandemic earlier today, GameDaily.biz apparently went directly to the source to see what the development houses had to say for themselves. They conducted an interview with Pandemic’s Josh Resnick and Greg Borrud and BioWare’s Dr.’s Ray Muzyka and Greg Zeschuk, who were all kind enough to take a break from counting the number of wheelbarrows full of cash EA had sent them long enough to state that both companies would retain their “independent spirit”. While we assumed this merely meant they would be purchasing more Che Guevara t-shirts, apparently they really mean it.

We’re going to hold off on calling them sellouts at least until they start wearing chinos and listening to Perry Como albums, but feel free to judge for yourself: hit the jump for choice quotes from the interview.

On selling out to The Man:

GameDaily BIZ: So why’d you guys do it? What was so appealing about the deal that you’d relinquish your independence?

Josh Resnick: A lot of it actually has to do with John [Riccitiello] and the vision that he brought to BioWare/Pandemic originally, bringing those two companies together to help create the ‘super developer’ model, and it’s about the vision he’s bringing to EA as well. We really love working with them, and not only do we want to continue that relationship now that he’s at EA, but we also want to tap into the incredible power and strength of EA’s publishing organization. At the end of the day we come to work everyday at Pandemic just to make unbelievably amazing games and we want to turn those games into endearing, lasting franchises – turning them into event products. And frankly we can’t think of any better partner to enable us to do that than EA. It’s really about bringing the best of development together with the best on the publishing side.

Greg Borrud: We have been fiercely independent for a long time… I guess I don’t really see this joining with EA as a change in that. We will still maintain that independent spirit and that ability to make the best games possible – EA just allows us to do it on a much grander scale. We’re still going to be keeping our own culture, and we’re still going to be developing the games that we think make us great. So even though to everyone [on the outside] it doesn’t look like we’re maintaining our independence, in our minds we absolutely are… and that’s what John’s laid out for us.

Resnick: We have the full support of John to maintain our culture and our entrepreneurial, dynamic spirit that allows us to make the kind of games that we make.

Borrud: We wouldn’t even have considered this if we felt we would lose what really makes us great, which is the ability to control our own destiny, the ability to recruit top talent in the industry and give people a place that they really can call home. It’s something John is passionate about and we’re passionate about. We want to make sure we’re a strong independent force within the larger organization of EA.

BIZ: You talked about the “independent spirit” before, but as an independent developer you might have more freedom to take risks, whereas being owned by a large publisher now means they have to worry about their stockholders and they might not want to greenlight some wacky, zany ideas that Pandemic has. Are you concerned by that?

Resnick: The interesting thing is that a lot of the value that I think John and EA are placing on us is our ability to come up with what you’re calling wacky original concepts.

Borrud: There are some pretty wacky things in the works. [laughs] EA as a company seems to be very focused on really investing in the growth of original IPs within their organization, and their investment and partnership with us now is a further testament to that because Pandemic has a long, rich history of making great original IPs like Mercenaries and Saboteur and we have a lot of others in the works right now. I’d actually say the opposite [to your question] – EA is very supportive of that creative thinking that’s embodied in who we are as a company right now.

On the future of Mass Effect:

BIZ: I have to ask about Mass Effect because there’s already some speculation that it could be headed to other platforms. Since the IP is owned by you and EA has acquired BioWare, what does the future hold for the franchise?

Zeschuk: Well, I can say it really is an absolutely amazing game – probably BioWare’s best. Ray and I both finished it, played it a lot, and it’s awesome. The thing we can tell you about the future of Mass Effect very simply is that there’s going to be a trilogy; we’ve been on record in the past as saying we want that whole trilogy to be on the 360. We still love the platform, we love working with Microsoft – they’re a great partner – but we can’t predict the future.

There’s a huge amount of content in that two-page interview, so I highly recommend you all heading over to read the thing if you have a free day or two.

Like I said, we’re still unsure of how to prognosticate on this whole thing, but the moment they start grinding the proletariat beneath huge metal wheels made entirely of capitalist rhetoric and hard metal currency, we’re moving to Cuba.