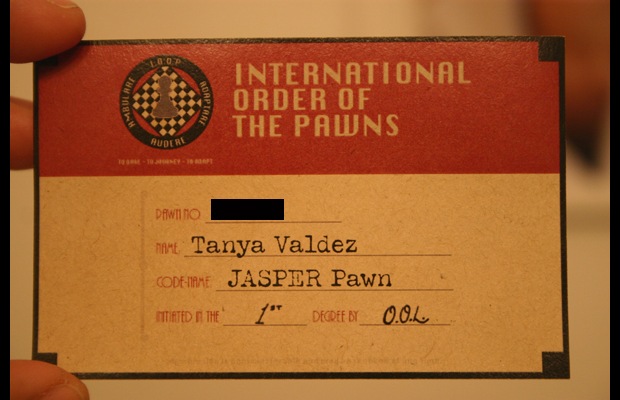 It appears that the BioShock 2 marketing team is beginning to ramp it up a bit more as they’ve sent out cards to a select few that proclaim the recipients as members of the International Order of the Pawns. As Beatboxtaun explains the card came in the mail and are part of an order that was set up to discover what exactly happened to Rapture after it disappeared. Each member of the organization was given a card, but there doesn’t seem to be any reason yet that for people receiving them, though rumor has it today may be the day we find out why they came.

If you’d like to know more about the I.O.O.P then you can read the Wiki excerpt below, but I’ve pretty much lost interest in all of this. Is anyone else really annoyed that this sequel exists and that they’re taking such a fantastically crafted and perfectly enclosed story and stretching it into this story that almost contradicts everything in the first game. I’m really getting the feeling that they’re ditching the philosophical stuff for a big conspiracy/action plot. Maybe I’m just overreacting, but this I.O.O.P. is just another nail in the coffin for me.

BioShock’s: International Order of the Pawns cards- I got mine in! [8bitfix]

The International Order Of the Pawns was a covert organization created by Orrin Oscar Lutwidge in 1956. Its main purpose was to research the mystery surrounding The Vanishing and how it related to the disappearance of Andrew Ryan and the building of Rapture. This organization had members around the world, each referred to by a code name of a pawn color and and degree. Late in Lutwidge’s search for Rapture he became more paranoid, fearful that others would uncover the secret of Rapture. Thus, he began to direct the efforts of I.O.O.P. toward laying false evidence to mislead other researchers, such as Celeste Roget. Lutwidge enlisted the help of the Red Pawn to accomplish this, but in the process he alienated some of his previously faithful pawns who saw his quest become increasingly personal and obsessive.

The code names listed are: