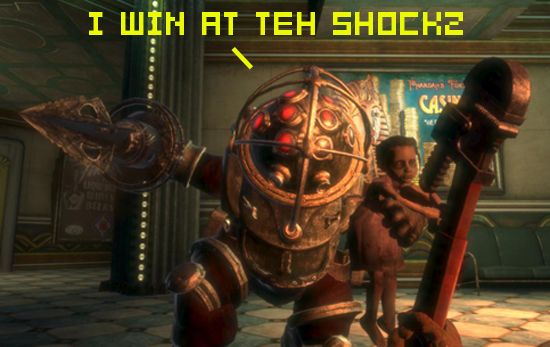 BioShock is doing it’s end of the year award-harvesting as expected, snagging Best Game of the Year at the 2007 British Academy Video Games Awards sponsored by the British Academy of Film and Television Arts (BAFTA.) Neil Ralley, the General Manager of 2K Games, was quoted as saying:

““BioShock is a testament to the unfailing creativity, expertise and efforts of our Boston and Canberra, Australia-based development studios. Furthermore, it demonstrates that compelling and original games, if properly supported, are capable of achieving immense popularity. We’re very proud of BioShock’s critical and commercial success.”

Good point, Neil. BioShock certainly is a victory in the way of boldly original content becoming a mainstream success. Like any wonderful recipe, the ingredients are never exactly the same, so we can wax poetic as long as we like about what made this title incredible. For me I still believe that the bottom line is innovation – pushing for the ideas that really electrify you and unifying other people towards the actualization of that idea.

I hope by proving that a game like BioShock can be a money maker as well as an award winner, we’ll see more great content that breaks down the comventions of gaming in the future.

[Via Businesswire – Thanks Jonathan!]