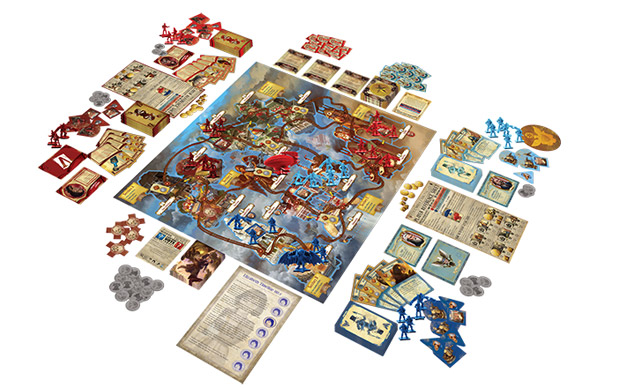 Pre-order now for a $25 discount

The Internet is abuzz about Irrational’s long-awaited BioShock Infinite. Amidst all of the discussion and praise for the videogame, Plaid Hat Games has announced BioShock Infinite: The Siege of Columbia, a board game adaptation of the events surrounding Booker and Elizabeth during their trek through Columbia.

The Siege of Columbia pits two teams of one or two players against one another, each controlling either the Founders or the Vox Populi, with Booker and Elizabeth acting as neutral figures that can affect the battle between the two main factions. Among the detailed plastic figures shown are Handymen, the Songbird, and a zeppelin (presumably the First Lady).

The full rulebook is set to be posted online soon, but if you’re already sold on the idea of taking control of Columbia in board game form, you can pre-order the game now for $60 from Plaid Hat’s store, a $25 saving from the MSRP of $85. An exact release date hasn’t been given, but The Siege of Columbia is set to show up in stores sometime in the next two to five months.