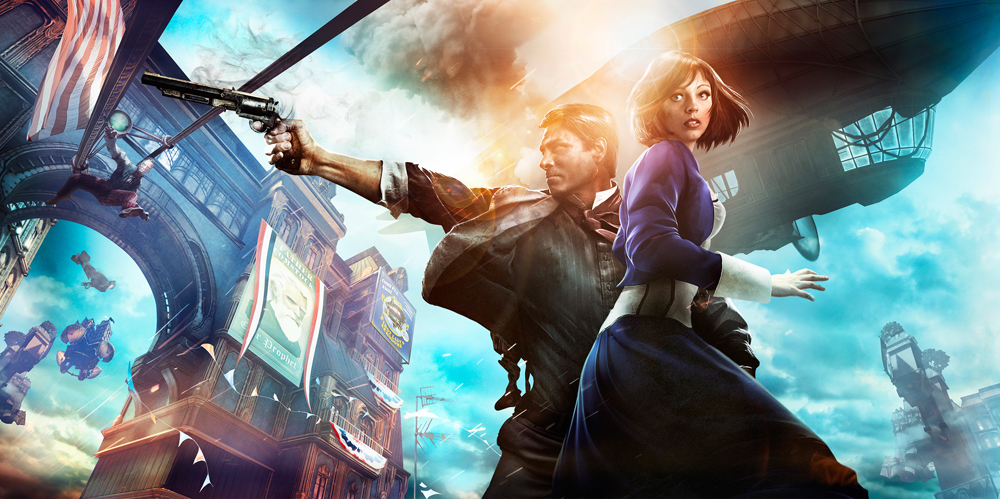 BioShock Infinite begins much as the original begins: a mysterious man, lost at sea, on a mission that starts at a lighthouse and leads to who knows where. But then, the player ascends up toward the heavens, or at least what a citizen of the flying city Columbia calls, “the closest you can get to heaven.”

It’s as if Irrational is commenting on BioShock’s own evolution. Upon entering Columbia, the story we left behind in 2007 is so far below that you can barely see it. Any lingering memories of Rapture fade away among the bright sky and lights of Columbia’s floating city blocks. It’s a world so detailed that it makes one wonder what’s the point of high definition if not all of our games feature a similar quantity of original art assets as this one.

In my three hours spent playing BioShock Infinite from its opening, I have to say that it indeed seems to be the closest you can get to heaven.

It’s hard not to dip my feet into hyperbole when discussing the original BioShock’s impact. It changed the way I played games. Literally.

On my first playthrough, I blasted through it while listening to music on my iPod. Videogame stories are generally trite, shallow, and dull, so why would BioShock be any different? Upon hearing from critics and friends that the story is what makes the game special, I played through BioShock a second time, listening to every audio log and absorbing every environmental detail. It enriched the way I digest videogames — a personal transformation that would mean very little in the narrative wasteland that would follow.

It’s 2012 and I still feel like barely any developers have learned from BioShock. Well, barely anyone besides Irrational. BioShock Infinite is everything BioShock was, yet better. But what blew me away from the game’s first three hours is that it isn’t what I expected. How can you expect the unexpected, after all? Infinite’s world is one of pure imagination and wonder. It’s story is much denser and full of controversial subjects that hit close to home. It’s dialogue is much warmer, lively, and comfortable with comedic delivery. And, its visuals? Oh boy.

Even with some real nasty Unreal Engine 3 texture pop-in (on Xbox 360), Infinite is the most beautiful game I’ve ever seen. On PC, Infinite becomes a portal into another world that speaks to the soul without even a whisper. Anywhere your eyes fall, there is a possible screenshot to be had — the type of screenshot that Dead End Thrills would painstakingly frame in another game. In Infinite, these wonderfully composed frames simply exist all around the player.

Aesthetics is rarely how I lead a preview, because it’s not often what creates immersion — what I consider the most important aspect of games. The enchantment has been undone and we now understand as consumers what lazy developers probably hoped we would never realize: Scripted events aren’t enough to create immersion. What creates true immersion in videogames is attention to detail.

Even lacking its final layer of polish, Infinite is a title so rich with detail that it astounds me to think this is a game being released on current gen consoles. Walking the floating city of Columbia’s garish city streets, full of painstaking detail, makes me realize that we’ve been living in the fake HD era. Columbia is something greater. It’s a place you can believe in. Virtual tourism has never been better. There is always so much to look at, interact with, and listen to. If Irrational made the next Yakuza, I feel like us nerds would have the cheapest ticket to Japan ever sold.

These details extend beyond level design and art direction. There is a ladder that someone expects you to climb. In any other game, NPCs would awkwardly stare at you as you hesitate to act. In Infinite, the NPCs make a conversation out of the player’s reluctance to climb.

There is a preacher giving a sermon. In any other game, the sermon would go on for a little bit and then end, expecting the player to trigger the next scene. In Infinite, the sermon goes on and on and on, until I started questioning why I was even listening to it and what my role is in this scenario. I won’t say something a crazy person would say, like “I forgot I was playing a videogame.” But sliding into this role and this world is so seamless and easy that it’s almost worrisome.

I can list off many more small details, but I’d like to put the lens onto a much bigger part of the game: Elizabeth. Though her dress, acting, and dialogue conveyed a pure innocence in past Infinite demos, Elizabeth’s actual role in the game wasn’t clear. There’s a good reason for that: It’s never clear and that’s part of its charm. She serves as a conduit for some battle mechanics, such as summoning support items, cover, and turrets through opening rifts. Sometimes she just wants to hang out, throw the player some money she found in a crate, comment on a sign found in the street, or wander off and explore.

If the main protagonist Booker DeWitt supports the player’s bloodlust, Elizabeth supports the player’s curiosity about the world. Locked up in a tower throughout childhood and sheltered from evil, Elizabeth enters Columbia wide-eyed and giddy. She celebrates the blue skies above, other people around her and freedom to explore like we all did upon playing our first Zelda game. I felt good being around Elizabeth.

She’s more than just a chess piece in Infinite’s story. Elizabeth encourages the player to experience Columbia in a way that they might not without her. There is a scene where she invites Booker to dance with her on a dock at dusk. She spins like a Disney princess and rests her saucer eyes on the player. It’s that moment when I think, “I will cut Levine if something terrible should happen to her!”

I’ve talked about the good of Infinite, so let’s address the minor nagging issues I have with the game’s combat. Here’s the deal: It’s too good. Bear with me for a moment. The original BioShock was a rather slow-paced dungeon crawler with a few combat encounters that got a little hectic. Infinite’s combat is much faster and vertically-inclined, in part due to the skylines — elevated railways that you can hook onto and ride like a rollercoaster; a sensation on par with a stellar racing game. Numbers now pop above an enemy’s head. Vigors, powers that are akin to Plasmids from BioShock, offer strategic depth since you can use each as an offensive projectile or defensive mine. There is now gear and various other ways to upgrade your abilities too.

Infinite’s combat is fast and thrilling, but it creates a dissonance between the exploration and action that didn’t exist in the first BioShock. Whenever a major fight ended in Infinite, I wanted more. Stopping to open every crate, explore every corner, and view every silent film (there are audio logs as well) requires an amount of self-discipline that can be difficult to summon. Perhaps the pace slows down a bit as the game goes on. Other than this, I can’t say anything all that bad about the combat. The AI isn’t anything to write home about and I’m very disappointed about the two-weapon limit, but these are the sort of things you can forgive.

The main thing that separates Infinite from the first two BioShock titles (and damn near every game in existence) is that it’s a celebration of life instead of death. No longer are you walking through the broken homes that once existed in Rapture. Now, you walk city streets populated with happy people living their lives. Rapture was a place where inventions served a practical purpose, but, in Columbia, technology is dedicated to novelties that beget amusement. Underneath the firmament and optimism is a story about the freedom to be happy, who deserves it, who doesn’t, and why. The narrative choices may lack depth, but the overall impact of the story should be one that leaves players racing to forums to discuss.

As much as I enjoy BioShock, I never thought it lived up to the promise of wonder that the opening 15 minutes delivered. Even after two hours, I barely scratched the surface of Infinite’s world, story, and combat. There is still so much to talk about and so much I want players to discover for themselves. Even as the demo came to an end, I couldn’t believe my eyes.