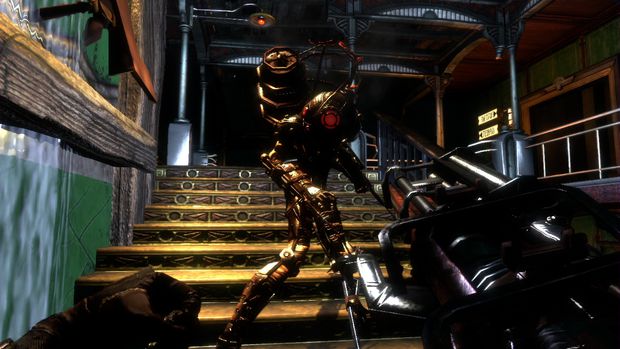 During the hands-on preview night of BioShock 2, we learned a lot of new details about the game. Probably one of the bigger revelations about the BioShock 2 that was shown was the fact that there are multiple Big Sisters now. She isn’t the central bad guy anymore, but she still is going to a tough character to fight.

I got a chance to talk to Lead Level Designer JP Lebreton and Senior Designer Kent Hudson on BioShock 2 and found out exactly why the Big Sister’s role in the game has changed. Hit the break to get the lowdown.

DESTRUCTOID: Initially when the game was announced, it sounded like the Big Sister was the one just big bad guy that you’d be fighting throughout the entire game. It seems like that’s changed, that there are multiple Big Sisters now.

JP Lebreton: It’s true. And it’s a combination, honestly, of some story developments that we can’t talk about, but also the fact that the work that we invested in her, making her a memorable character, and a cool AI to fight with a lot of different abilities. Kind of like the Big Daddies of the first game, although, yeah, she’s kind of a swiss army knife of different cool behaviors.

Part of the decision to make her a plural thing, a force in the world and part of the ecology of Rapture in the way that Big Daddies and Little Sisters are, was really just, yeah, A) letting the player experience that as much as we wanted them to, and B) giving them the satisfaction of defeating one, rather than having a story character that shows up –

Kent Hudson: Every time you see the health bar reach 15% they run off, and it’s like “aauuggh COME ON!”

Kent: Yeah, they’re harder, and they’re just different. You know, we wanted the Big Sister to not feel like just another Big Daddy. We do have another Big Daddy, he’s different and he’s cool. He’s a lot more defensive and he’s got those turrets, he shoots rockets. He’s got his own personality. But we wanted her to be fast, you know, be agile, be scary. You know she’s darting around the environment, she’s jumping off walls, she’s jumping up and down on balconies and going behind you. Just really have that different sense that, okay so yeah, now you’re a Big Daddy and a lot of people are saying “Well if you’re a Big Daddy, what do you have to be scared of right? You’re the most powerful thing in the environment.” And it’s like, well, no, wait a minute — there’s this other thing — and you’re a big strong dude, but these Big Sisters are just a whole different level of challenge for you, and they hunt you, and pay attention to what you do in the world.