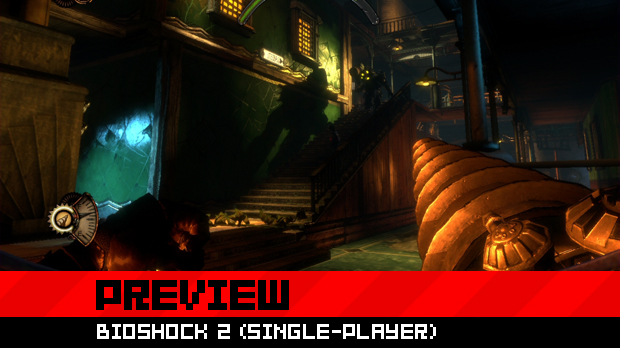 In 1960, a man named Jack came down to Rapture and did things that would change the city forever. He killed the founder of Rapture, Andrew Ryan, took away the precious ADAM supply by taking the Little Sisters out of the system and then left the city to die. No leadership, no ADAM — just an ocean of misery.

Ten years later, a new power has taken control of Rapture, Little Sisters have been brought back into the city and new enemies await that Jack wouldn’t be able to survive against in this new order of Rapture. Luckily, you’re not playing as a regular person. You’re a Big Daddy, the first one ever made. Not only are you a Big Daddy, but you’re one that has free will, and your actions will change Rapture once again.

I got to test drive the new Big Daddy in BioShock 2 at a worldwide press event 2K hosted in San Francisco not too long ago, and left with a sense of excitement. Hit the break to see what you can expect in the highly anticipated sequel.

Before getting to play, we were given a little taste of the overall story of BioShock 2. With Andrew Ryan gone, Rapture was left like a chicken with its head cut off. The city wasn’t going to survive without some kind of leadership and soon enough, Dr. Sofia Lamb rose to power and now controls the city. Lamb is an idealist and an old political rival of Ryan. Whereas Ryan believed people should strive for themselves, Sofia believes that everyone has an obligation to the world.

Dr. Lamb’s schemes were going according to plan until the original Big Daddy, named Delta, was awoken. This Big Daddy has free will, but his only objective is to find his Little Sister. Like all the other Big Daddies, Delta was paired with a little girl and that girl is the only thing that gives meaning to him. Over the course of the game, you’ll come to find out that Delta’s Little Sister is somehow important — not just to Delta, but to everyone in Rapture.

After that brief overview, 2K did a play-through of the “Siren Alley” level. (You can see a bit of this gameplay by watching the above trailer.) Siren Alley is the red-light district of Rapture, but before the civil war broke out, this was the place where all of the city’s architects would work to expand the city. Siren Alley is also where you’ll find the city’s pumping station. A part of Rapture that you need to go to is flooded and the controls are located in this area. The pumping station is also where Lamb’s most powerful lieutenant, Father Simon Wales, happens to have a church set up.

The level starts off just as Delta comes across a couple of Splicers attacking the new Big Daddy model, the Rumbler. The Rumbler has a shoulder-mounted rocket launcher and automated mini-turrets that it can throw down. The Rumbler quickly puts down the Splicers and goes back into neutral mode as he follows his Little Sister around. The player then takes on the Rumbler by using a combination of a Security Plasmid to summon a security bot, Telekinesis to throw back rockets and the Rivet gun. Remember, you can now use your Plasmids and guns at the same time.

As the Little Sister is harvesting this Angel, you get to go toe-to-toe with a brand new Splicer. His name is the Brute, and he’s been Splicing himself up stronger and stronger ever since the events from the first game. The Brute is the strongest of all the Splicers and sits atop of the ADAM food chain in Rapture. The Brute also likes to use the environment to its advantage and will throw whatever isn’t nailed down at you.

When the Little Sister is done, Delta has some ADAM to spend at a nearby Gatherer’s Garden. After upgrading, it’s time to head toward the pumping station. Once there, you’ll find Father Wales giving a sermon to the Splicers in his congregation. The Father has spun Lamb’s philosophy into an easy-to-understand “religion” for all Splicers to follow. Before the Father can finish, Delta attacks the group of Splicers, including another Brute that drops in. Once all those Splicers are killed, the Father comes out to attack but is quickly taken out.

After this, the player saves the Little Sister and then activates the pumping station. As this happens, the shrieks of the Big Sister can be heard in the distance. The Big Sister’s role has changed since BioShock 2 was first announced. There are now multiple Big Sisters, and they’re Dr. Lamb’s most powerful enforcers. Siren Alley is now getting flooded and Delta has to escape. As you’re running away, the Big Sister confronts you, but you don’t have the time to take on the Big Sister in a direct one-on-one battle. You have to run and gun towards the exit and luckily, the player comes across a Brute. Delta uses the Hypnotize Plasmid to sic him on the Big Sister. Just as the Big Sister is killed, the entire level gets flooded with ocean water, leaving the Big Daddy to hear Dr. Sofia Lamb’s cold harsh words.

With the presentation done, it was time to go hands-on. The demo started off near the beginning of the game with Delta on a train heading towards a certain location. But the path is blocked by a large chunk of ice, so Delta needs to make a pit stop to get the Incinerate Plasmid. On the train with you is Sinclair. He’s like Dr. Tenenbaum/Atlas in BioShock 2 — he will guide you to where you need to go. It’s not clear whether Sinclair’s intentions are good or bad, but he opposes Dr. Lamb, so he’s on your side for the time being.

Sinclair knows where you can find the Incinerate Plasmid, but you’ll have to go through Ryan Amusements to get it. The amusement park is a giant propaganda machine created to scare the kids of Rapture so they don’t ask about the surface. The park is filled with giant animatronics such as two giant hands reaching into a house and taking away a family’s child. There are Andrew Ryan animatronics throughout the park and his voice narrates the entire ride: “The government repress and take,” Ryan says as the hands of the government take away the people’s work. The amusement park also has a little background on how the city of Rapture was created.

Before moving on through the level, I got a feel for the Big Daddy. The controls are largely the same, with the major addition being the ability to use your guns as melee weapons and holding the left trigger to charge up your Plasmid attacks. The Big Daddy starts off with the famous Drill, the Rivet Gun and the Hack gun. All of the weapons in BioShock 2 can be upgraded to three levels (the third upgrade opens up once the two other upgrades are used on a gun) at a Power to the People station, and most weapons have up to three different ammo types that can be used. Players can also use the lunge attack with the Drill and it does need fuel in order to work.

There have been a lot of improvements when it comes to keeping players engrossed in the experience, too. For example, there’s no longer the Pipe Dream hacking game. In place of that is a meter with a needle that moves left to right. You need to stop the needle on the green spots three times to take over whatever you’re hacking. This is happening in real time, so you can actively be engaging enemies while hacking.

You can’t enter Ryan Amusements until you get a ticket. I had to explore the surrounding area first, where I encountered plenty of Splicers that I took out with ease. The combination of the Plasmids with the powerful weapons of the Big Daddy makes things ridiculously easy, as they should be. You are a Big Daddy, after all. After grabbing the ticket, I made my way back to the entrance where I picked up a chain gun and then entered the park.

As you go through the park, you’ll come across a Big Daddy with a Little Sister. You need ADAM to buy Incinerate, so you have to steal this Little Sister. Once she’s in your position, you’ll be hunting down some Angels until you have enough money to get Incinerate. If this part didn’t require me to need more ADAM, I would have completely forgotten the Little Sister was with me. I got so entranced by the park and the story it was telling, that I completely forgot what my main objective was. The Little Sister spoke, yet I was oblivious to her until I stumbled upon an Angel corpse by accident.

After getting enough ADAM, I saved the Little Sister and then got myself the Incinerate Plasmid. Making my way back to the train, the screams of the Big Sister filled the air until I reached the main entrance to the park again. Rather, the Big Sister used her amped-up Telekinesis ability to rip open the door and drag me out of the hallway. It was one of those “OH SHIT!” moments that I never would have expected to happen.

Once I calmed down, I took on the Big Sister and was actually let down by how easy the fight was. It takes longer to kill her than a Big Daddy, but that’s mostly due to her being extremely agile and jumping around all over the place. Otherwise, she’s not as challenging as previously believed. I think that’s largely due to the fact that she’s no longer the main villain anymore. Now there are multiple Big Sisters, and making them all incredibly hard would probably be too much to handle.

After fighting the Big Sister, Delta heads back to the train, melts the ice and then meets Sinclair face-to-face. He says some things to Delta and then the both of you enter the train to your next destination, thus ending the demo.

The story so far is intriguing. We don’t know much, and it’s probably best to know as little as possible when it comes to BioShock. Playing as a Big Daddy feels extremely empowering, and the one environment I got to play through easily sucked me into the world of Rapture once again.

Stay tuned to Destructoid as I’ll be bringing you a preview of BioShock 2’s multiplayer, and I’ll also have some juicy tidbits to share with you throughout the day.

Filed under... #2K Games#BioShock#Destructoid on assignment