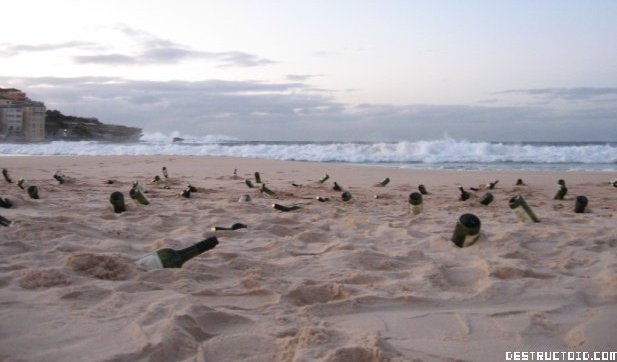 Yesterday we speculated over one of the mysterious notes from the BioShock 2 website Something in the Sea which indicated an event which would take place at ten beaches around th world at specified times. Curious, some folks showed up at Bondi Beach in Australia today and found what you see in the pictures above – buried wine bottles waiting for them in the sand!

Within the bottles (which were marked “Acadia”) were three promotional posters for Rapture (see gallery), including ads for two plasmids: Electrobolt and Decoy. All I can say is … wow. I’m impressed with the BioShock 2 PR team more than I thought Iever could be. Hats off, guys –keep it up at this rate and you’ll have more people frothing at the mouth to buy the game when it comes out then you ever could have hoped for!