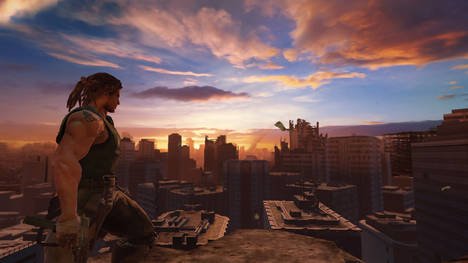 There I am, standing on top of a building holding a sniper rifle and looking down on the adjacent roofs below me. Bionic Yellow has just burst into a zig-zag running pattern upon noticing that the red sight from my sniper rifle was on him. I shoot at him three times, missing each shot. I take a breath, line up the shot and am about to nail Yellow when I get hit with a shotgun blast.

The shot comes directly from my right, and I know I’m in a bad position, as there’s nothing I can counter with immediately. So I do the only thing that’s logical at that point: I jump off the roof, towards my doom on the streets below. Crazy, or a brilliant tactic? Hit the jump to find out.

[Editor’s note: All screens from the single-player. Check back later today for a new trailer showing off the multiplayer.] 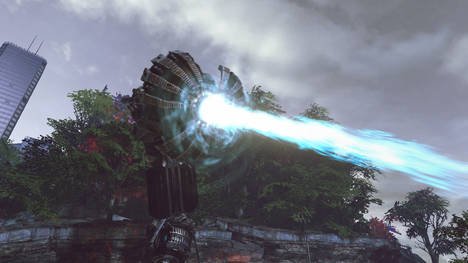 As I’m swan diving towards my inevitable death, I turn my body around and aim for the side of the building and shoot out the grappling hook from my Bionic arm. I grab hold of the building and slowly ascend, waiting, trying to anticipate where Mr. Shotgun will jump off the building himself to finish me off. I don’t have to wait long, as a new fight has started up on the rooftop, and I know it’s time to come back up and crash this party. I double-tap the A button, which sends my Bionic Commando up into the air, super jumping to the top of the roof.

This was a very early preview build of Bionic Commando’s multiplayer, as there was only one multiplayer mode and only one map available. The game will support up to ten players in multiplayer, but we were limited to only four players for this preview. Even though it was a very limited preview, I found myself having tons of fun just going around killing people, over and over for about three hours. 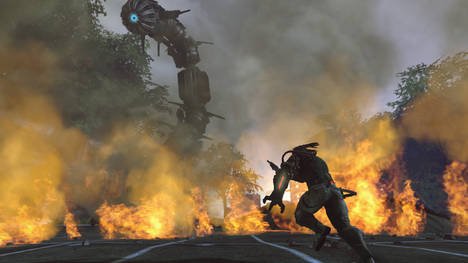 The goal, like in any deathmatch setting, is to kill your opponent. Thanks to the Bionic arm, you won’t be limited to just using guns to take others out. You’ll actually be able to grab your opponents with your grappling hook and fling yourself into your them, drop kicking them into the air. In most cases, people will be able to recover from this by grappling to a building, but if you’re able to kick them off from near the edge of a rooftop, they’ll have no way of recovering and will fall to their death, as they’ll be too far away to grab onto anything. If you are grabbed, though, you’ll be able to roll out of the grapple by pressing the left bumper, which makes your Commando do a roll. You’ll have to be quick, as you can be kicked off of roofs, too.

Grappling opponents, and any surface for that matter, is a simple affair. All you do is aim towards something you want to grapple, and your aiming reticule will change colors, indicating that you’re able to grapple the object. Once your reticule changes, you’ll just need to press and hold the left trigger, and the grappling hook will attach to whatever you’re pointing at. Pressing A once will retract the arm, pulling you into the object you grabbed. Pressing A twice lets you do a sort of spring jump that helps you get higher onto the side of a building (to where you can grapple the building again and repeat the process till you get to the top) or throws you on top of an object like a platform, tree branch and whatever else you can stand on. Releasing the left trigger will release your hold on an object.

Weapons and body armor will also be grapple-able. Each section of the map held a little weapons station with a hovering 3D holographic representation above the station showing which gun was there. Weapons in this preview included the pistol, assault rifle, grenade launcher, shotgun and sniper rifle. You can either use your grapple to grab a weapon or walk right over it to pick it up. Unlike other games where the weapons will magically respawn back into their place, you’ll actually see a door open up at the weapons station with a replacement gun after several seconds. 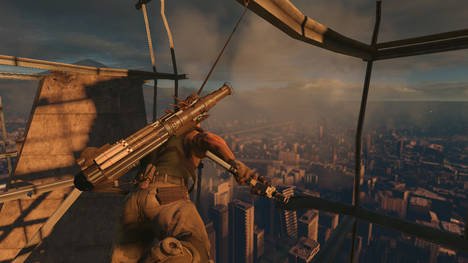 Every Commando started off with a pistol and you’ll be able to hold several weapons in your inventory. You can cycle through your weapons with the right bumper or hold the bumper down to see a menu of all your weapons and then manually select which one you want. Pressing the right stick in will switch the camera to over your shoulder, allowing for an easier method to aim your weapon, but it does limit how fast you can move around.

There were also be a couple of body armor stations and health pickups scattered throughout the map. The health pickups, unlike all of the other items, are not grapple-able, so you’ll have to walk over the health packs to heal yourself.

After every match, you’ll see how many points and experience you’ve earned, but I’ve got no idea what the experience points are for yet, as we weren’t told. Nick talked about being able to upgrade weapons in the single player game from his CAPTIVATE hands-on, so maybe the XP will relate to which type of weapons you can get, similar to Call of Duty 4. You’ll also be able to earn points based on how you kill enemies (e.g., kill two people at the same time, snipe someone in mid-air, kill a guy with a ricocheting grenade, etc.).

I haven’t been this excited to play a multiplayer game in a long, long time. The Bionic arm opens up a whole new play style for the typically traditional versus mode. You won’t know if you’ve truly kicked someone off of the map to their doom or if they’re hiding on the side of the building, waiting for you to join them. There’s nothing more exciting than having a four-way battle on the side of a building. There was no radar at all, and I hope it stays this way, as radar — to me — would hurt the experience.

Bionic Commando will be out for the Xbox 360, PS3 and PC sometime this holiday season, which according to Capcom, is about a six-month-long window.