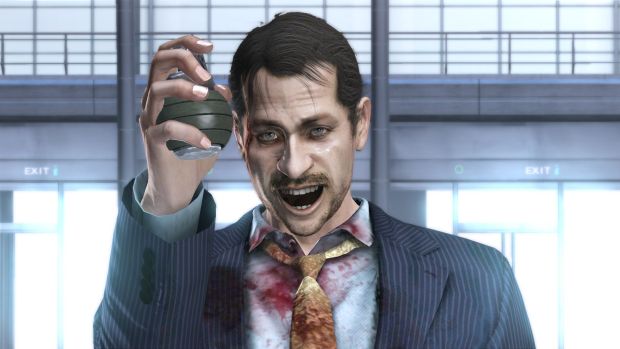 [This is the first in a series of exclusive guest blogs from the development team at Yakuza Studio on Binary Domain. General Director Toshihiro Nagoshi details the story of Binary Domain and the conflict between robots and humans. Binary Domain will be out on February 28 on the PlayStation 3 and Xbox 360. Stay tuned to Destructoid for more guest blogs up to the release!]

Binary Domain takes place in the world of year 2080 — a future not so close but not too far. The sea level has risen due to global warming, so the people are forced to abandon the modern day cities at ground level and create new high rise cities creating an upper level. It’s not an ideal future but it’s not complete fantasy. When we decided to challenge the Sci-Fi genre, we were careful to make the setting not something outrageous but to make it look contiguous from the modern day world of 2012. We believe this would be the key to allow the players to easily understand the world of Binary Domain.

The same concept goes for the other pillar of Binary Domain — the robots. Nowadays, robot technology is advancing with outstanding speed, and we are starting to see robots that are capable of morphing complex human movements. Every time I see such new robots, I am amazed with the level of technology we have reached. Today, we’re still capable of watching such robot evolutions in peace, but what if the time comes when we succeed in creating a robot that looks exactly like human, and with AI that can think on its own? Would we be able to stay at peace and not feel threatened by them? 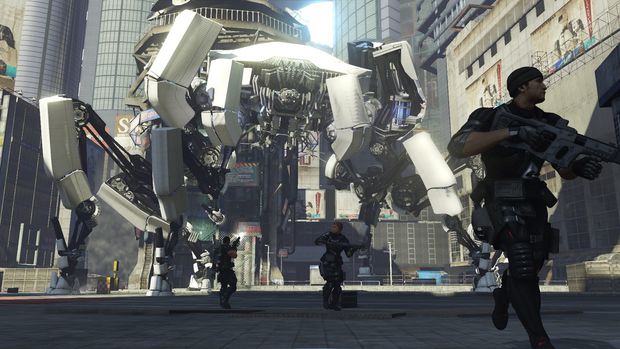 Well that wasn’t the case for the humans in the world of Binary Domain. They decided to regulate the creation of such robots. In 2040, the people agreed to an international treaty called the “Geneva Code”, which forbid the creation of human-like robots. In other words, the law forbid the robots from getting any closer to humans. The treaty was signed at Geneva, the city where Mary Shelley is said to have come up with the idea of Frankenstein.

We have seen many movies that warn us about the world where excessively advanced technology has gone beyond human controls. James Cameron’s The Terminator is probably the most well-known example. The world of Binary Domain did not ignore such warnings, and countries work together to regulate robot technology. However, starting the regulation from 2040 was already too late…and that’s where it leads to the story of Binary Domain in the year 2080. The world suspects that the “Hollow Children” — the human-like robots the Geneva Code forbid – are being created by a Japanese robot manufacturer, and Sergeant Dan Marshall is assigned to a covert mission in Japan. Along with his squad mates, Dan battles against Japan’s Defense Forces in order to find out who created the Hollow Children and for what purpose.

My development team has previously created the Yakuza series for Japan, which has been acclaimed by many players for its deep story. Through the experiences of developing the Yakuza series, we learned how a game with good story would remain strong in the players’ memories, and we also learned what we need in order to make a game accepted in the Western market. 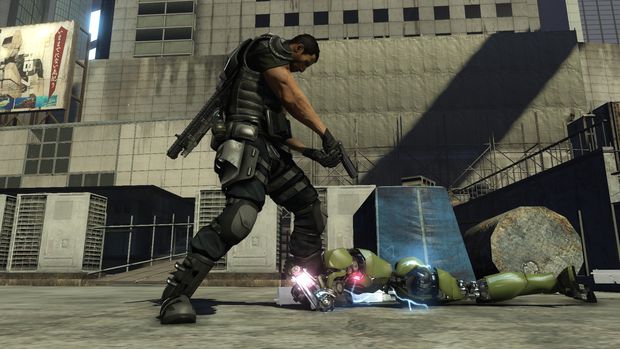 Yet, with so many great games already dominating the Western market, we came to conclusion that we should create a game that can only be created by Japanese developers. That was one of the reasons we chose Tokyo for the world of Binary Domain, and we also wanted the Western players to know more about Japan through this game.

Also, in order to join the third person shooter genre that’s already close to reaching the limits of current videogames, we decided to offer a brand new gameplay feature. This is the “Consequence System” that allows you to cooperate with the NPCs through voice input. Your gameplay strategy can be chosen from an unlimited number of options, not only through a vast variety of weapons but also by giving out orders to your comrades during all the gun battles. This is one of the great features of Binary Domain that I would really like everyone to try out.

This game is aimed not only for Japan but for the worldwide market, so we went through quite a lot of difficulties with the new PR campaigns and marketing strategies. However, through these blogs we got the chance to speak our minds straight to all you readers, so I hope you get to know more about our visions behind Binary Domain.