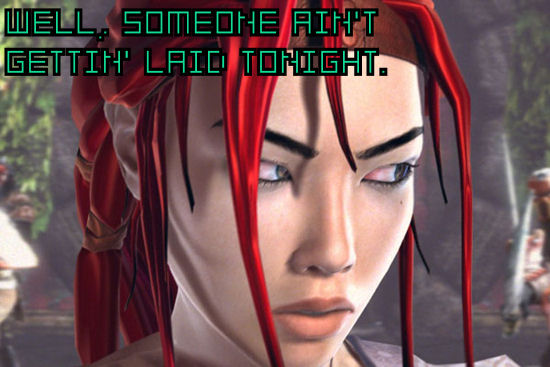 It was but a few scant days ago when Team Ninja’s Tomonobu Itagaki was mouthing off about how Tekken 6 sucks and yet he’s already back on the diss-wagon, slandering yet another game he hasn’t played yet. Next up on the chopping block is Heavenly Sword, the September-bound action adventure heading to the PlayStation 3. In a recent issue of EGM, our gobby game creator had this to say about the game with the world’s greatest cutscene:

“I’ve never played a good game where the developers put a big icon of the button you’re supposed to press onscreen. I look at Heavenly Sword and it seems really half-assed, because it’s asking you to do all these button-timing sequences but you are not getting much payoff from it.”

Yes, you read that right, Itagaki has never played a good game with big button icons in them. But hold on, isn’t this the guy that liked God of War? I guess he was lying that time, since GoW has such icons. What about Resident Evil 4, I suppose that sucked too, right? Then there are all those rythm action games that are obviously half-assed. Sorry, but that was an incredibly lame statement, regardless of whether Heavenly Sword is a good game or not. Must try harder with your controversy, Itagaki-san.

Naturally, Heavenly Sword‘s producer Kyle Shubel had a few things to say about such criticism, but if you want to read his words, you need to press that big green button down there, in a manner that would sicken Mr. Itagaki. Go on, I dare you!

[Thanks to Christian Hernandez for this]

“My response to Mr. Itagaki would be that the intent of the Hero sequences is to empower the player to experience events that would be nearly impossible to play in a natural platforming state… for example, making the player run down ropes, leaping from rope to rope as they’re being cut from underneath you, all while dodging other objects – that would be a frustrating experience to 99 percent of our users if we were to force them to do that manually.”

He’s right, really. Trying to do certain action sequences manually would be a nightmare for developer and gamer alike. I’ve always enjoyed the button presses in God of War (less so in RE4, but that’s more execution than format) as it allows you to look at some great animation without completely feeling like you are not the one directing the action. It’s always felt very satisfying and fun for me to take part in such sequences. Some of my most thrilling moments in gaming came courtesy of this very same formula in Fahrenheit. Oh, and don’t get me started on Gitaroo Man.

So like I said, Itagaki missed on this one.