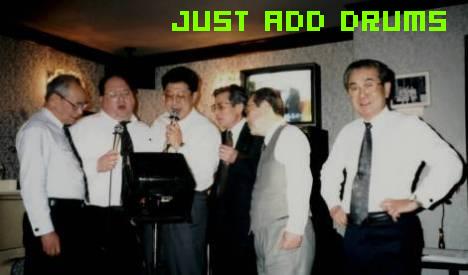 Sweet, sweet irony. It seems that Japan, the country that made rhythm games what they are today, is getting a localized version of Rock Band courtesy of Harmonix and Q! Entertainment of Lumines, Rez, and Every Extend Extra Extreme fame. According to the press release (viewable after the jump), the Japanese version of Rock Band will feature Japanese musical acts as well as other local music.

Considering the overwhelming popularity of “casual” games in Japan, it seems likely that a localized Rock Band release will do well in that area. If the Japanese version of Rock Band results in J-Pop DLC being made available, then all the better. No information is available yet on whether this is being released for all consoles or not, though with the assumed popularity of the port, any console exclusivity for the Japanese release is likely to have interesting results.

Harmonix and MTV to Partner with Q Entertainment for Rock Band: Japan

CAMBRIDGE, Mass – June 2, 2008 – Harmonix Music Systems, the leading developer of music-based games, and MTV Games, a part of Viacom’s MTV Networks (NYSE: VIA, VIA.B), announced today that they will team up with Q Entertainment, a leading Japanese music game designer, to bring the best-selling music videogame Rock Band to Japan. The two studios will work together to develop the title, marking the first US-originated rock music game to be heavily localized for the Japanese market. The game will feature Japanese musical acts as well as other localized assets.

Rock Band’s return to the birthplace of rhythm games will benefit from Q Entertainment’s experience designing progressive and engaging games many of which have a heavy focus on integrating music elements into gameplay. Since its founding in 2003, Tokyo based Q Entertainment has become a leader in rhythm oriented titles, including the critically acclaimed music and luminary action puzzle game series Lumines,and the recently released Extend Every Extra Extreme (E4) and Rez HD for Xbox Live.

Today’s announcement was also featured Saturday at the 2008 MTV Video Music Awards – Japan, where a Rock Band trailer was presented. The US-version of Rock Band was also prominently featured backstage and at the afterparty, giving Japanese attendees a taste of what’s to come in the newly announced title.

Rock Band, which has sold over 3 million units in North America and Europe, is an all-new platform for music fans and gamers to interact with music. The game challenges players to put together a band and tour for fame and fortune, mastering lead/bass guitar, drums and vocals.With more master recordings than any other music game, Rock Band features some of the world’s biggest rock artists and spans every genre of rock ranging from alternative and classic rock to heavy metal and punk.

Rock Band is a true music platform, with over 12 million songs sold as downloadable content since its initial release. There are currently over 140 songs available for download in the Rock Band Music Store and Harmonix continues to release new music every week.