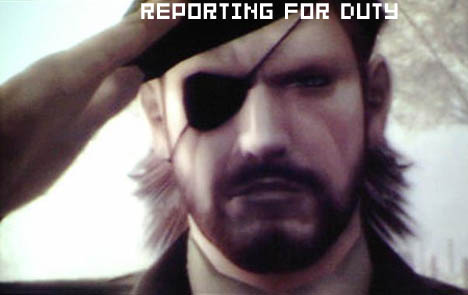 It’s not over? I recently finished Metal Gear Solid 4. It took me nine f*cking continues to win that last fight. I love the game and the series, but after that, I’ve had my fill of controlling Solid Snake! No worries, though. It looks like future Metal Gear games will focus on other heroes.

1UP spoke with assistant producer Ryan Payton, who points out that MGS4 isn’t necessarily the end of the series.

“There are some misunderstandings that this is the final Metal Gear game. But it’s really the final chapter of the Solid Snake story. That’s all.”

If Snake is out, then who? Payton notes that there is “still a lot of room for filling in the gaps as far as Big Boss is concerned.”

That makes sense, but it doesn’t take too much of an imagination to think up a scenario or two for a future game. Series fans know that the Metal Gear story has an absolutely massive cast. In a game world that revolves around cloning and cybernetics, just about anything is possible. And really, how many times have you said “that bitch ain’t dead” while playing a Metal Gear series game?

Play tells us that the producer also says that new maps, skills and rules will be added to Metal Gear Online in the future.