I have been following Beyond Eyes since I first heard about it a year and a half ago. Videogames can be powerful tools for relating experiences that may otherwise be difficult to comprehend. Blindness both fascinates and terrifies me; I know I would be utterly useless without my sense of sight, but others manage impressive feats despite the disability.

So when I heard that Team17 was bringing Beyond Eyes to PAX East, I had to go and check it out. Despite starring a blind girl, it makes excellent use of color in telling her story. Not only that, but it uses other visual tricks to represent her perception of the world through hearing, smell, and touch. 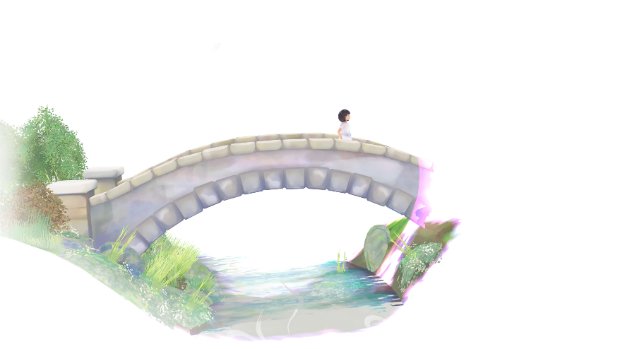 Representing blindness through a primarily visual medium is tricky. I can imagine a game that goes whole hog, only showing what a blind person skilled with echolocation can perceive, but then most players would shut down and quit. Beyond Eyes takes a more user-friendly approach; protagonist Rae can sense her immediate surroundings, which remain displayed for the player to see, leaving a painted landscape in Rae’s wake.

Some particularly noteworthy sounds and smells are displayed more prominently, or from further away. The PAX demo began with a church bell tolling in the distance, highlighting a sort of goal point to work toward. There were also notable aromas to follow, represented as visible gossamer wisps drawing Rae near.

Even with the ability to paint her immediate surroundings, controlling Rae can be a bit jarring at times. Sometimes she’ll be walking toward a brook, expecting the path to slope downward toward the water, when suddenly a huge stone bridge appears, giving an entirely new shape to the expected landscape. Other times she will be walking along a path with just empty space ahead, only to be stopped abruptly by a house that wasn’t visible two steps before.

More interesting is watching Rae’s perceptions change as she gains new information. Early on in the demo, she interacted with some crows, and she did not like them. She curls up her arms over her body when she gets near things that frighten her, and the crows had that effect. Later on, she nears a chicken enclosure, but from far away she can only tell that there are birds inside of it. She imagines them as giant crows, and doesn’t seem keen on investigating more closely. When she does near the chickens and she realizes what they are, they morph from the smooth black birds to fluffy white ones.

Near the end of the playable section, there was an ominous black cloud. It clearly frightens Rae; it’s loud and messy, but it isn’t immediately obvious what it is. After she cautiously walks to it and interacts with a nearby object, players hear the screeching tires of a braking vehicle and the beeps of a modern crosswalk. The black cloud parts, allowing her safe passage across the street.

Upon reflection, this scene was powerful in a sort of tragic way. We often take for granted something as mundane as crossing a busy street, but for Rae, all she really knew about it was that it was dangerous. She didn’t even have a clear picture in her head of what the street was; all she could tell was that she could be seriously hurt if she came too close to it. 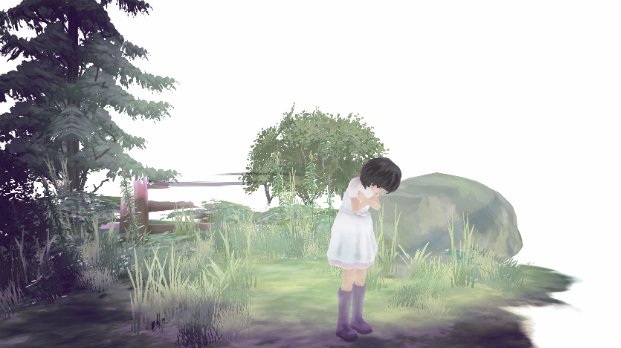 The only real complaint I had with Beyond Eyes was with the controls, and even then I can’t help but think that the issues are deliberate. Directing Rae is sluggish; starting to move from a standstill or changing direction take some time. Her normal walking speed is slow. Similarly, interacting with objects doesn’t always seem to work, and when it does it still takes a bit of time to execute.

Thematically, this could be another representation of Rae’s blindness; she doesn’t know exactly where she is with respect to the environment, so she needs a little bit of extra time to feel it out. Even so, as a player who wanted to paint as much of the world in color as possible, Rae’s slow movement was frustrating, at least in the context of being at an appointment at PAX East and wanting to make sure I got the full experience. Perhaps at home it will be easier to play in a more relaxed state where the overall speed isn’t as much of a bother.

In all, the way Beyond Eyes handles its central conceit is commendable. Though representing blindness through colorful environments seems contradictory at first, it has some clever ideas in using the player’s visual information as an abstraction for Rae’s other senses. A few of these ideas showed up in the short PAX demo, and I am intrigued to see what else can be done with Rae and her painted world.