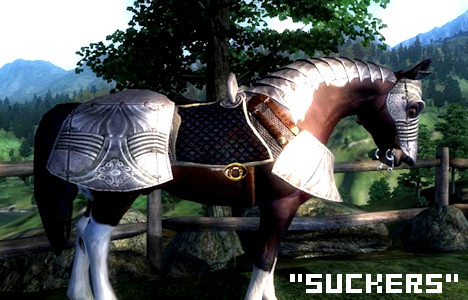 As if you needed any further proof that people are gullible imbeciles who’ll buy anything, look no further than Bethesda. The studio recently released its top ten Oblivion downloads and confirmed that it still sells the infamous “Horse Armor” DLC … daily.

“To this day, 2 years later. Looking at our Xbox Live reports, every day, tens of thousands of people STILL play Oblivion and they purchase thousands and thousands of downloadable content — again, every day,” boasts Bethesda on its blog. “Yes, even Horse Armor continues to sell daily.”

The full list according to the developer is as follows:

*If we rank by pure downloads and include the free promotions we’ve had, Fighter’s Stronghold becomes #1.

It’s somewhat terrifying that, to this day, one of the most useless and pathetic pieces of downloadable content to ever hit a console is still selling every single day. I fully expect Bovine Armor for those two-headed cows to appear in the next Fallout 3 update.