The time has come: Fallout 76 now has a plan throughout the rest of 2020. Wait, where are you going?!

Following the recent Wastelanders update, which massively overhauled the game and added NPCs, Bethesda has finally shared their 2020 roadmap for the game. It’s fairly simple: there’s going to be a summer, fall and winter update (â™«”all you have to do is call”â™«), all of which bring huge changes to the game. Let’s break them all down individually.

Summer will bring seasons into the mix (welcome to literally every other looter shooter on the market), as well as legendary perks, more events and public teams (good). You can check out the “season board” design here, which involves a method for people to “spend Atoms to immediately unlock the next rank.” Yep, it’s a battle pass folks: strap in. This is how they’ll monetize going forward alongside of the subscription fee, though no one can buy ranks the first two weeks of each season. Bethesda says that it will create an “even footing,” but it remains to be seen if they’ll waive that so people can spend more money before the seasonal honeymoon period ends.

Fall is called “One Wasteland for All,” and will “rebalance combat and rewards” for the entire game, allowing players to scour the entire world at will. It’ll also add a new Steel Dawn questline and daily ops that also scale. “Season 2” will also start at this time and new events will be peppered in.

Finally, Fractured Steel is coming in the winter, and will arguably be the biggest update since Wastelanders. Season 3 will kick off, but you’ll be able to customize your perk loadouts/builds, as well as go on repeatable “expedition” missions and build instanced interiors for your C.A.M.P. (base of operations). The Brotherhood of Steel also makes an appearance at this time to usher in the new story arc that builds upon Steel Dawn: more NPCs, quests and companions will be added too.

It stands to reason that all of this was going to be shown during next month’s E3 showcase, but things changed. E3 is not happening this year and Bethesda isn’t running a single stream event. Instead, we’re in the Summer of Hell: where every publisher is jockeying for position to try and peddle individual events and announcements.

Remember, Fallout 76 is free this weekend if you want to try out Wastelanders. 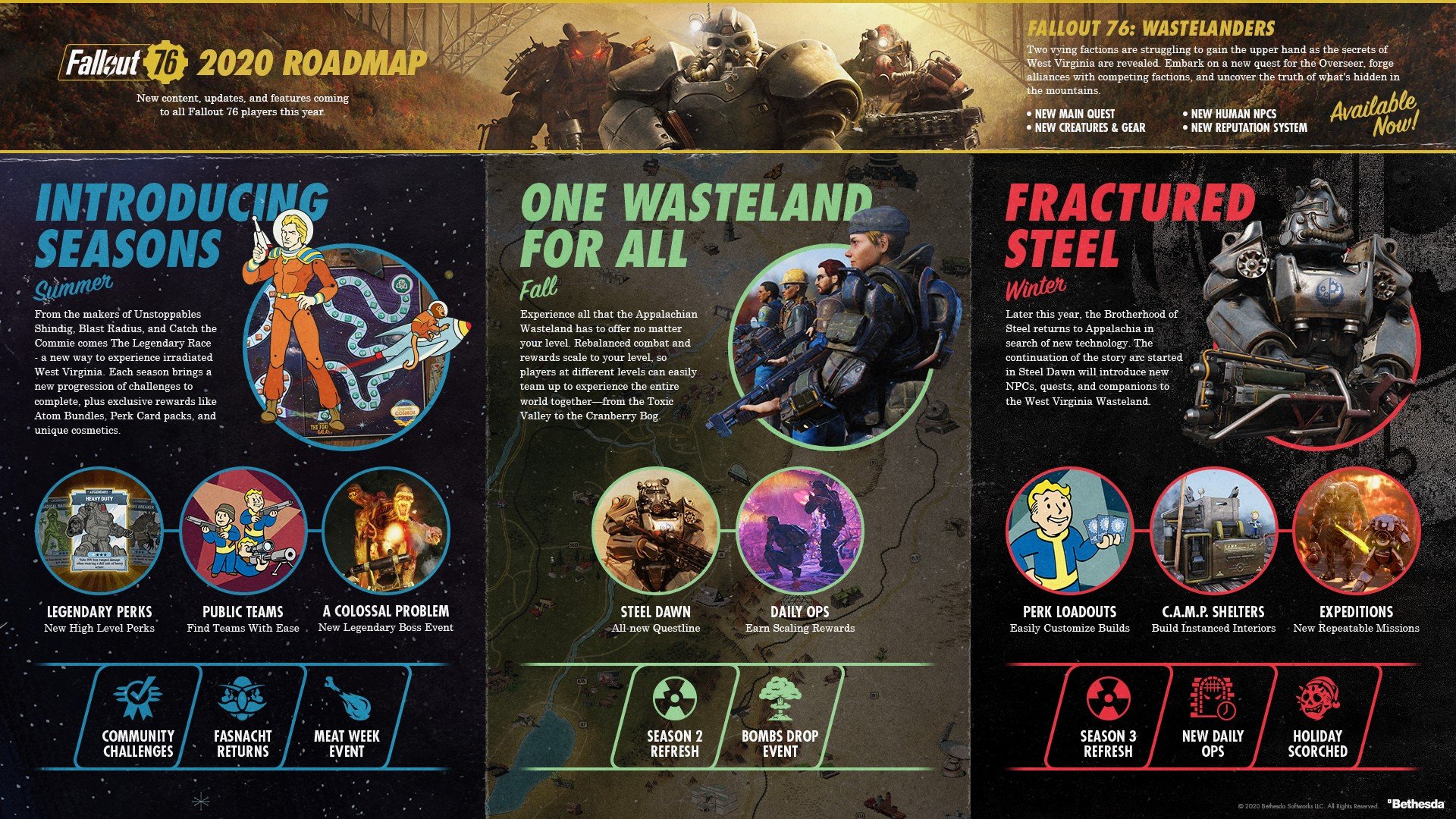