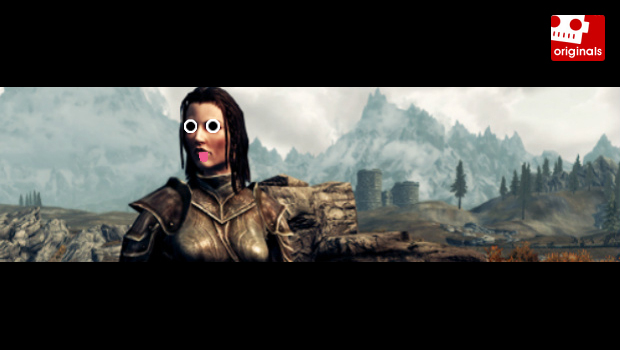 Go to any media outlet this week and they’ll be trumping up their best-of-the-year list. We’re not so different. However, I wanted there to be a place where staff could sound off on what trends, games, and ideas captured their interest (for better or worse) this year.

I asked all the Dtoid staff to provide a mini-rant in the form of a fake award. The results are a bit random. Today, we take a look at the stupidest moment in a game, overlooked gems, and the “best” Skyrim glitch in 2011.

Normally, we complain about videogames’ trying to be too much like movies, but with games’ becoming a bigger medium, we see more and more influences from games in film. That’s not always a good thing. There’s a reason why movies and games are different things, and that reason is because THEY’RE DIFFERENT THINGS.

A perfect example of why this should always be remembered is Sucker Punch, which took the plot and goals of a videogame and stuffed it into a movie. A young, sexually appealing girl enters a series of fantasy worlds where she must defeat a series of “bosses” in order to collect a bunch of weapons to defeat her oppressors (in this case, the mental ward she’s been committed). Basically, this is a movie about a bunch of fetch quests, which can already be boring enough in a game, but when you give Zak Snyder carte blanche, it gets even stupider evidently. Scenes that should be totally awesome are dull because every scene works like a game’s level and not part of a movie. Game plotting is great for games, not for movies.

Andy Dixon’s “Game That’s Still Fun to Play Even with the Sound Off” Award (a.k.a. The “Happy Family” Award)

Gaming in a small house with a sleeping toddler is often an exercise in futility. Paper-thin walls coupled with the close proximity of the “family” room to said child’s bedroom make for poor gaming conditions, and they require a very specific type of game in order to appease all parties. Features such as subtitles/closed captioning, easy jump-in/jump-out gameplay, and the ability to pause at any time become more than just boxes to tick on the back of the box — they become necessities.

For these reasons, Deus Ex: Human Revolution is a family man’s dream come true. You can pause the game in almost every scene, subtitles are enabled by default, and the slow, exploration-heavy pacing means taking a break to soothe a fussy toddler back to sleep won’t throw off your mojo as it would in other games. Above all else, Adam Jensen’s grating voice acting means your experience may actually improve by turning down the volume!

Winner: Pvt. Augustus Cole (a.k.a “Cole Train”) has a midlife crisis and freaks the f*ck out for no real reason in Gears of War 3

While this year was filled with stupid video game moments, from any emergent (and oftentimes hilarious) glitch that has appeared in a Skyrim playthrough to the “press button to stab rat” sequence in Battlefield 3, I feel that the Cole Train’s freak-out moment in Gears 3 is the single stupidest moment in gaming for this year. The biggest issue that comes with this moment, when Cole is revisiting his hometown of Hanover with Baird and Carmine, is that it comes abruptly and ends with no real meaningful ties to the greater Gears story. They decide to take a walk down memory lane through the ol’ Thrashball stadium after meeting up with the Stranded, who are instantly willing to help the old celebrity and his pals, but his sudden flashback is both abrupt and of absolutely no consequence to the rest of the story, despite the fact that his behavior puts pretty much everyone including himself in serious danger.

Nothing else is ever mentioned of this moment, and the bit of backstory it provides is incredibly shallow at best. Gears of War has never been a series about a deep and meaningful story, but at least Dom’s narrative in Gears 2 was created in earnest. Here we have an apocalyptic, end-of-the-world scenario where the Lambent are pretty much destroying every last vestige of humanity that hasn’t already been raped and pillaged by the Locusts, and the attention is suddenly shifted to Cole Train’s mid-life crisis breakdown because — boo hoo — he’s not a celebrity Thrashball star anymore.

Jonathan Holmes’s “Why Did U No Play This Thing!?” Award

This is one of the best games ever. It’s on the iPhone, iPod Touch, and iPad, three things that many humans own. Yet, while more copies of Angry Birds have sold than there are people in the United States, Sword & Sworcery fails to become a commercial blockbuster. C’mon people! Don’t you like evading death anymore? What about three-eyed wolves or naked bear men? How about games where you don’t find out that the main character is a woman until someone tells you? Are you too cool for that now, with your rainbow parties and your Hot Pockets and your Glee 3D movie sing-a-longs?

In closing, Sword & Sworcery is better than all of Destructoid’s official GOTY nominees, except maybe Portal 2, but probably not.

Japanator’s “PSP JRPG You Should Have Played but Probably Didn’t Even Hear About Because HAHA PSP JRPGs, Am I Right?” Award

Winner: Legend of Heroes: Trails in the Sky

Japanator reviews editor Hiroko Yamamura says, “Trails was truly the surprise of the year for me. I took a quick glance at the semi-generic looking anime box art and dismissed it for another JRPG snooze fest. Countless fun-filled hours later, you could say that I kind of fell in love. The title shows some of its age, as it is a port of a 2004 PC game, but those shortcomings become distant memories after just an hour or so of play. What you do take away is an addictive, funny, and dramatic storyline filled with some really memorable characters. In year that had some real JRPG snoozers, it would be a crime to sleep on this PSP gem.”

It might not be as epic as flying mammoths or dragons getting stuck in reverse, but the crazy antics of the residents of Skyrim are a constant reminder of just how buggy yet somehow delightful Skyrim can be. Frustrating as well, oh so very frustrating. Technically I’m cheating, since a plethora of bugs and design flaws went towards making these wonderful buffoons. Followers are, of course, the worst of the bunch. Vanishing without a trace, getting lost on mountains, knocking everything over in your meticulously ordered home, standing on every single trap over and over again. God, they are awful. Yet still, I let them follow me around, but for every NPC that gets stuck or attacks for no reason, there’s another with a pot on their head and a shop that’s ripe for burglary. So it all works out.

More than any other year in recent memory, 2011 seems to be full of promising Japanese games that have been ignored the West. And — surprise, surprise — they are mostly for Nintendo platforms. Xenoblade was a shoe-in for this award until the recent U.S. release announcement, which makes me want to draw attention to a different game that has been completely ignored. In fact, most of the series has been ignored in the West. I’m talking about Puyo Puyo, one of the oldest and best arcade puzzle games. Puyo Puyo!! 20th Anniversary is an absolute gem that brings together almost every mode and character that ever graced the series into one giant package. I can’t put it down. I wish other Westerners could experience this joyous time-suck of a game.