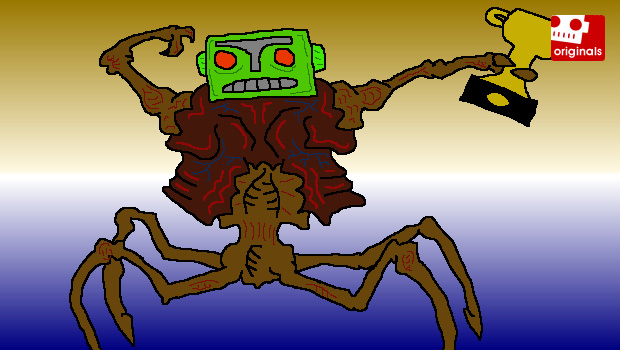 Go to any media outlet this week and they’ll be trumping up their best-of-the-year list. We’re not so different. However, I wanted there to be a place where staff could sound off on what trends, games, and ideas captured their interest (for better or worse) this year.

I asked all the Dtoid staff to provide a mini-rant in the form of a fake award. The results are a bit random. Today, we take a look at PC hardware, season passes, and stupendously stupid game names in 2011.

Alex Bout’s “If I Could Pick One Piece That Would Most Affect Gaming Aspects of a Computer, I Would Pick This” Award

I chose the 6950 over the i5 and M4 because of its contributions to gaming performance. While it is unfair to compare the advantages of a video card to a hard drive or CPU, it is undeniable that video cards improve game play the most out of all the other components of a computer. Don’t get me wrong, both the i5 and M4 are excellent pieces and shouldn’t be discredited as unworthy to buy.

There were several different comparisons I made while choosing the 6950 2GB as my choice: for one, the Radeon 6950 (1GB or 2GB) offers excellent performance for the price. The GTX 560 Ti, the Radeon HD 6950’s closest competitor, is about the same price despite the 6950’s having slightly better performance. Moving on, I chose the 2GB model because it will offer a greater advantage later on as technology advances. The 2GB will not only help at higher resolutions such as 1900×1200 and multi-displays, it will also aid in future game, as they begin to take advantage of the increased amount of memory.

Aside from “The” and “of,” the only actual word in this game’s title is “Knell” which I had to look up. It means the solemn ringing of a bell. “Ar” is the chemical abbreviation of Argon, and “Ciel” is a brand of bottled water only sold in Mexico, Morocco, and Angola. So basically, this game’s title is 13 syllables of utter gibberish. If you approached a family member and said, “I want to play Ar Tonelico Qoga: The Knell of Ar Ciel,” they would probably think you had a stroke mid-sentence or are possibly possessed by a Satan. I don’t care if the game itself is good; the fact that someone decided this was a good name for a product that is sold in stores should be fired and possibly jailed.

Hamza Aziz’s “What the F*ck Were They Thinking?!” Award

You’re going to release Rayman Origins during the Novembergaddeon of AAA games? Worst of all, you’re releasing Rayman Origins the SAME DAY as Assassin’s Creed: Revelations? So not only are you competing with other publishers, you’re competing with yourselves! Rayman does’t have the brand power like it used to, and it feels like it was basically left to drown at retail. Oh, and let’s not forget this gem where the sales of Rayman Origins will have an affect on Beyond Good & Evil 2.

Runner-ups: The 3DS launch, GoldenEye: Reloaded getting released between the launches of Battlefield 3 and Modern Warfare 3, Konami not promoting ANY of their releases (No More Heroes: Heroes Paradise, Frogger 3D, LeedMees, Metal Gear Solid Collection, Otomedius — probably more that I can’t remember due to lack of promotions), EA/Sony/Microsoft preventing consumer rights with their “you can’t sue us anymore, haha” terms, the PlayStation Vita’s overpriced memory cards, a Tetris subscription fee

City of Heroes came out way back in 2004, a few months before World of Warcraft dropped and took the world by storm. That’s when my hero, P-Dude (pictured above), was born. It’s been seven years since then, and I still find myself enjoying the wide breadth of things to do within the MMO with not only P-Dude but my other characters like Grandmaster Pain, Squirtle, and Sweet Mustache as well. This game is something that Champions Online tried to surpass but ended up only half-emulating. DC Universe Online has the star power, sure, but once you look past that, you may be left wanting more. Now that it’s officially free-to-play, anyone can experience the extreme customization options of not only your appearance but your superpowers as well. In the end, I have to give credit where credit is due and give this award to the original superhero MMO, City of Heroes. Always emulated, never duplicated.

I know my choice will surprise most of you, but let me explain why I think that Sideway was the best impulse buy I made on Steam this year. Whilst the runner-ups may be better games, Sideway was the only game I bought this year on a true impulse. I saw it pop up on Steam, watched the trailer, and just bought it. Then I played it and stuck with it all the way to completing it, then I went back and played it again. I didn’t even do that with any AAA games this year. With it’s lovely graphics, smart gameplay, and the hook of those hidden tags, I’m still playing Sideway; that’s why it’s the most rewarding impulse buy I made on Steam this year. Oh, and it has nothing to do with my currently being in the top 10 leaderboard!

Dark Souls is a great if slightly flawed game. Blighttown manages to encapsulate everything wrong with Dark Souls. The camera is constantly being obscured, phasing through wooden walkways, whilst the frame rate grinds to a halt. Enemies can very quickly inflict severe status effects on the player, which can only be cured by items that cannot be found anywhere in Blighttown. Once the player manages to find their way to the bottom, they are confronted with another obstacle, a giant poisonous swamp which is almost impossible to cross without being poisoned. However, the best part of Blighttown is the little flying insects that constantly respawn. The bugs love nothing more than to do their best Cliff Racer impression and hover above you just out of range. When you finally do kill them, they don’t drop any experience. Naturally, they do poison attacks.

In this console generation, we’ve seen the advent of downloadable content to expand the on-disc experience and maintain mind share… and of course, to get you to spend more money than the original $60 cost. In 2011, publishers went further when they came up with the “Season Pass,” a one-time, discounted fee that would get you some or all of the upcoming DLC for one game. If you’re already planning on picking up the extra stuff, you might as well save some coin while you’re at it, right? Then again, you’ve paid $60 and are now pre-ordering additional content, sometimes for as much as that initial sticker price.

Sometimes, it’s a great deal. Sometimes, it doesn’t get you all that much. It’s probably too early to judge these passes when we don’t know what all of the content will look like, but if people are being asked to pay for it upfront then it’s only fair, isn’t it?

Each L.A. Noire case was a meaty piece of content, ranging from 45 to 90 minutes in length. If you dug the game, paying 10 bucks (a 50% discount) for four new cases was a no-brainer. The same goes for Elite — if you’re sure you’ll buy every new Modern Warfare 3 map pack at $15 a pop, you’re probably a hardcore enough player to also want the additional in-depth content that Elite offers.

Damn, a whole 15 percent off? This season pass nets you one currently available DLC pack (with two vehicles and two outfits, wowee!) and three future missions. Oh, and it doesn’t even include two other launch DLC packs, one of which just contains… cheat codes. THQ, your shamelessness knows no bounds. (I tried to come up with a runner-up, but really, none of the others were as bad as this.)