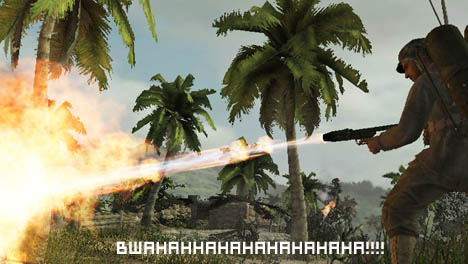 I had to do a double take after entering the room at a recent Activision preview event. I looked at the screen from a couch I sat on, looked back at the player who seemed to be controlling the action, and then looked again at the screen and the console beside it. Wii? If so, that’s a great looking Wii game, I thought. It actually took me walking up to the screen (about 6 ft away) to see that it was indeed a Wii game.

Running on the Call of Duty 4 engine, it’s no surprise that World at War looks great, but we’ve really been wondering about how the whole thing works with the Wii Remote this time around. Would it be like Call of Duty 3 on the Wii? And what’s with this Wii Zapper support? And “squadmates?”

Much like you’d expect, the Wii Remote aims and fires, and the Nunchuck moves your character in Call of Duty: World at War.  I’ll say right off that I never felt like I was turning from side to side fast enough, but it may have been a settings issue, and for the most part, I was facing the direction I needed to face. Other than that, the controls were more precise than I expected. We have the vertical line of sight auto-adjusting

“Combat-Look” technology to thank for that. There was also a Wii Zapper control scheme that I did not get to try as the primary player, but I did get to try as a squadmate. More on that later.

You’re back in World War II again, but this time Kiefer Sutherland (or Gary Oldman, depending on what side you play as) is whispering commands into your ear as you get tangled up in the Pacific.

As we said before, World at War is a looker on the Wii. The first battlefield I played on seemed very vast, and there were several on-screen objects like huts, logs, and bunkers to keep your eyeballs entertained. There were a few instances of being crouched right up on a bush and seeing some pretty blocky looking images, but for the most part, the game is pleasing to the eye. In another level, I ran along a brook under a canopy of trees. Seeing light poke in through the branches was impressive. I was equally impressed seeing water ripple from a nearby explosion.

The new “squadmate” mode lets another player be your spotter. Armed with a Wii Zapper, your squadmate can pick off enemies while you do all the hard work. Some staff there likened it to a Super Mario Galaxy type situation, but I think it’s closer to being Tails, trailing behind Sonic in Sonic The Hedgehog 2. While the squadmate can shoot and aim, they have no control over where they want to go. Even picking up ammo and weapons is out of reach; squadmates have to ask the main player to stand over weapons and let them pick it up. If nothing else, it makes for a fun add-on that anyone can jump in and play at any time. CoD:WaW also supports full-on WiFi multiplayer, but we did not get a chance to try that out.

Of course, I couldn’t wrap this up without saying something about the flame thrower. It’s badass, just as you’d expect. It’s the perfect weapon for someone who sucks at shooters and fails to watch out. Just hose them down with fire as they come after you. It’s also a thrill to finally make your way up to a shelter where some enemy has been picking at you for awhile. Simply run up and burn them out, laughing in a pyromanical craze. And it has to be said that the fire effects are visually stunning.

The Wii version of Call of Duty: World at War may not have the beauty and depth that the Xbox 360 and PS3 versions do [more on those next week!], but it definitely stands on its own as a great looking and playing title. Treyarch has stepped it up and made a serious Wii title that deserves the attention of Wii-owning shooter fans.