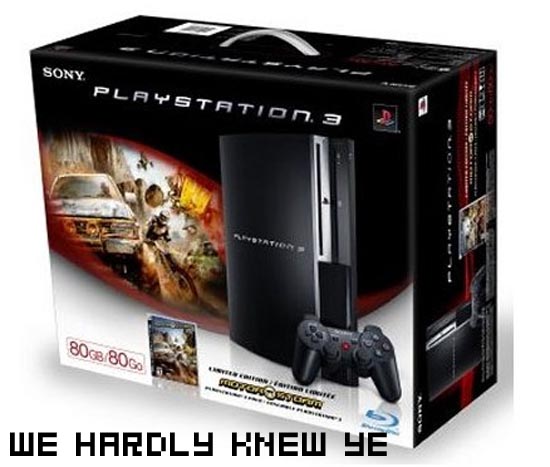 Sony has been putting a lot of focus on it’s 40GB PS3 model lately, discontinuing the 20 and 60 GB models in Japan within the last couple weeks and thus sparking the fear among Western gamers that a similar move will soon be made in the states.  It appears our fears may be realized sooner than we thought.

A scan of an internal document, supposedly made by a Best Buy employee, surfaced today stating that Best Buy will no longer be carrying the 80GB version of the PS3 as of January 28th, and assumes that 60GB models will be cleared from the store by that time as well.  Leaving only the crippled 40GB model to be sold in stores.

Far be it from me to jump headlong into the thick wilderness of rumorland, I decided to see what confirmation I could get for myself.  A brief call to one of my local Best Buy’s confirmed my suspicions.  A sales rep (who probably realized his mistake about two seconds too late) informed me Best Buy will no longer be receiving 80GB PS3 models and will not be taking any reservations for the stock they currently have.   The salesperson did not however, confirm a specific date at which they would cease carrying 80GB models.

Remember that 40GB models of the PS3 have only two usb ports, no memory card readers, and most importantly no backwards compatibility.  So while this rumor is only half confirmed for the time being, anyone holding out on picking up a PS3 that also has a feature considered a standard by most, would be advised to go pick one up, soon.