For anyone familiar with the Xbox 360 iteration of Tropico 3, you will most certainly find yourself on familiar grounds with the sequel. During the Kalypso Summer Event at the San Francisco Bay Aquarium, I had a chance to check out the Xbox 360 version of Tropico 4 and compare and contrast it to the PC version on hand.

I’ll start with a statement that may be obvious as I’ve admitted as much in earlier previews: I’ve never actually played Tropico 3. I’ve read many different articles/reviews and listened to a few various podcasts around the web that have discussed the game in detail, but I just couldn’t get into the idea of a strategy sim game. The last game of this sort of genre I’ve ever played was Sim City 2000, and the most I’d ever do in that game is build a crude infrastructure, get a city started, and then ATTACK WITH TORNADOES, EARTHQUAKES AND ALIENS. I guess I’ve always been too ADHD to deal with a long stretch of a sim game.  I want to blow sh*t up, and I want instant gratification.

In other words, sitting down to Tropico 4, I figured I’d get bored within the first five minutes and maybe try to hand the game off to another previews editor. However, as soon as I became familiar with the general workings of the game, I found myself getting more and more immersed in the gameplay, which came at me surprisingly faster than I expected.

You see, in Tropico 4, just like in it’s predecessor, you start off the game as a dictator of some sort with total rule over an island and a limited supply of resources to use as you wish to either see the productive advancement of the island and it’s people or the total destruction of it and your dismissal as ruler. However, just as in the real world, it seems that every problem that you solve opens up several other new paths/decisions that may completely alter the socioeconomic face of your whole island. 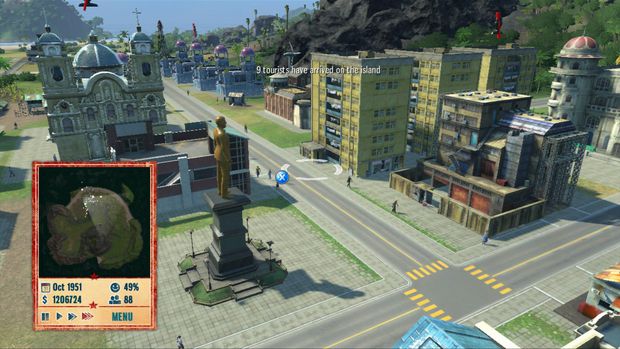 For example, during one of my play sessions I decided to get money quickly by forging a deal with an overseas baron to mine for iron throughout my island.  I began to industriously build mines at resource-heavy locations.  Eventually, I had enough mines to really start raking in the dough, as I was exporting iron left and right.  However, this wasn’t enough for the baron and he brought forth a further deal to start mining for some other mineral, whether it be bauxite salt or gold.  I unintelligently went with gold, and pretty soon I was scrambling to find suitable sites to mine, which caused me to build roads leading out to the furthest edges of my island and caused a huge delay in getting enough workers to come work for me.

Meanwhile, my villagers were becoming increasingly unhappy at the shantytowns I had left for them instead of actual housing developments, and many of them were getting sick with some sort of iron disease. I needed to build clinics and actual tenements, and so I set to work doing just that.

In a matter of minutes, an earthquake struck my island and in a turn that closely resembled some relatively current events, a bunch of miners got trapped in a cave-in in one of my many mines.  Several of my newly built tenements were also destroyed and general havoc had been wreaked. 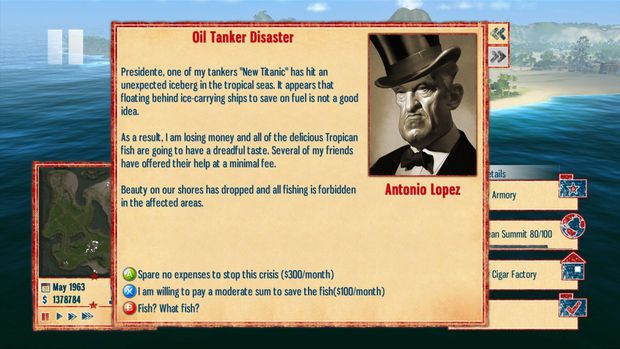 In other words, I was back to having very little money and a lot of hate from the villagers. A prompt popped up on my screen from a Chinese dictator, offering relief for the cave-in via expensive tunneling device that would put me further in debt.  With no hope, I decided to accept the offer and found my resources going into the negatives for awhile.

Eventually after creating a hot tourist spot miles away from the mines with balloon rides over an ancient ruin, I was able to start gaining money and the trust of my villagers back. I knew my little villagers finally trusted me because I was able to bring the camera close to any one of them that I chose and read through their stats such as happiness, respect, and hunger.

This particular playthrough ended after election season came up. I gave a rousing speech in which I promised more houses and also gave a little (or large) nudge to Communism as a winning ideology. I won the election, and I decided this was a good time to hand the controller off to others who were waiting near me to get a playthrough. 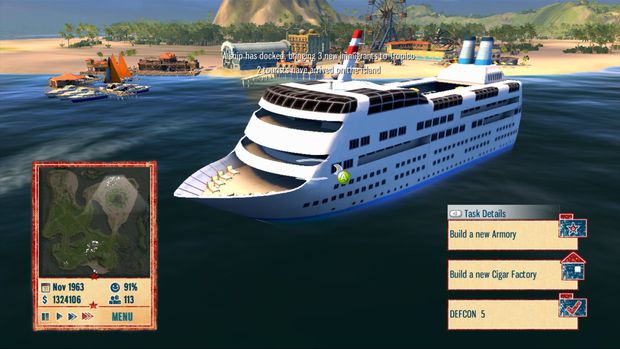 After playing a bit of the PC version as well, I found that the main differences between the two versions is that the Xbox 360 version has great intuitive camera control but can be pretty imprecise with choosing specific villagers or buildings. It also suffers from a graphics downgrade which is to be expected, though the game’s graphics are generally not the biggest selling point anyhow, so most gamers may not even care about just how sharp their lumpy and vaguely defined mountains may look.

Overall, I believe the Xbox 360 version of Tropico 4 is shaping up to be a fun, if sometimes hectic strategy/god (er, dictator) game that treads on familiar territory while adding in a few new twists to keep up the interest. If you’ve played the earlier game, you’ll find a lot to like in this sequel and even if you haven’t, it’s definitely worth a look and possibly may even bring you to hand over a bit of your hard-earned dough.