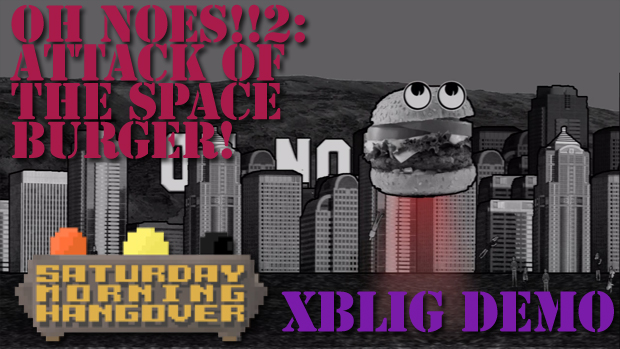 Oh Noes!!2 charmed the hell out of us on Saturday Morning Hangover

Each week on Saturday Morning Hangover, we perform the public service of playing through the demos of new releases on Xbox Live Indie Games. While it’s probably charitable to call the service “hit or miss” in terms of the content, it is something of a breeding ground for weird and amazing stuff.

The absolute best game we played this week was Oh Noes!!2: Attack of the Space Burger. You control a flying burger (presumably from space) which sucks up humans from the ground and uses them to fuel destructive “blood lust” powers which let you carpet bomb with gherkins, gain temporary invulnerability or expunge collected humans in a shower of bodies and gore. Oh, and you have a gun too but I clearly didn’t figure that out until nearly the end of the demo when I was forced to face a dolphin defender of the planet.

Go grab the demo and see for yourself. If you don’t think this is worth dropping a buck on just to see how weird it can get, we have very different priorities in life.