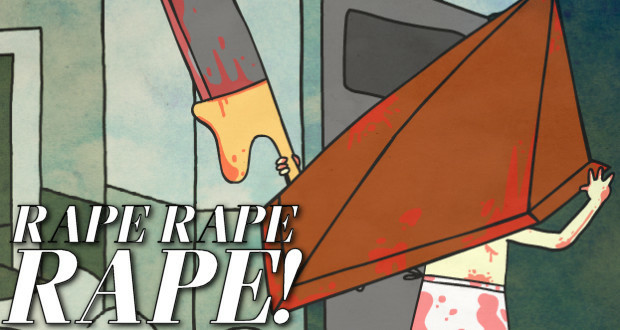 I made one of those Once Upon a Pixel things again. It premiered last Monday, but if you haven’t seen it yet, I’ve got a link right here. You might like it! It’s on Silent Hill 2.

If you have watched it, you may be interested in how it came to be. You’re in luck! I’ve also made one of those Once Upon a Pixel retrospective thingies again. You can read it by hitting the jump link below. Unfortunately, there aren’t as many pretty pictures to look at this time around, but there is a lot of work-in-progress material to give you a better idea of how things come together during production of one of these episodes. 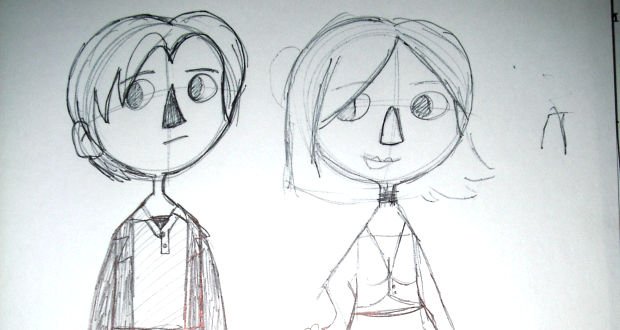 All I knew at the beginning was that I wanted to make something drastically different from the existing episodes. As much as people love the still images and fairy tale bit (and there will be more episodes of the ilk scattered here and there in the future, I promise!), I want to keep people guessing what will come next. Really, no one could have possibly seen a sitcom based on Silent Hill 2 coming.

As I ran through game titles in my head while brainstorming, I made a funny discovery. The name “Silent Hill” sounded a lot like the setting of a WB drama, a-la Dawson’s Creek or One Tree Hill. It led to mental images of James Sunderland as a brooding, angsty teenager trying to fit in at Silent Hill, which would still be inhabited by crazy people, monsters and Pyramid Head. It took me back back to days where me and my sisters would use Spiderman Cartoon Maker to create spoofs of 7th Heaven or whatever other shows were on at the time.

I shared the drama show idea with Anthony and at some point, we decided against it because it would be a little too far removed from the original Silent Hill 2 story. The game didn’t allow for as much room for interpretation as something like Katamari did. But the groundwork was laid to produce a television program of some sort, and with a seemingly innocent statement, the wheels began to turn: 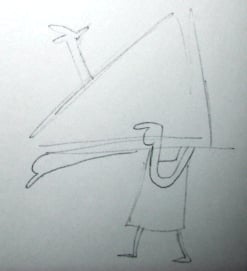 “Wouldn’t it be funny if Pyramid Head were like Kramer?”

The answer to this question was, of course, a resounding “yes”. The Internet had already done a thorough job of turning the creepy monster into the posterboy of the hilarity of rapists, so why not crank the idea up to 11?

Like with the Bioshock episode, Burch was entirely responsible for the script because I have never finished Silent Hill 2. It was actually pretty fitting for me to turn a survival horror game into a comedy; one is something I don’t normally dig while the other is the epitome of what I dig. I love comedy, and old sitcoms have always had a special, squishy place in my heart, despite the fact that they were almost never truly funny. 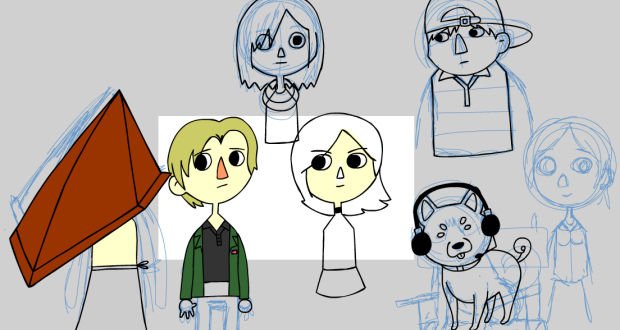 Up to this point, I had done nothing but still image episodes, but sitcom Silent Hill 2 wouldn’t have been done justice by them. This one just had to move or it wouldn’t work. My one regret is that I wish I could have used live action instead of animation, but seeing as how everyone I know has appeared in HAWP at some point or another (we have to keep them as separate from one another as possible), I had to go with the latter choice. It was a huge gamble and thankfully, it came to be something both Anthony and myself were extremely proud of.

But it could have really gone the other way. See, I have dabbled in Flash for many years, even going so far as to make an unfinished pilot for an animated version of the Flora and Fauna series, but nothing complete had ever come of it. I learned a lot while making this episode, but I openly admit that I’m still extremely uneducated on how animation and Flash works.

James and Maria started as sketches on paper, and the designs of the other characters were tweaked from their bodies. The legs of most characters were split into upper, lower, and knee sections to make walking and running easier, while the upper limbs were animated on the fly. I took a page out of Home Movies‘ book and kept movement to its bare minimums. I wanted all these little details, such as Nurse monsters “working” in the background of the hospital scene, but I had to force myself to keep things simple for the sake of my sanity and to polish every part of the cartoon that mattered first. Thus the characters’ original huge, pupiled eyes became easier-to-animate dots, and so on.

I also tried to be a legit animator by storyboarding the entire episode, but I only got one scene done before dropping it to just work on the thing itself: 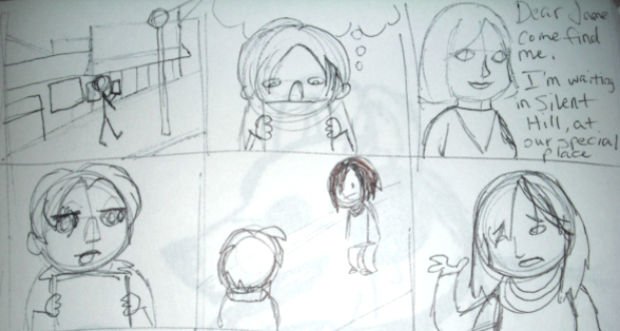 Drawing the still images of Silent Hill’s scenery was a more familiar experience. I went through screen shots and videos to try and pin down things to the last detail, from Pet World to Eddie’s portion of the Labyrinth. Some unused backgrounds can be seen in the gallery below; they’re mostly outside shots of the areas the show takes place in. You know how TV shows cut to a shot of the outside of the house/building/area before going to the next scene that takes place inside of it? We were originally going to do that with the hospital and hotel scenes, but these were cut in order to keep the episode from dragging.

I kinda wish we would have kept that in, though. In addition to being true to the game, I also wanted this episode to be true to its television roots. The theme song was pulled from Growing Pains (other potential choices were Newhart and My Brother and Me), the title font (Christie) was based off of the Family Ties font, there was a nod toward Miller and Boyette (creators of such programs as Full House, Family Matters and Step by Step), and all the interim music and laugh tracks came from episodes of Seinfeld, Fresh Prince and a few other choice sitcoms. But the icing on the cake was the Dog Productions card. 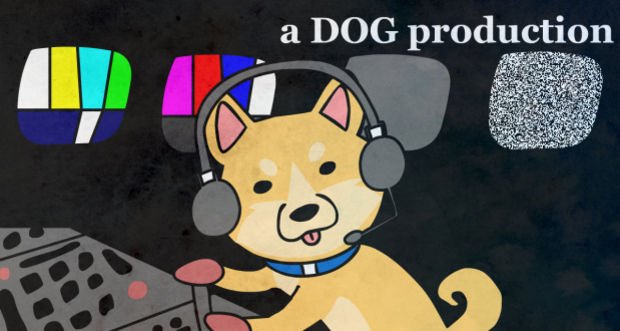 The secret Dog Ending of Silent Hill 2 was one of the first things to come to mind after deciding to fit the game’s story into a sitcom format. There could have never been a more perfect link made between the game and the world of television; it was almost as if the creators knew that one day, someone would come along and make a TV parody of their game. The Dog Productions card served as both an homage to one of the strangest secret endings in the history of games and the classic production card of TV company Ubu Productions.

As for the aftermath, people seemed to be pretty divided as to whether or not they liked this episode, which is fine. I understand that not everyone shares the sense of humor that we have over on the production side of things, but I was very happy to see at least half of the response was very positive. Maybe the audience over at Gametrailers is a bit too young to remember the days when television shows of this ilk dominated the airwaves. Today, we have more genuinely entertaining programs (such as 30 Rock and How I Met Your Mother) than ever, so perhaps the mocking of the quintessential sitcoms of decades past was lost on some people.

But whether or not you got as much laughs as the next person, if you watched the episode, thank you. 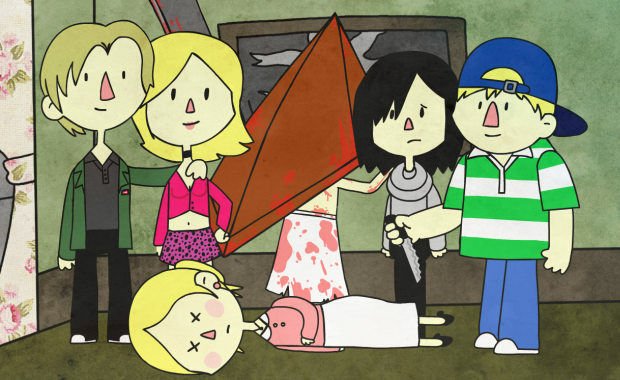 As a final note, I just want to say that I never want any episode of Once Upon a Pixel to discredit any part of the game it portrays. Though nothing is sacred in the eyes of parody/whatever the hell it is I do, I have the utmost respect for videogames and I personally believe they trump all other forms of media when it comes to storytelling.

Along the same lines, comments like “now I don’t have to play the game!” kind of worry me, because OUP isn’t supposed to be a substitute for playing something. Rather, I like to think they show how lame (in comparison) some of the best games ever made would be if they were not games.

If anything, I want OUP to influence people to try out games that they may not have thought about trying before, because that’s what working on the series does for me. I have Anthony on board not only because he is a great writer and editor, but also because he allows me to cover games that are foreign to me. As I adapt what he writes for me, I have to do a lot of research to ensure that I get it right, and the more I learn, the more I want to experience it for myself.

When time permits me to, I’m going to dive right in to Silent Hill 2, a game that I would have never played previously. I hope that maybe, somewhere out there, I’ve inspired someone else to do the same. And if so, I apologize for the fact that it had to involve a sprinkling of spoilers.