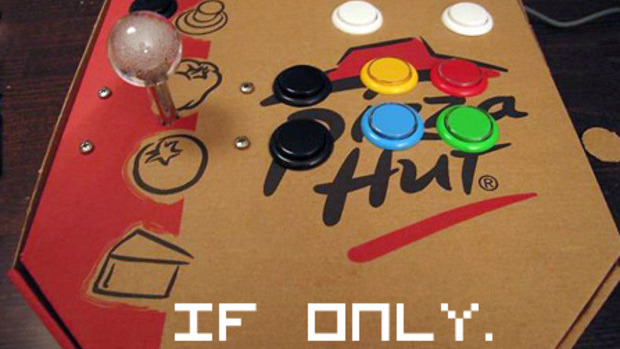 [Nekobun writes about pizza. Oh, you need another reason to read it? Well, it’s also a loving look at some retro classics, and there’s also pizza. As always, remember to load your own bloggers wanted responses into the Community Blogs and tag them with the “Bloggers Wanted Essay Response” tag, and you may see your blog promoted to the front page. – Kauza]

I’ve told the tale before of my first gaming console, wherein I got an NES for Christmas at a tender age, somehow managed to set it up properly myself, et cetera and so forth. However, that’s not where my button-mashing adventures began. The roots of my addiction reach back a bit further, but are less associated with a time as they are a food.

As far back as I can recall, almost all of my early encounters with arcade cabinets were directly connected to that irresistable wonder drug of the culinary realm: pizza.

It’s been long enough that my memories of some of the specifics are kind of fuzzy, but I still distinctly recall one of the first places I ever invested great amounts of time and my parents’ quarters in was a two-game machine featuring Duck Hunt and Hogan’s Alley. For all I know, it was just an actual NES in there hooked up to the cabinet’s monitor, since the Zapper chained to the front was the exact same as the one that came with the retail system.

Neither my mother or father were particularly bothered by how I was drawn to shooting games at the impressionable age of four years, so they’d give me a dollar’s worth of change to have at ducks and gallery targets every time we went to the local Pizza Hut. For a brief period, I was even decent at the can-shooting minigame in Hogan’s Alley, something I’ve never gotten better at as I’ve aged.

While those occasional Pizza Hut trips were my first taste of real gaming, plenty of other early experiences were tied to that delicious turtle chow as well. My initiation into the old school of arcade games came not from a stand-up cab of the inimitable Space Invaders or one of many other first-wave classics, but rather, a tabletop-style Centipede machine. A gleaming treasure tucked into the corner of an Italian place not far from Ocean Spray’s sprawling cranberry bogs in Masachusetts, to which my brother and I’d been dragged for “family time” with my mother’s parents, my new, trackballed friend did not receive much approval from my grandparents as I kept sneaking away from the table. Seeing as how we’d later become estranged more officially later on down the line, while Centipede and its little brother Millipede have stayed with me and in dear places in my heart, I’d say in retrospect that I made the right choice that night.

To add a little bit of context, pizza was not quite as ubiquitous as it is today during my early gaming days, so pizza night was kind of a special occasion. My family wasn’t exactly well-to-do in the first place, and while Pizza Hut was fairly established, Domino’s was gaining ground across the country, and there were little local places in every little town, delivery was a lot less common than it was today, so pick-up or eating in were your main options. Despite this, pizza was still the weapon of choice for keeping hungry kids in line at birthday parties, even at the local roller rink and bowling alley. Both locations were also equipped with reasonably respectable arcades, which kept slices and joysticks intertwined in my life even as I became more of a console (and handheld, with the advent of the Game Boy) kid.

In the case of the roller rink, skating was fun and all, and I was decent at it for a brief period, but it was the wall and a half of arcade games where you could usually find me by the end of things. Be it a birthday event or a school field trip, this was where I could get my fill of mozzarella and Mario Bros., red sauce and Rampage… there’s really no pizza-related thing for UN Squadron, but they had that, too. Donkey Kong, Donkey Kong, Jr, and Popeye were all in attendance, and there was plenty of military representation in the form of Contra, Ikari Warriors, Rush’n Attack, and Jackal. I daresay the spread there, when it came to variety and age range of the games one could play, rivaled many of the arcades I’d frequent later on in life.

The bowling alley’s arcade offerings were much more modest, though their pizza was surprisingly good, and always hot and fresh given it was made at the bar/restaurant adjacent to the lanes. In fact, until I’d graduated from the days of six-pound balls and bumper bowling, all they really had was a trackball bowling game (seems a little redundant, and I think they still have it in their expanded, updated arcade to this day) and some pinball machines.

Thankfully, some visionary had the foresight to bring in a Teenage Mutant Ninja Turtles cabinet around the time my friends and I were all turning seven and eight years old, and it changed many of our lives. Between four-player co-op and the fact it was leaps and bounds above the TMNT-branded NES game actually upset some parents due to how many of us spent more time on the game than on the bowling lanes (until, of course, they realized a few bucks for the change machine was saving them the cost of around twenty of what usually ended up being forty frames’ worth of bowling).

Finally given a little love, that arcade continued to slowly grow and blossom. It saddens me a bit that by the time they brought in Capcom’s Cadillacs & Dinosaurs, most of us were stumbling into puberty and becoming more familiar with the two relatviely local shopping malls, so most of my friends and I had moved on.

Returns in recent years to the same bowling alley have shown they went so far as to renovate and expand the arcade offerings; what used to be practically be just a walk-in closet was moved over to the other side of the building and given a good fourth of the space under their roof. It’s gone mostly the way of ticket-dispensing fairground games, but there are still a handful of more legitimate things to play, including a Pump It Up setup and a cabinet loaded with a bunch of classic Taito games.

Parties at home even had a habit of combining gaming and pizza, albeit a tendency for those pizzas to be frozen and from the grocery store before getting slightly overcooked in the oven and devoured by my friends and I.

One year in particular, my fifteenth birthday happened to fall just a few months after the release of the Nintendo 64, and on the same weekend my favorite Philadelphia alternative radio station at the time was broadcasting a huge farewell concert before they were to change formats to generic hip-hop. My parents conceded to renting an N64 from Blockbuster (since I somehow managed to get every Nintendo console as a Christmas gift the year followingthat system’s release, and therefore wouldn’t see my own until that December), along with Super Mario 64, Wave Race 64, and [/i]1080 Snowboarding[/i], and five of us spent the night noshing on Ellio’s, failing to spin the controller’s analog stick enough times before faceplanting in the snow, and at one point, finding great humor in hitting me in the balls with a shoe. It’s cool, even I was laughing despite the pain, since it was mostly an accident.

Even though I’ve mostly had to move on from your standard pizza, given a dietary shift toward the vegan end of the spectrum, it’s nice to have a constant reminder of delicious times, game discovery times, and good times in general thanks to the endless rereleases and reinterpretations of the games I got hooked on while helping kill many a pie. I shudder to think what may have happened if my parents had been more intent on exposing me to, say, take-out Chinese, drive-thru fast food (which I got my fill of anyway), or had the resources to subject me to more refined (and arcade-game-free) cuisine.