Before We Leave is a winning concept for a peaceful city-building game. It’s a relaxing take on games like Anno and A Kingdom for Keflings in which you’ll harvest resources from a lost civilization, explore and expand to neighboring islands, establish trade networks, and eventually fly off to other planets.

I was into the pitch when we learned about Before We Leave last year, and I’m still into it now, in 2020, after spending a couple of hours with an alpha build. Time flew the heck by while I was playing this.

The trailer is worth watching if you missed the announcement – it captures the experience well.

In the beginning, you’ll have just a few humble “peeps” who have left a bunker to start life anew above ground. It’s not entirely clear what happened, but something happened long ago. There are remnants – bombed-out skyscrapers, broken-down automatons – but the only signs of life are you and the trees.

You’ll plop down roads, wells, farms, and houses on a hexagonal tile-based planet, and the peeps will get cracking. Before We Leave handles much of the minutia with minimal fuss. Your job is more about smartly positioning buildings to gain bonuses (like placing a field near a well), keeping your subservient citizens well-fed and motivated, and checking supply lines so materials get where they need to go.

In other words, early on, it’s less about micro-management and more about the simple pleasure of expansion. I adore that laid-back approach. It’s fun to build knowing there aren’t any rival factions to wipe you out. That said, it’s possible to overextend yourself if you don’t grow your town in moderation.

Given that this was a preview build and my save file isn’t going on my permanent record (remember when we used to worry about permanent records?), I went a little overboard. You’ll reach a point in the game where you can sail wooden ships to establish towns on new islands and then ferry particular resources around, similar to the Anno series. It’s here that my empire started to get away from me. 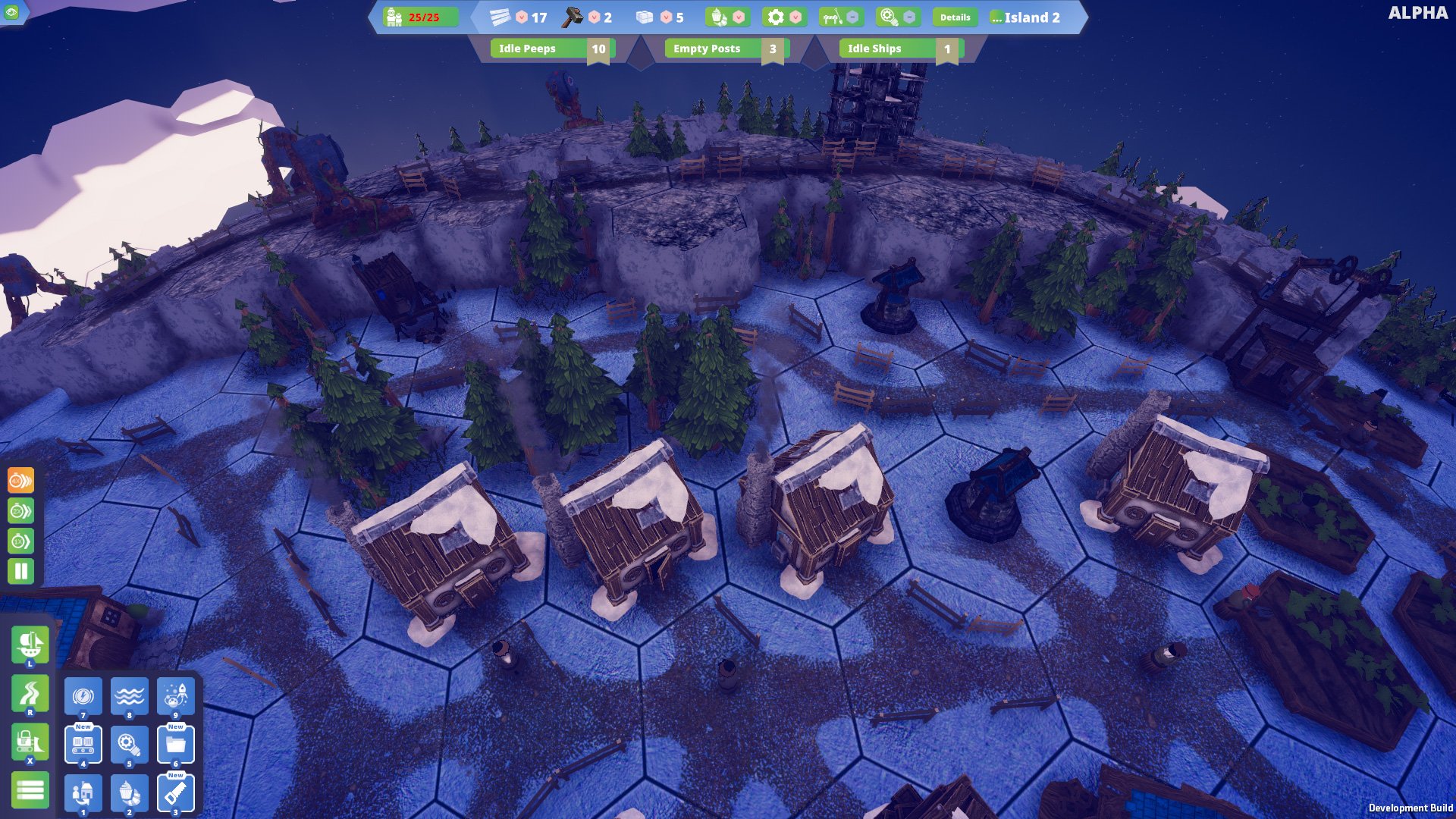 In my haste, I couldn’t strike the right balance. My second home, a snow-capped island, was relatively fine – I was able to research forgotten technology and unlock new buildings – but my third island, a desert outpost, was such a mess. My people were cranky and short-handed. I discovered a rocket ship, but assembling all the right off-site components to repair it felt like a lost cause. It would’ve been a slog.

With better planning from the get-go, I could’ve future-proofed my network. That’s the dream. Another dream: keeping pollution under control. If your machinery is left unchecked, it’ll gunk up the place.

The eventual promise of Before We Leave is that you’ll be able to send your colony to multiple planets, which could be really satisfying to pull off. There’s also talk of “planet-gobbling space whales.” Assuming the beasts aren’t too much of a nuisance, I’m looking forward to seeing them factor in.

It speaks volumes that after crippling my potato-eating empire, I’m still excited to start from scratch in the full game. The alpha build of Before We Leave isn’t the clearest, and the UI needs some touch-ups, but the core idea behind this city-builder is sound. If this looks like your kinda jam, it probably will be.