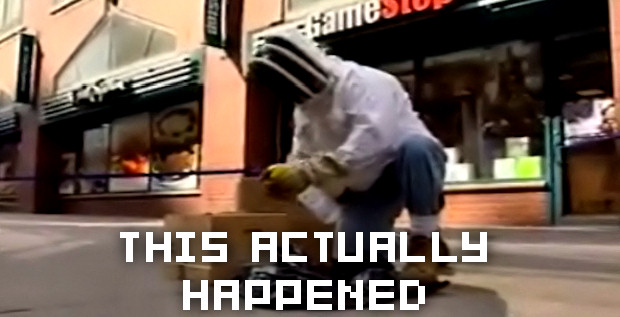 A GameStop in New York became an “urban jungle” this past weekend as a swarm of bees gathered outside like so many Fratboys at a Halo midnight launch. GameStop employees were trapped at 107 East 14th Street as thousands of sting-happy insects blocked their exit.

The infestation came from a hive situated between 4th Avenue and Irving Street, and the GameStop workers found themselves unable to escape for over two hours, while a news outlet attempted to call emergency services and was shunted from one group of people to another. In the meantime, one man attempted to be a hero and somehow trapped almost a thousand bees in a bag, which was then put into a box. It was a mere drop in the ocean, however, with many more bees still swarming the area and posing a threat.

Eventually, NYPD bee expert Tony Planakis arrived to tackle the queen, although it’s not said whether or not he appeared in a Power Loader. “I’m probably gonna be relying on scent … the queen bee’s scent … it could take a half hour [to] an hour … two hours … I don’t know,” he said upon arrival.

The great irony of this is the fact that nobody was stung, which is odd because usually GameStop will sting anybody who goes in there, regardless of how many bees might be present.