If there’s one thing I know squat about, it’s the Naruto universe. It’s not because I don’t like anime — I love it, but the boy in the orange track suit and all his ninja buddies never really appealed to me. Maybe it’s because I grew up in a Dragonball Z era and felt like Naruto was trying to be the equivalent for a new generation, or perhaps my taste in Japanese animation had evolved away from the epic fighting formula that filled my teen years.

Regardless of my lack of interest, one thing’s for sure: I’ve always had a secret desire to spend some time with the series’ videogame adaptations. Their vibrant, colorful visuals appear to capture the essence of controlling your own action-packed anime episode — at least from the trailers I’ve seen — so when the chance to check out the latest game in the series, Naruto Shippuden: Ultimate Ninja Storm Generations, arose I quickly volunteered myself for the task. 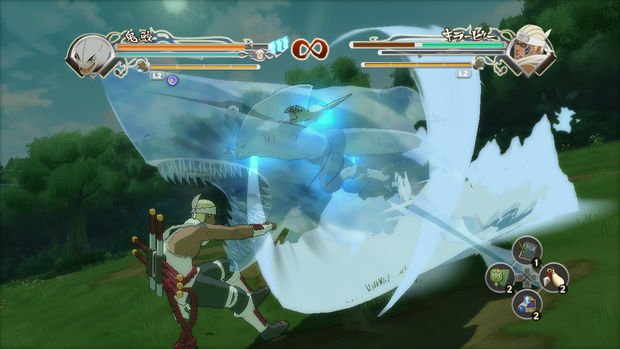 Bridging the old with the new

So what would a Naruto game be without at least four different versions of the Hokage hopeful to duke it out with? With all the different styles, there’s a version of Naruto for everyone, but really it’s only the icing on the cake for fans of the franchise. On top of Narutos’ pouring out of every orifice of Generations, there are another 70 fighters (and 15 support characters) from the original series and Shippuden to chose from. Many favorites that have appeared in both games make the return in this, the third in the Ultimate series, but given that the first game was a PlayStation 3 exclusive a good number of the returnees will feel new to folks that only owned an Xbox 360 or played the second game. 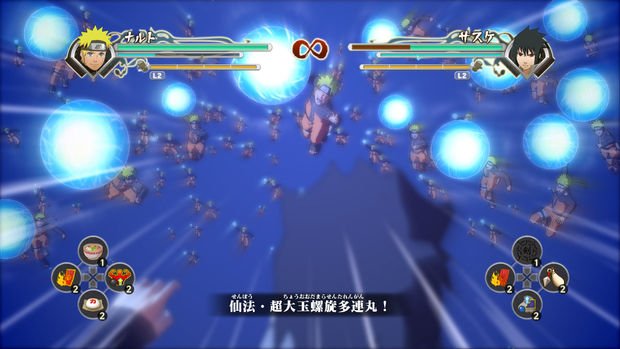 Having the fighters from both games in one sleek, shiny new package is nice (unless you already own the two prequels) but CyberConnect2 has myriad content packed in to hopefully appease everyone. For starters, the story mode has seen some refinements and instead focuses on the game’s core mechanic — the combat. Whether it was picking flowers in a field or engaging in boss fights that limited a player’s available move-set, the past Ultimate games often broke up the action with quaint RPG additons  — something Namco told me during my preview fans found less than desirable to play.

To offset the removal of the RPG aspects from the single-player, Generations includes over an hour of all-new animation for the 11 different stories that take players through Naruto’s past and present. While most of the stories overlap, two highly requested characters, Zabuza and Haku, are finally playable, which is sure to make many happy. The final touch for fans in Generations is the inclusion of both Japanese and English voiceovers by the same actors as the anime.

Fine tuned for the fighting fan.

While there is plenty of Naruto fan service in Generations, why should a fighting game enthusiast care about the latest in this series? For most devoted fighters, the game is kind of a hard sell. Each character’s inputs are identical to one another (similar to the Super Smash Bros. series) and because of that the game lacks the potential to be as technically deep as the top-tier genre titles. It’s understandable, considering that developing and balancing individual move sets for such a large roster is a monumental task, and it would limit the enjoyment of trying to learn and remember every character’s combos. But, even so, CyberConnect2 has found room to make the game more than just a button masher. 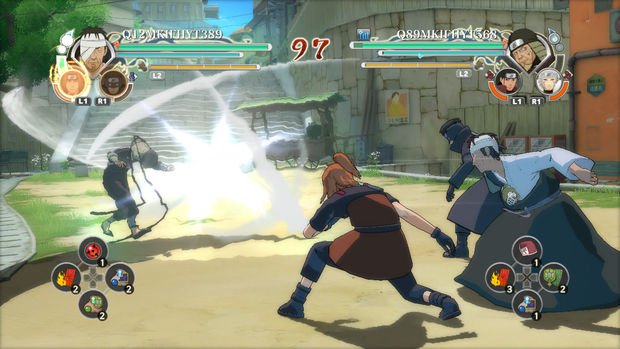 The biggest addition to Generations‘ combat is the ability to dash-cancel from any combo. Previous games locked players into a move once it was initiated and therefore kept the combat very one-dimensional. Performing the new move is easy (though I wasn’t pulling 50-hit combo strings together like the ringer Namco brought to battle me) and it helped me get out of few intense situations during matches. If you’ve played past games, or seen the trailers for Generations, it’s easy to see just how crazy and hectic fights can be with all the screen-filling nonsense that takes place. Having an extra defensive tactic like the dash-cancel goes a long way to keeping each fight fresh and rewarding.

Beyond all the crazy Jutsu attacks, ninja support items, and backup characters that have made the series what it is today, Generations also offers the same depth in the online department a fighting game player would come to expect in a game like Soul Calibur V. Tournament mode, online lobbies, downloading replays, and the ability to watch matches while you wait are all included. The game’s combat may not be as deep on the surface as other fighters, but that doesn’t mean the online components have to be as shallow.

Perhaps the most unique aspect to Generations is its connection to a new Naruto card game that is coming out. Coinciding with the release of the video game, each card in the collectible card game (similar to Pokemon TCG or Yu-Gi-Oh!) contains a unique code that can be directly input into the game. 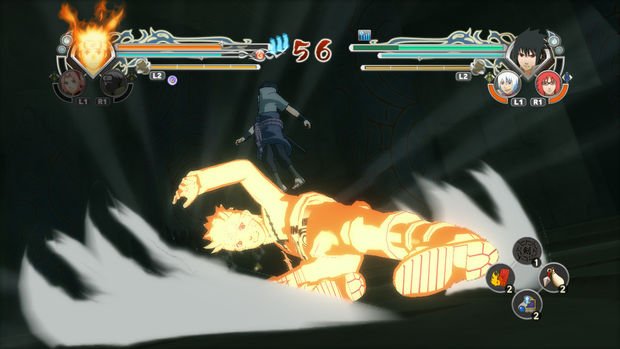 How this works with the game is in its online battle system. Every player has a Ninja card that they can customize with a title and some specific power-up that relates to one of the cards — 600 in all — from the card game. These power-ups (which can contain some sort of stat boost to speed or health for example) aren’t directly given to the player at the start of the battle, but instead rewarded if their card’s element defeats their opponent’s card’s element before the match. While players who buy packs of the card game will have access to specific stat boosts for their characters more quickly, those who choose not to buy the cards will still be able to unlock them over the course of the game.

At first, this seems to give those with more disposable income an advantage, but what I found especially cool about the feature is that even though someone may have a card that gives a stronger bonus, they are not necessarily guaranteed it based on its strength alone. It’s all very rock-paper-scissors in its implementation, but something that fits Generation’s dynamics quite well… and at the very least offers gamers another way to enjoy the Naruto universe. 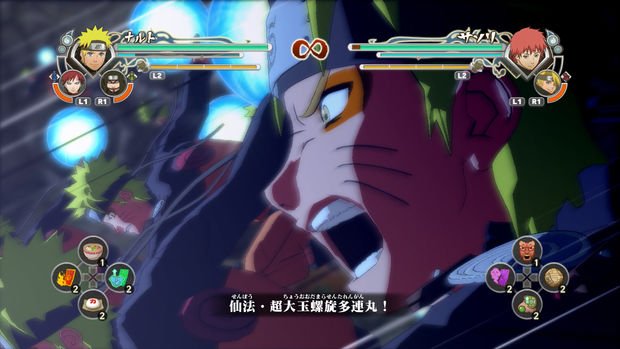 Naruto Shippuden: Ultimate Ninja Storm Generations is a game that, on the surface, has a very limited appeal outside of its fan base. It’s a crazy and over-the-top brawler with a huge cast of characters that, frankly, is a little overwhelming to non-fans. But tucked behind all its anime ancestry, is a sequel to a series that is looking to bridge much more than two Naruto generations together. With all its bells and whistles, it’s looking to open up a world of fighting games to a generation that maybe missed the genre’s boom in the 90s. It’s worth keeping an eye on when it lands on March 13th.