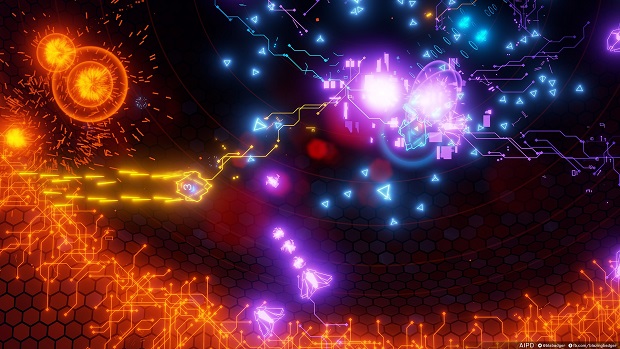 This GDC trailer is chock-full of glowey, shooty twin-stick goodness

Artificial Intelligence Police Department, or AIPD for short, is an upcoming top-down, twin-stick shooter from Frankfurt-based studio Blazing Badger. It recently released this luminous new trailer for its debut title in preparation for this year’s GDC in San Francisco. If you’re attending the conference, make sure to drop by the Unreal Engine booth to try it out the prototype for yourself.

AIPD‘s running on Unreal Engine 4, and I’m loving what the studio is doing with it. Although, the game is going for a retro-inspired look, the lighting being used makes the visuals pop and helps give the title a very contemporary appearance. Blazing Badger describes the look as an “homage to the ’80s neon art styles, pioneered by games like Mine Storm on the Vectrex console.” Feature films such as Tron are also listed as influencing the game’s aesthetic.

Core features include configurable game modes (up to 100,000 possible combinations), customizable ship loadouts, four-person cooperative play, online leaderboards, and timed challenges. The company says that AIPD should be available “soon” and lists a probable May release window on the title’s PR page. Planned platforms include PC, PS4, and Xbox One.