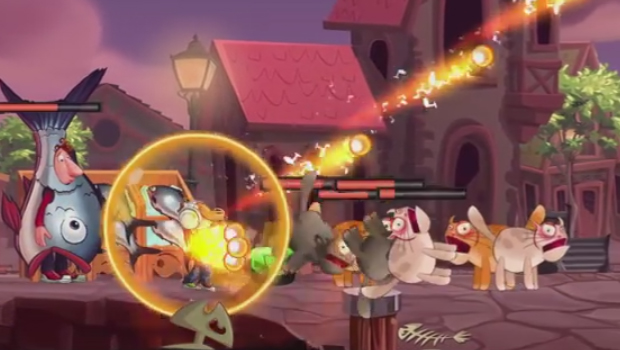 I was caught a bit off-guard by this, the launch trailer for BeatBlasters III, available now for Windows, Mac and Linux in Steam and DRM-free versions. The title and art direction failed to strike a chord with me. And then at some point I realized that the video was winning me over and I now needed to play this thing and fully understand what it was.

Thankfully, there’s also a demo on Steam, offering a few levels at two difficulty settings. You play as either Joey or Gina, two hip kids who have found themselves in a strange homage to Footloose before landing in a magical forest where they are taught how to use the power of rhythm by a shifty-eyed, too cheerful magical mushroom guy named Todd. And that’s not even close to the weirdest thing that happens.

Put simply, BeatBlasters III is a platform/puzzle game in which players are given three basic abilities, an attack, a shield and a movement boost, and asked to use those abilities to fight enemies and defend allies. Your have a limited supply of energy to use the abilities, and they can be recharged through a light beat-matching mechanic in which tapping ability buttons in time with the music restores the use of powers.

The platforming elements leave a bit to be desired, but the powers are fun and the level objectives are tailored to their use. Based on the demo, I’d be somewhat concerned that stages would get repetitive, running out of clever ideas for things to do with these basic powers, but I had a surprisingly good time with what I played. I’d suggest you take a peek if you’re into the idea of a platform game backed up by rhythm.